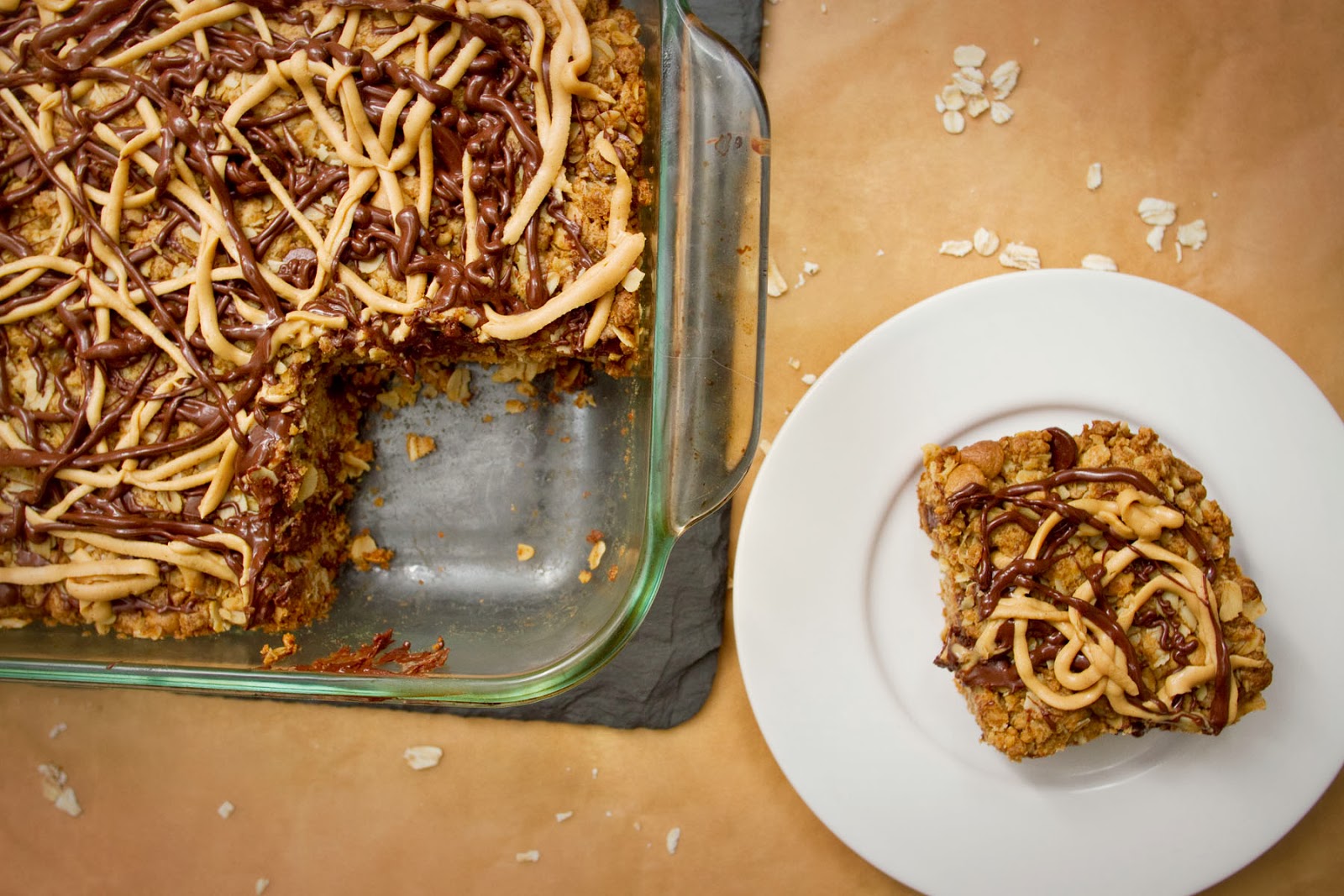 Cookie Butter. Speculoos. Biscoff Spread. Whatever you call this delightful, creamy, gingerbread-y spread, it's incredible. A peanut-butter-like spread made almost entirely from cookies? Yes please. And when you team it up with nutty, complex brown butter? And then throw some peanut butter and chocolate chips in there? Down right gluttonous. Definitely sinful. And completely delightful. 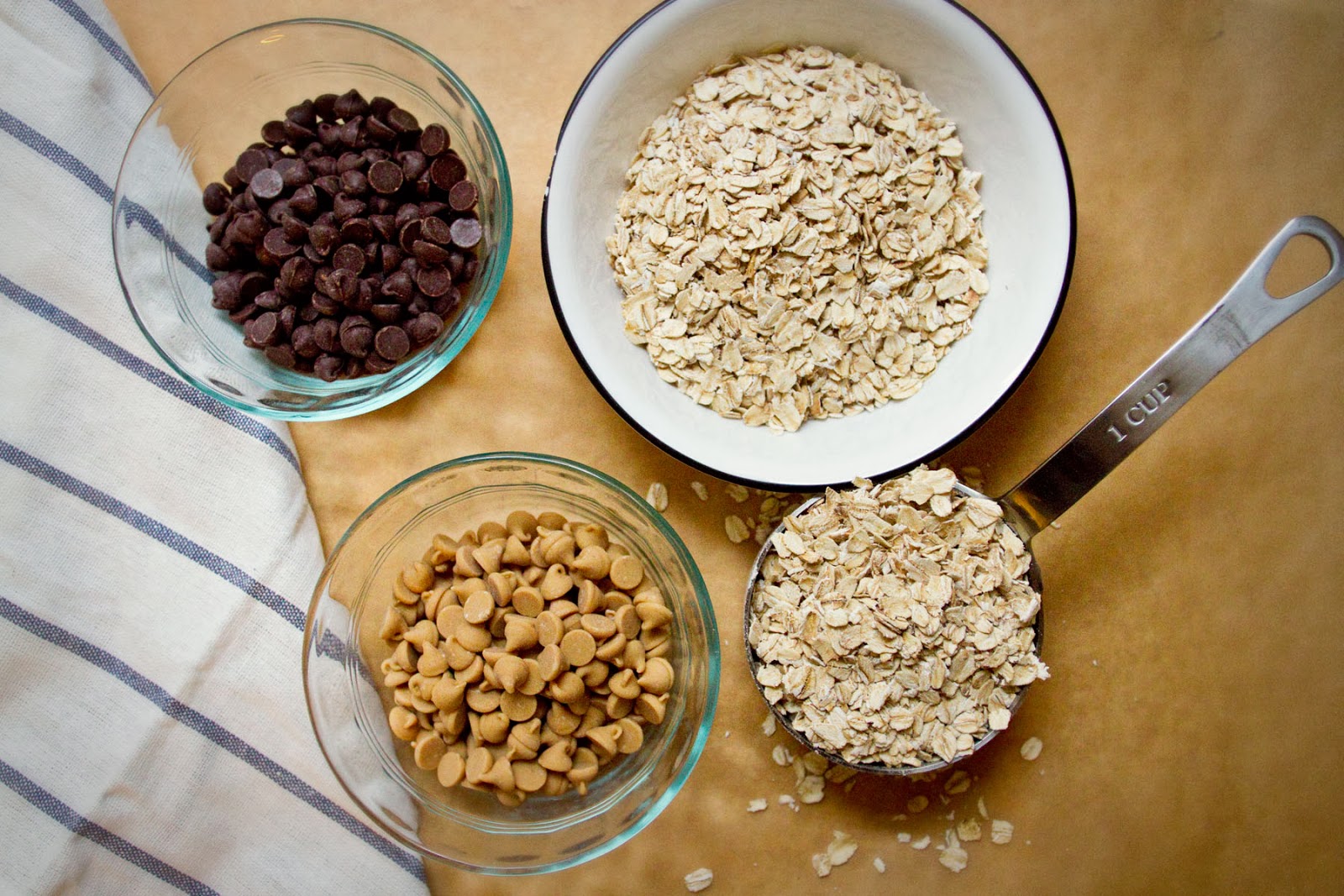 I made these Saturday, intending them to be a treat for S and I for dessert, and to take to work on Monday, but while they were in the oven S's friend invited us to a Superbowl Party, and I figured it was dessert destiny. These bars are definitely decadent enough to hold their own in a Superbowl spread. 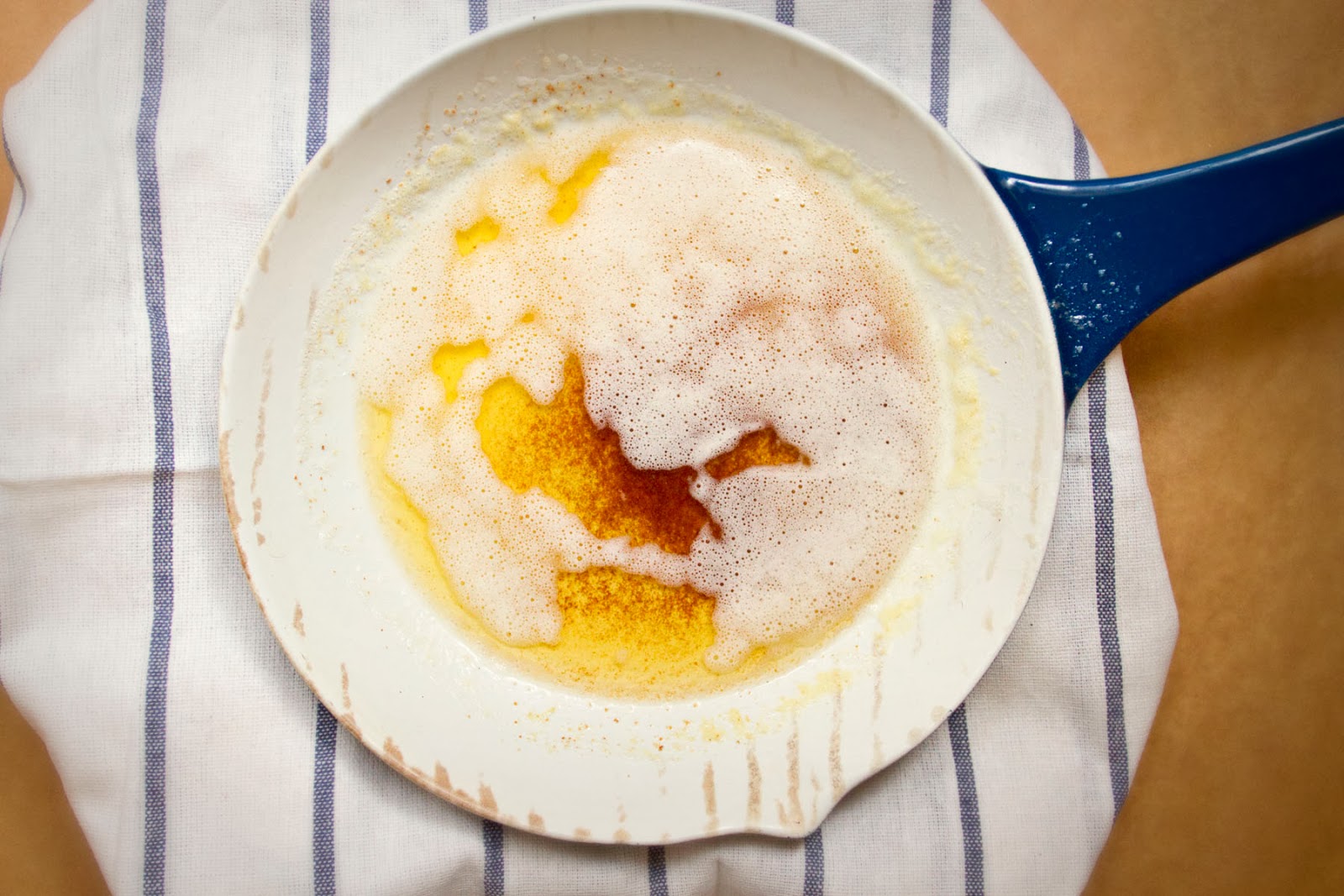 The truth is, S and I both don't care about football. I'm from Cleveland, we colloquially call our stadium the Factory of Sadness. Don't get me wrong, lots of people still love football, and the Browns, I just always found it hard to get enthused about a sport my own city was terrible at. I enjoyed high school football, although mostly just for the parties afterwards. S's high school didn't even have football, and he's not interested in it. We're both baseball people. 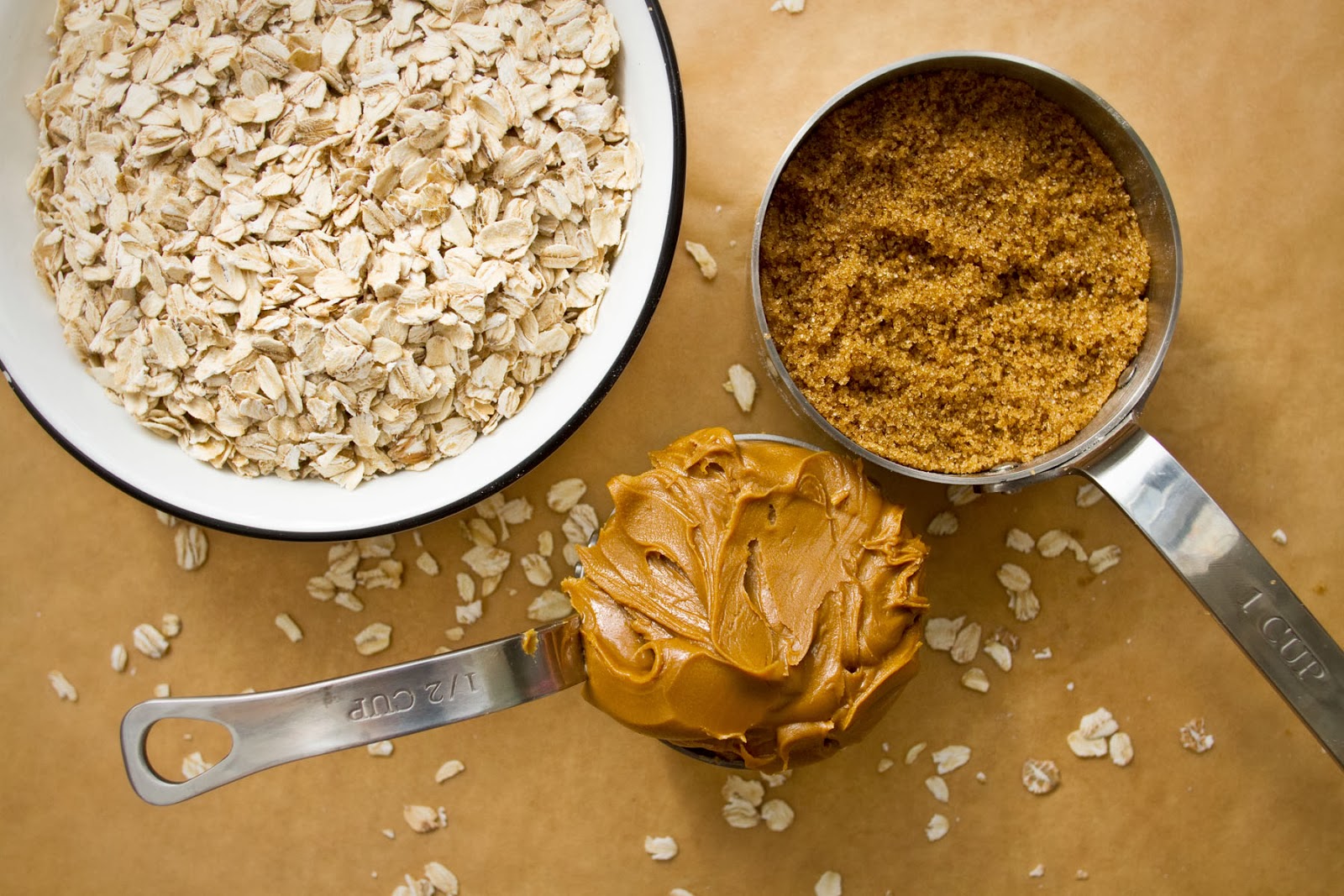 I decided I would root for the Seahawks because I lived in the Northwest for a while and have a strong allegiance to all things Washington related. That seemed like a good enough reason to pick a team. When we arrived at the party we discovered we were the only Seahawks supporters there, but everyone else took their loss in stride. Cookie butter bars helped ease their pain. New York can be a funny place. The party was at a friend's apartment in a high rise in Long Island City, surrounded by other high rises. He has a balcony with a spectacular view, and not being football fans, S and I stepped out there a few times to take in the view and get a breath of fresh air. All around we could see other people in other buildings watching the game on their flat screens, and from time to time a sudden cheer would split the air, coming from apartments in the buildings around us, the roof deck across the way, and the sidewalks below. Like surround sound excitement. 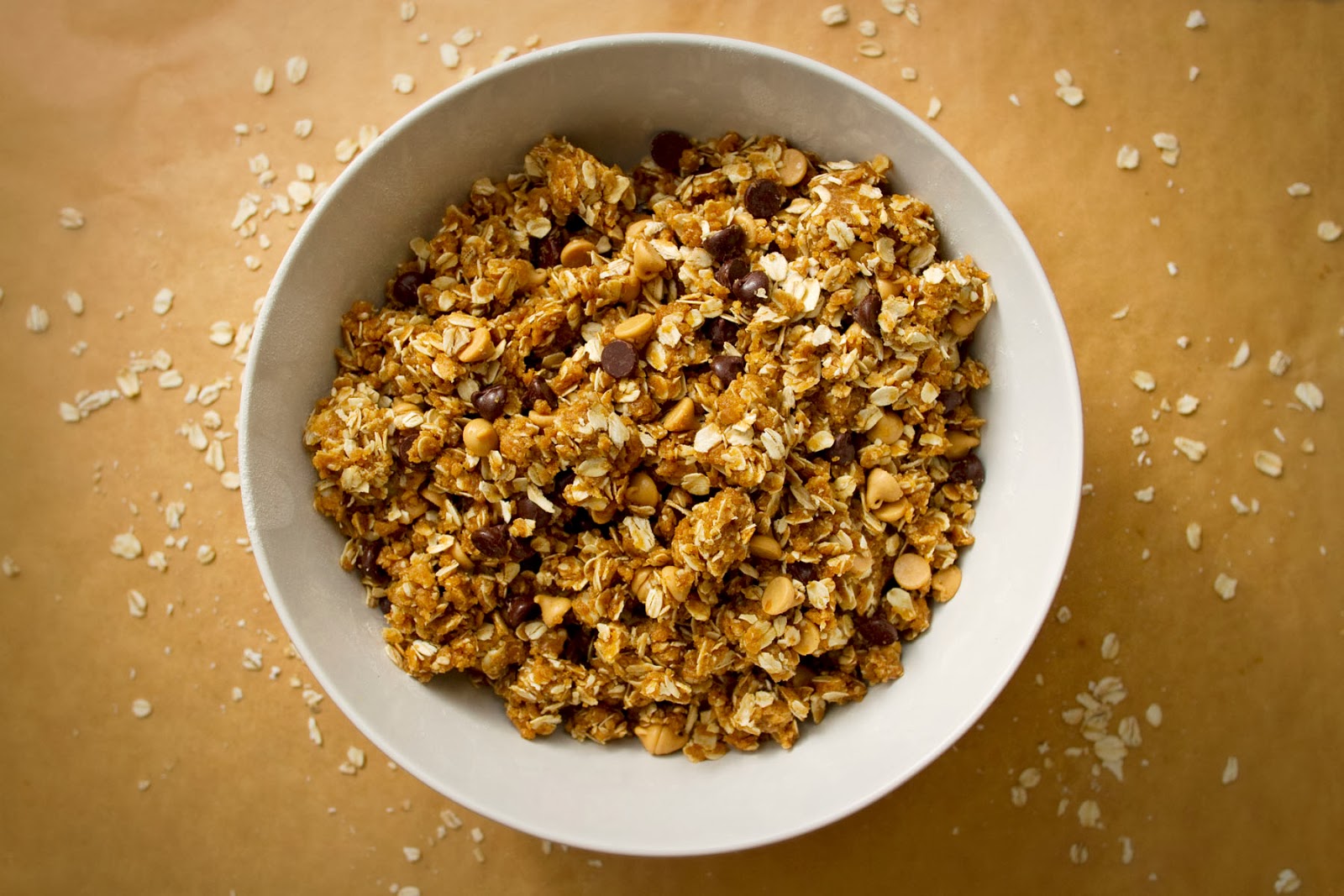 When an occasion comes along that is celebrated by a majority, or even a large minority of New Yorkers, things can get very festive. Imagine every really drunk guy you've ever seen get overly enthusiastic about a holiday, or sports game, or anything really. That guy who takes the Christmas party drinking way too far. Who shows up with Christmas ornaments dangling from his ears and an elf hat, but by the end of the night is wearing Santa's pants and boots with no shirt. The guy who keeps bear hugging everyone and slurring through the lyrics to All I Want for Christmas. Now imagine you're in a crowded subway car with 20 of those guys, after their team lost a big football game. That's what a festive night in New York can be like. 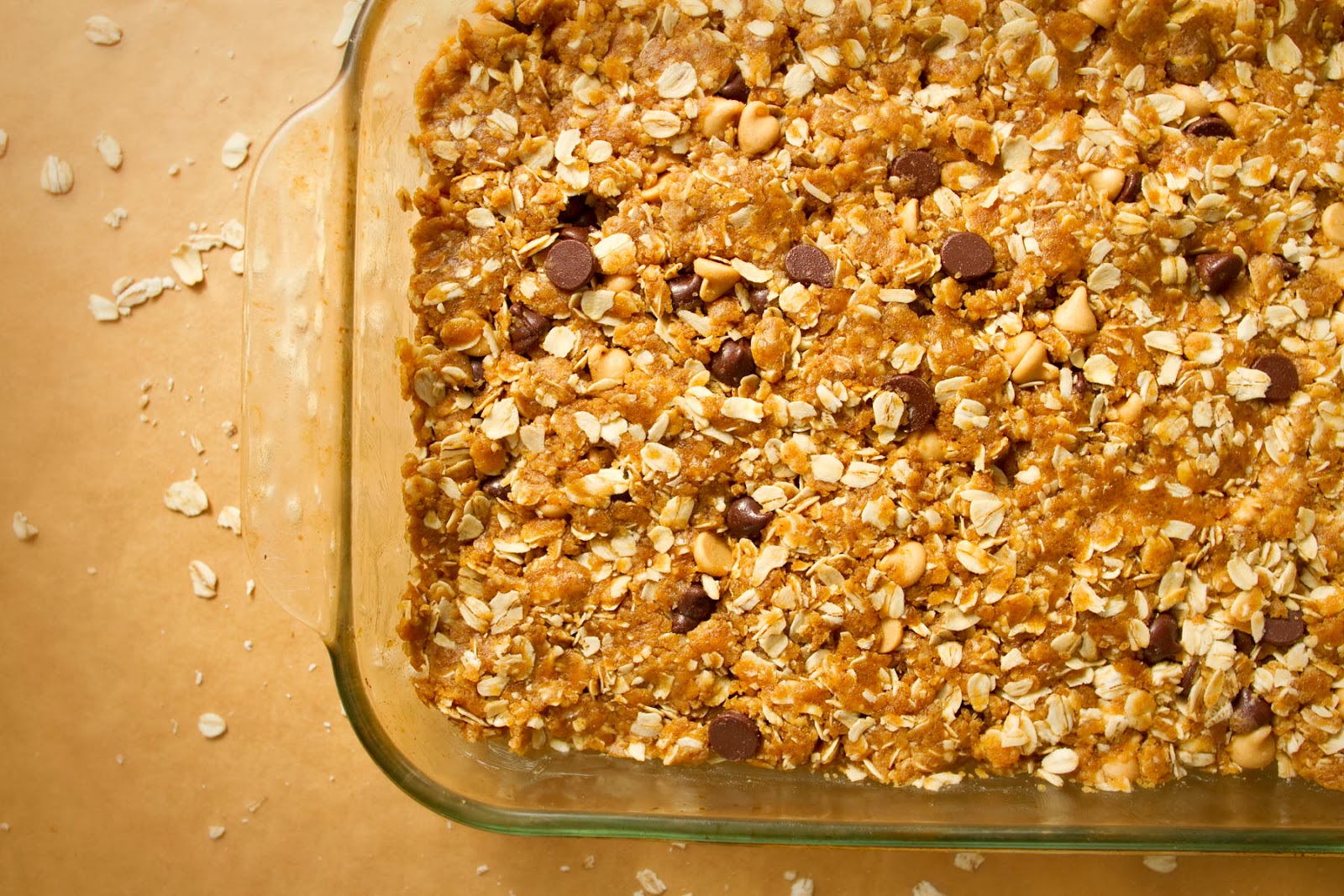 On the walk back to the subway after the game we heard a pack of women cheering and screaming. I'm referring to them as a pack because I couldn't see them, but judging from their screams they numbered at least ten. It sounded like they were cheering and screaming whilst running too, furthering my imagining that they were a pack of women, bounding along like wolves, leaping up to howl at the moon because the Seahawks won?
"I bet that's what it's like here every Sunday." S said.
In Chinatown no one cheers about anything in the street, except the New Year. Speaking of which, Happy Year of the Horse! 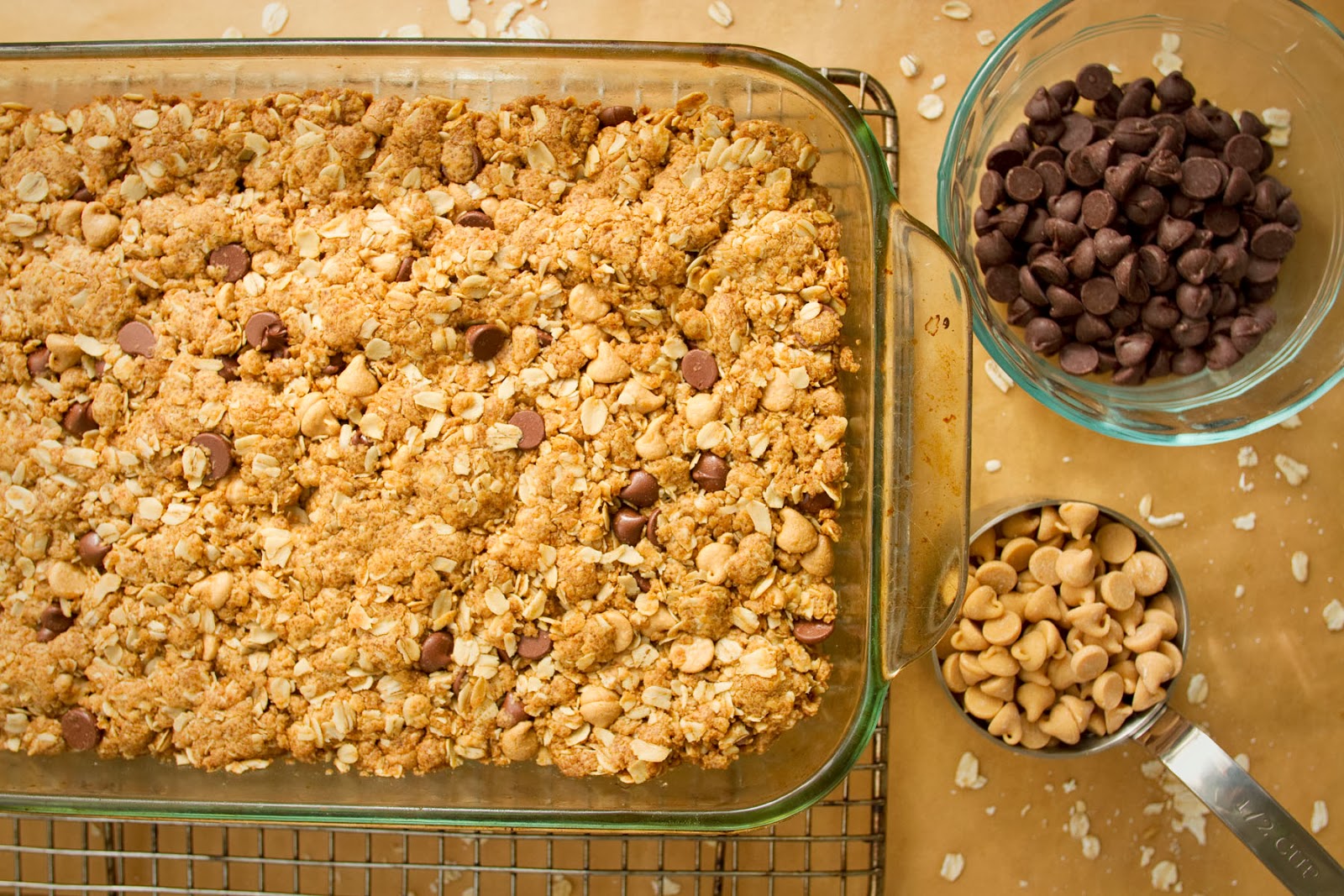 These bars were incredible. Seriously, the crunchy, crumbly oat bits, the nutty, complex brown butter, the peanut butter and chocolate chips! The drizzled topping! Ugh, it was all great. 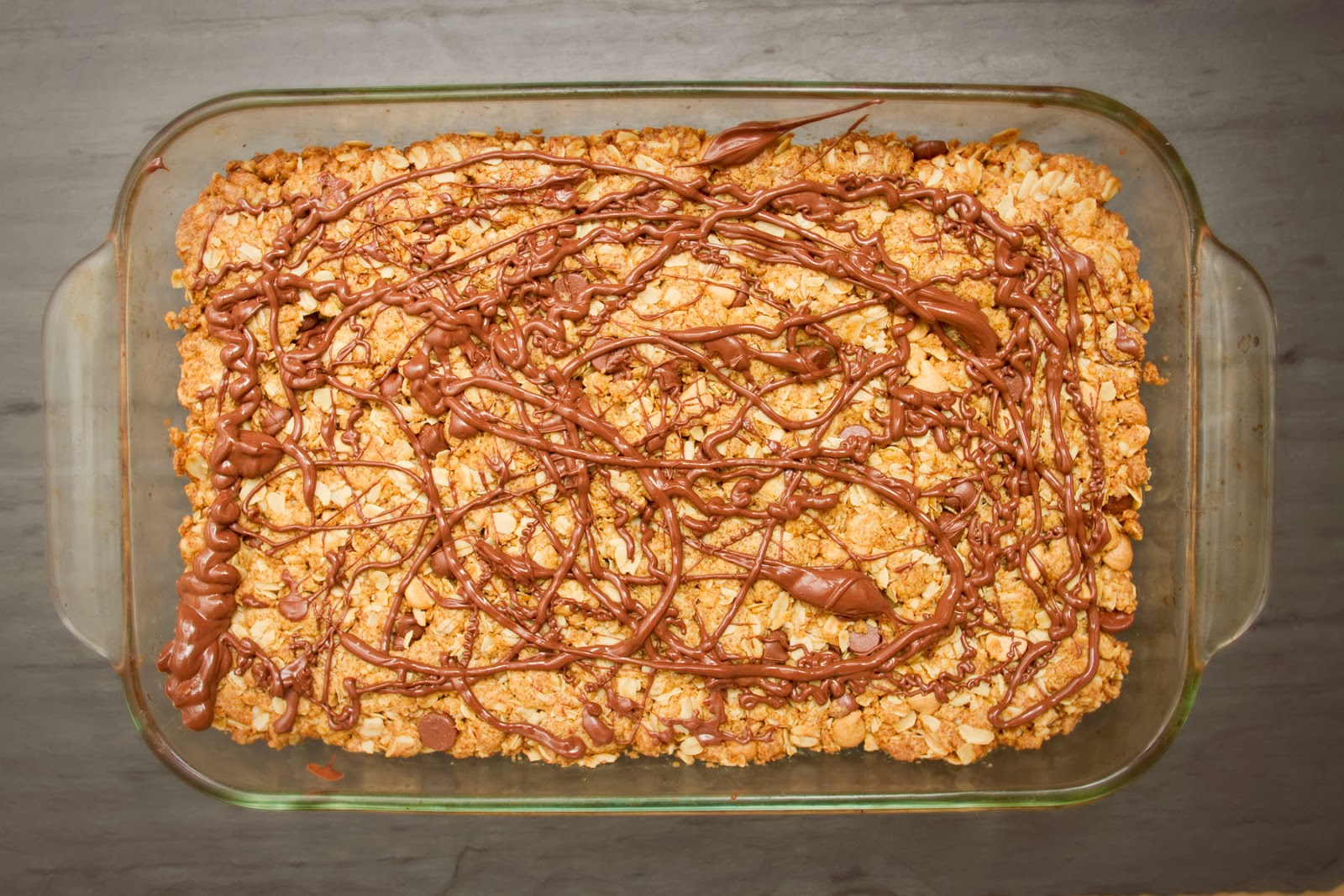 These would make a fantastic Valentines treat for anyone who likes cookie butter, peanut butter, chocolate, or all things decadent and wonderful. You could even draw little peanut butter and chocolate hearts all over the top with the drizzle. 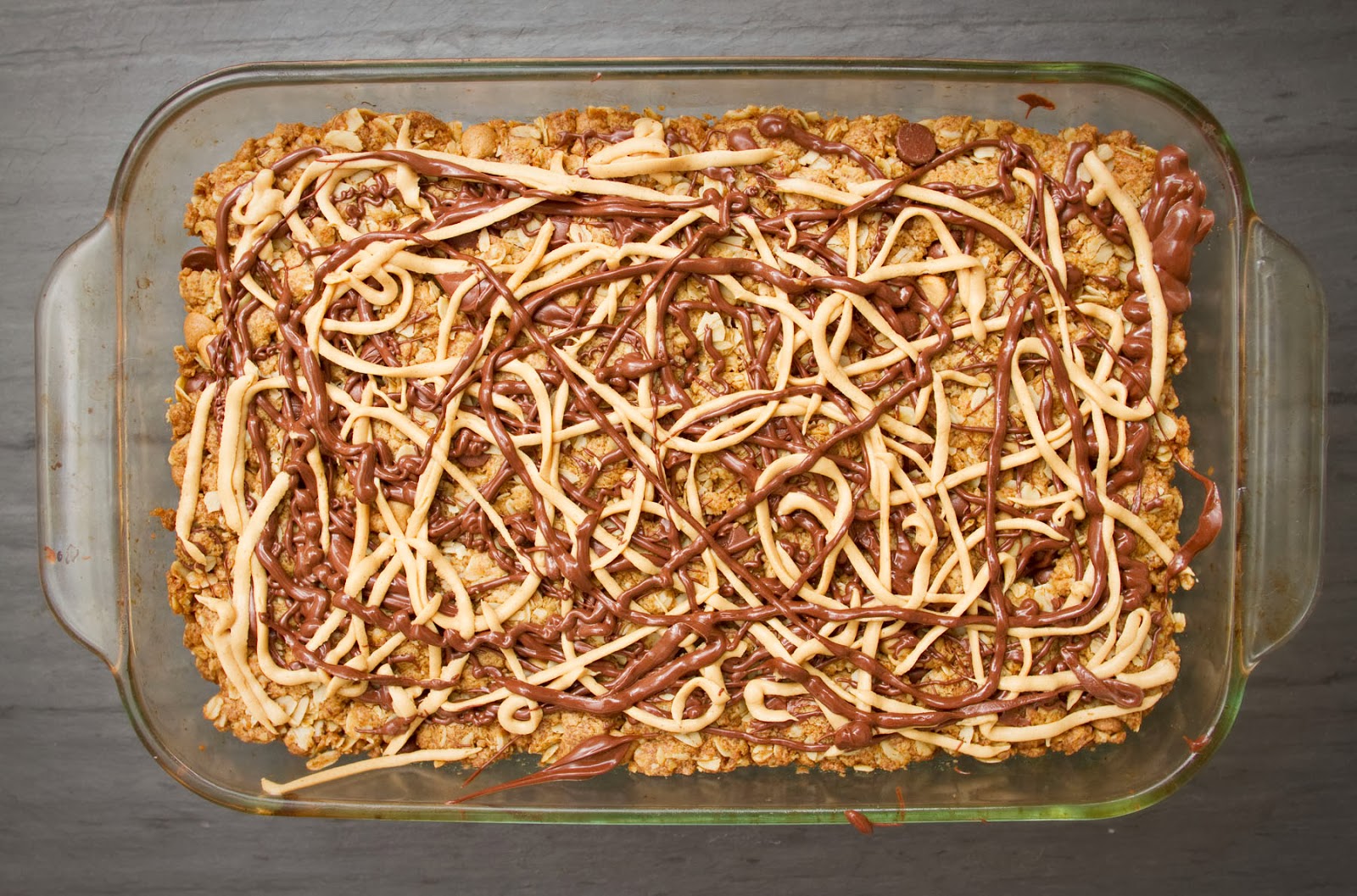 If you let these cool fully after topping them the chocolate and peanut butter will firm up and the bars will travel well, but if you're not too worried about aesthetics then I recommend you eat some while they're still warm. I ate the one photographed below after taking this photo and it was incredible. The melty chocolate and peanut butter chips! The crisp oats! Absolutely heavenly. 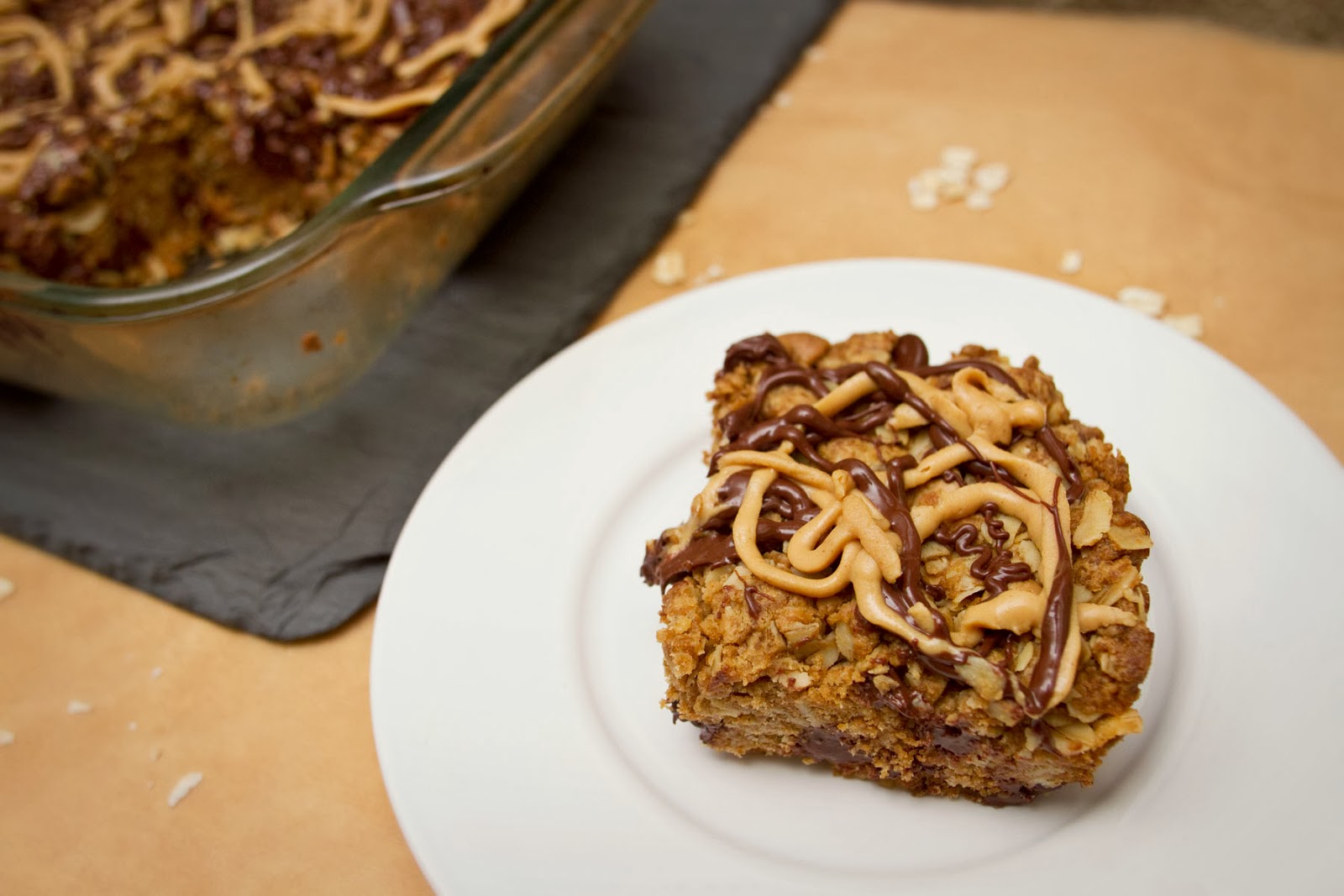 Preheat oven to 350 Degrees Fahrenheit
Cut butter into chunks and place in a frying pan over low heat, until butter is melted. Mix occasionally, once melted, keep your eye on the butter and mix it from time to time as it continues to cook. After about five minutes the butter will begin to smell nutty and delicious, and there will be little brown particles in the butter, when this happens remove the butter from heat immediately as it will continue to brown on it's own for a moment. Set aside to cool a bit.

In the bowl of a stand mixer, add the brown sugar and browned butter. Mix on a medium speed until fully combined, about 3 minutes. Add the cookie butter and mix again, then add the egg and vanilla and mix until smooth.

Add the dry ingredients in stages, mixing between each addition, until fully combined. Fold in 1/2 C chocolate chips, and 1/2 C peanut butter chips. Mixture should be a bunch of little clumps of dough.

Grease a rectangular pan and pour the dough mixture in, smooth it out and press it down with your fingers until it covers the pan, forming a solid bar. Don't leave it as a bunch of loose crumblies, smoosh them together and make a cake out of them.

Once out of the oven, set on a rack to cool, and make the topping.

In a double boiler, or a heat proof bowl placed in a pot of simmering water, melt a 1/2 C chocolate chips. Heat over low heat and mix until fully melted. Using a spoon, butter knife, pastry bag (with a teeny tiny nozzle), or a zip lock with the very tip of the corner cut off (I did this), drizzle the melty chocolate all over the bar.

In another heat proof bowl, place 1/2 C peanut butter chips and set over lightly simmering water, mix until well melted. If they aren't melting into a liquid (mine were more like a paste), add the 1 tsp coconut oil and mix well, this should thin it out, and coconut oil will re-solidify easily. Place in pastry bag, ziploc with cut corner, or use a spoon to drizzle over top of the chocolate swirls.

Set aside to cool, chocolate and peanut butter will firm up in a few hours, but they're delicious before fully hardened too! 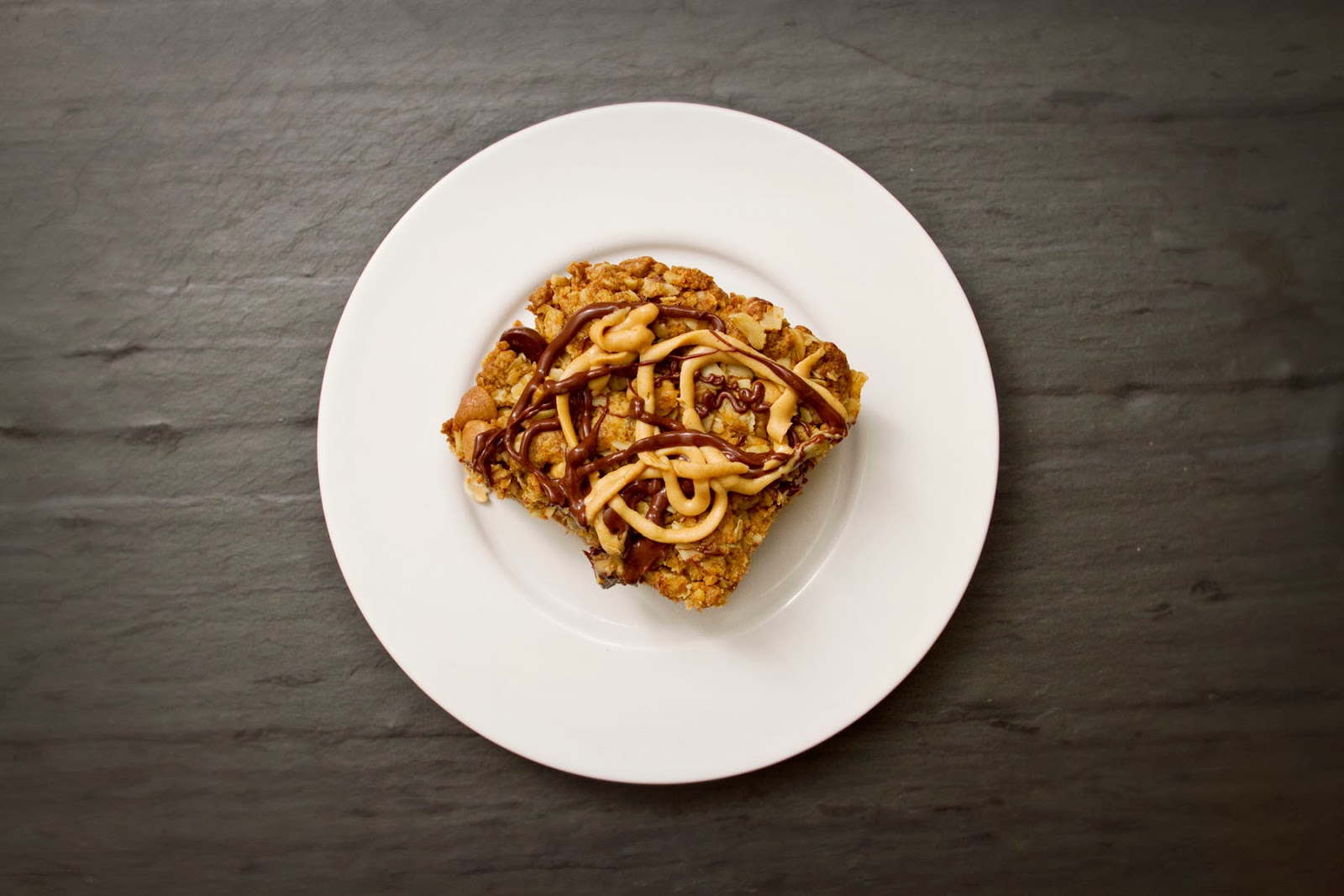 Posted by Little Market Kitchen at 8:36 AM