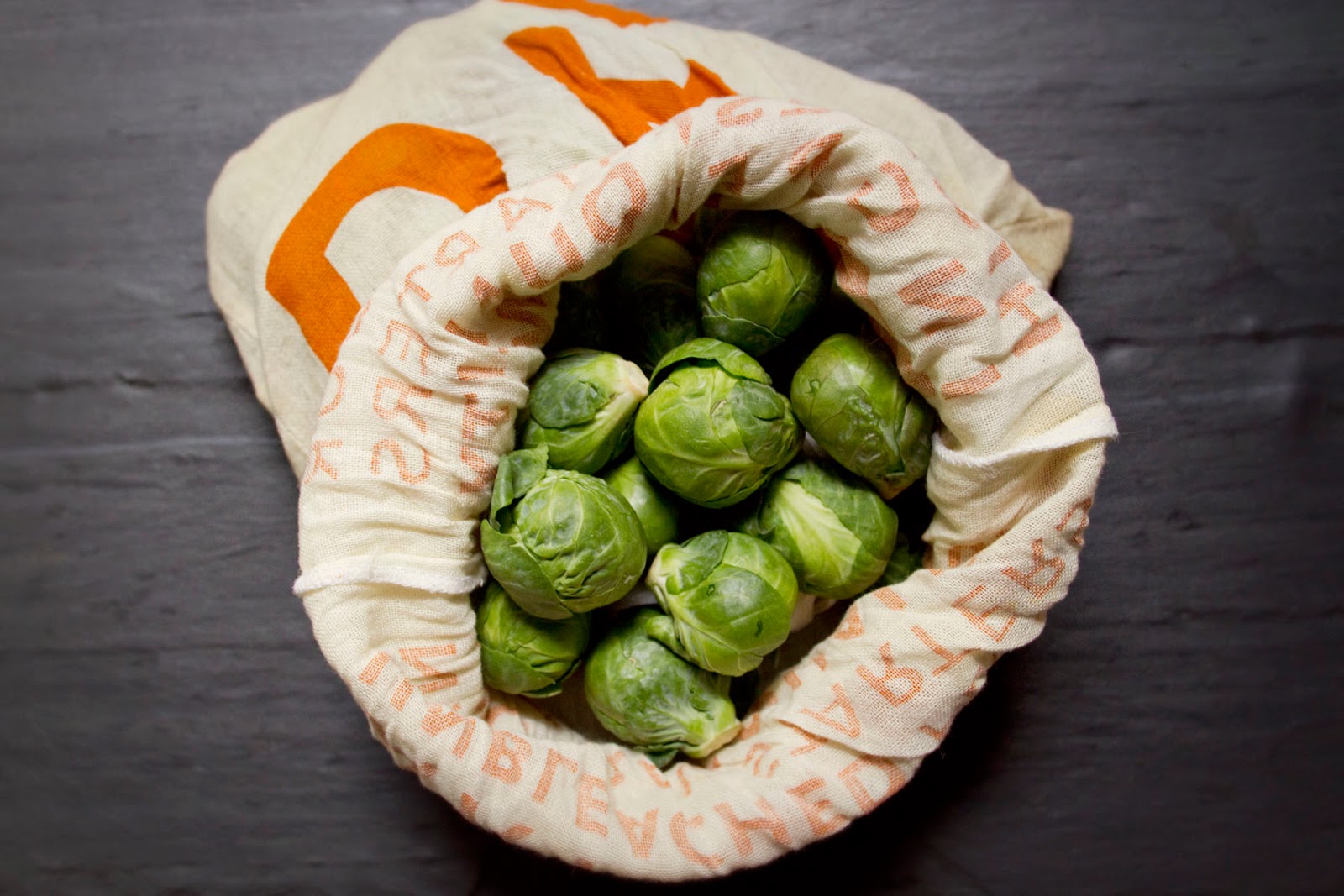 Brussels Sprouts are one of my favorite vegetables. My parents never cooked them when I was growing up, and I seem to remember there used to be a bit of a stigma about brussels sprouts in general, they're definitely the type of food cartoons and kids tv shows would portray as gross, inedible adult food. Which is completely opposite their current reputation as a very popular and tasty vegetable, perhaps even a hip one. I saw a recipe for a brussels sprout salad in GQ once, so they must be cool(?). 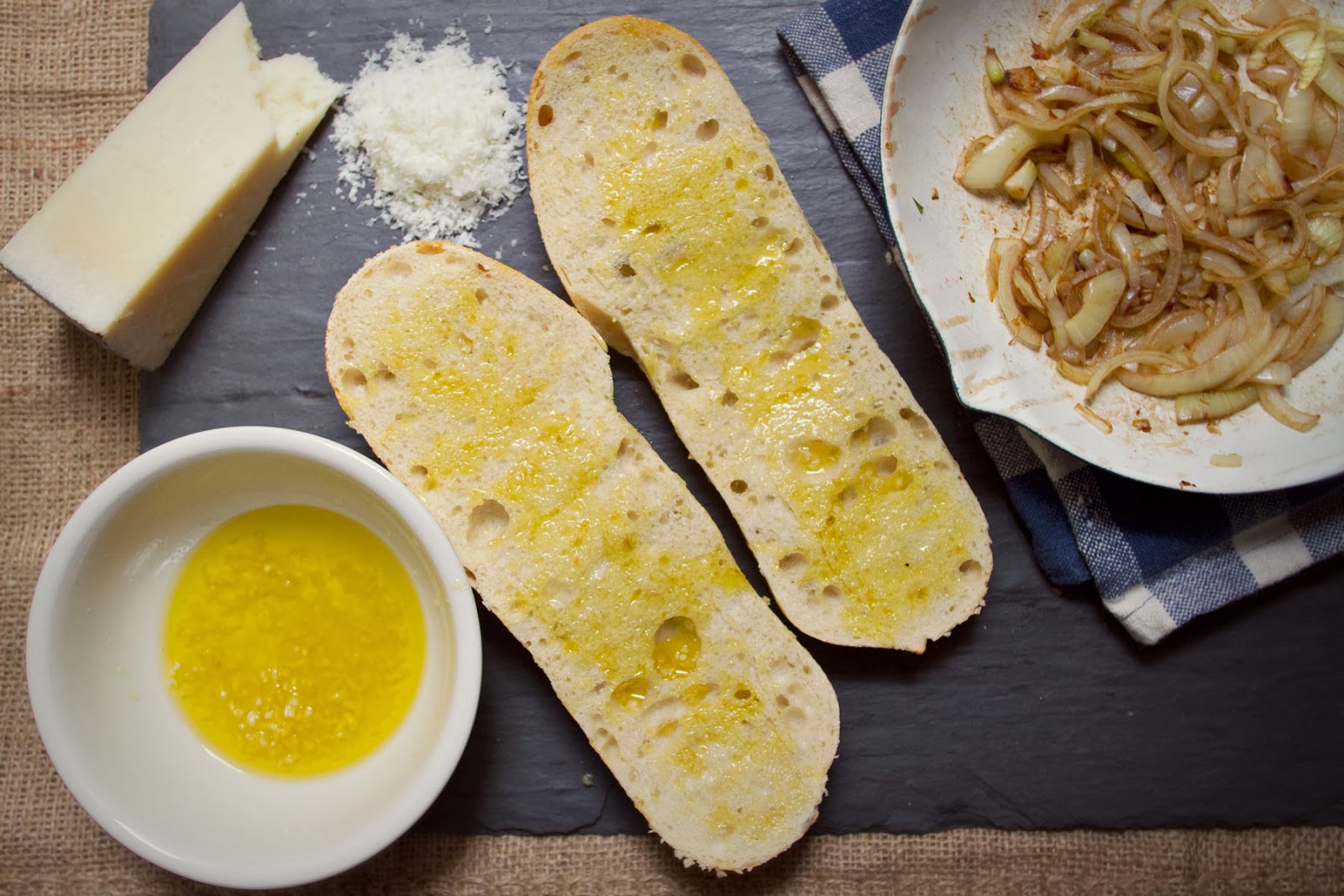 I prepare my brussels lots of ways, roasted whole and tossed with balsamic reduction, sliced thin and wilted with lemon juice in a skillet, shredded, fried and tossed with wheat berries, but one fantastic, stand out, totally awesome way to eat brussels sprouts is on pizza. 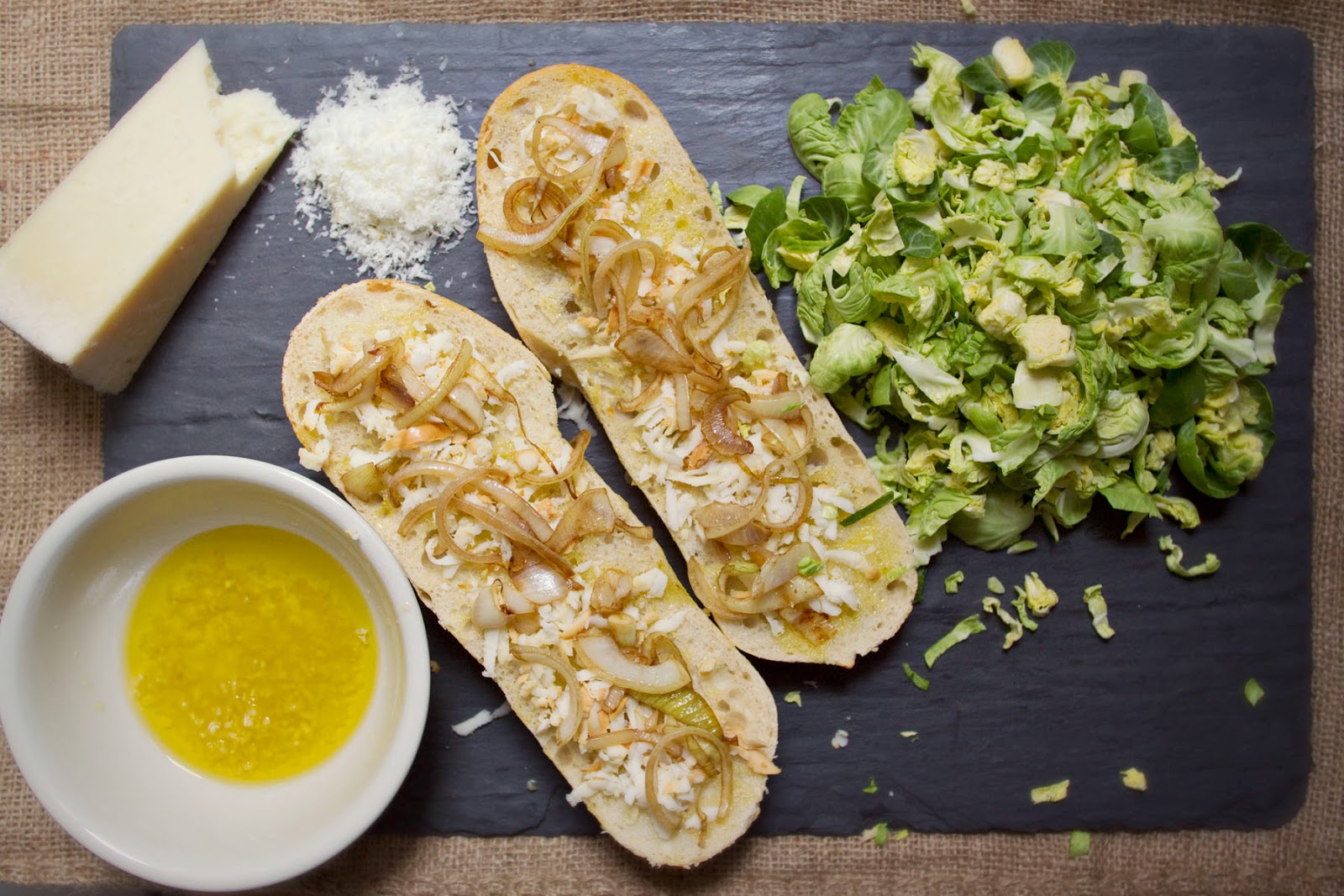 I'm not afraid to admit I was introduced to the concept of brussels on pizza by two preteen gals I know. Their favorite pizza to order in is the Brussels Sprout pizza from Motorino, the first time I tried a slice I knew I had to recreate it, with a few changes. 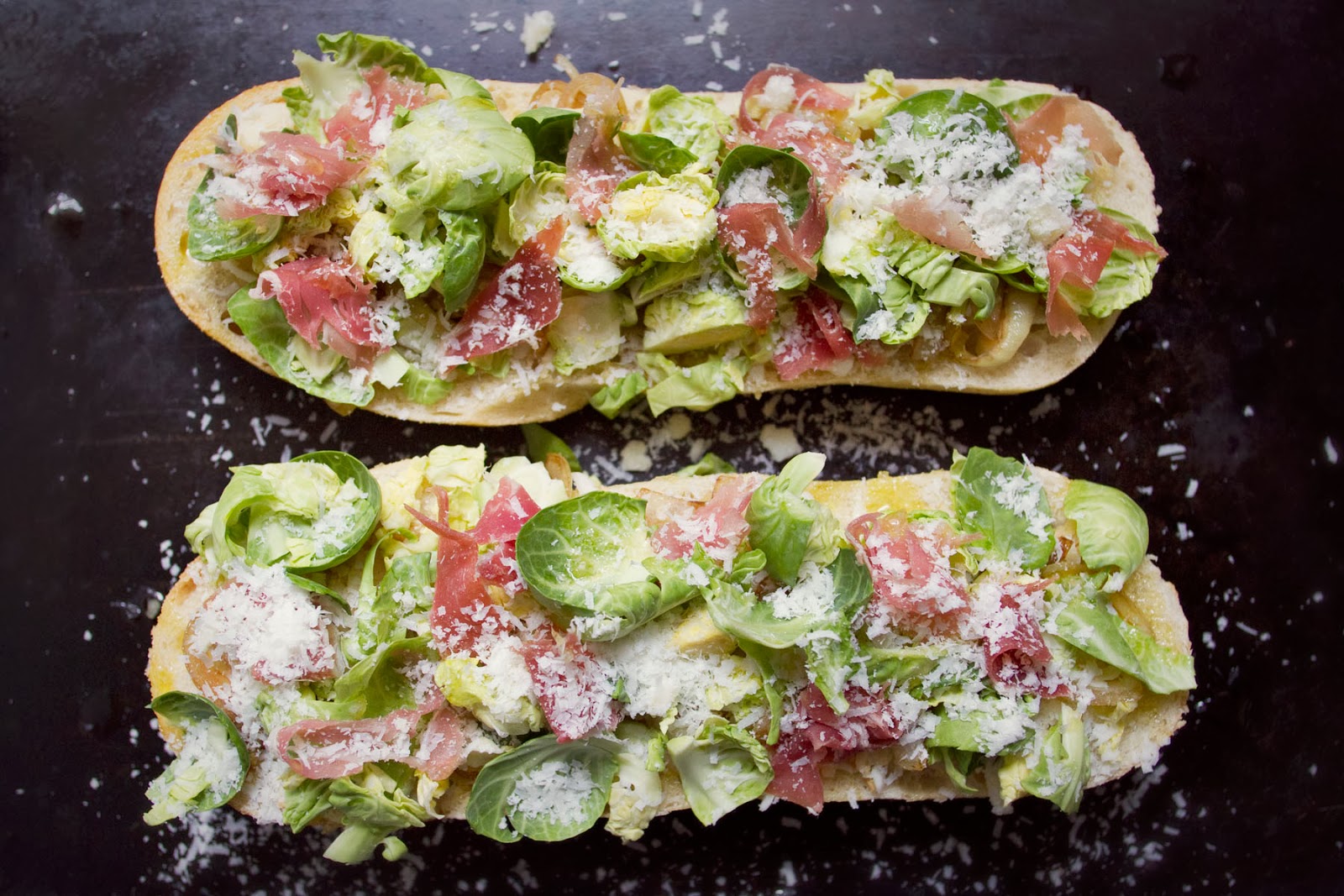 When I make it as a normal pizza, I use Jim Laheys no-knead dough recipe, but the other day I had a craving for this pizza, and no dough. I could've made dough, but pizza dough needs to rise and my craving for brussels sprout pizza was strong. My stomach gets very impatient. 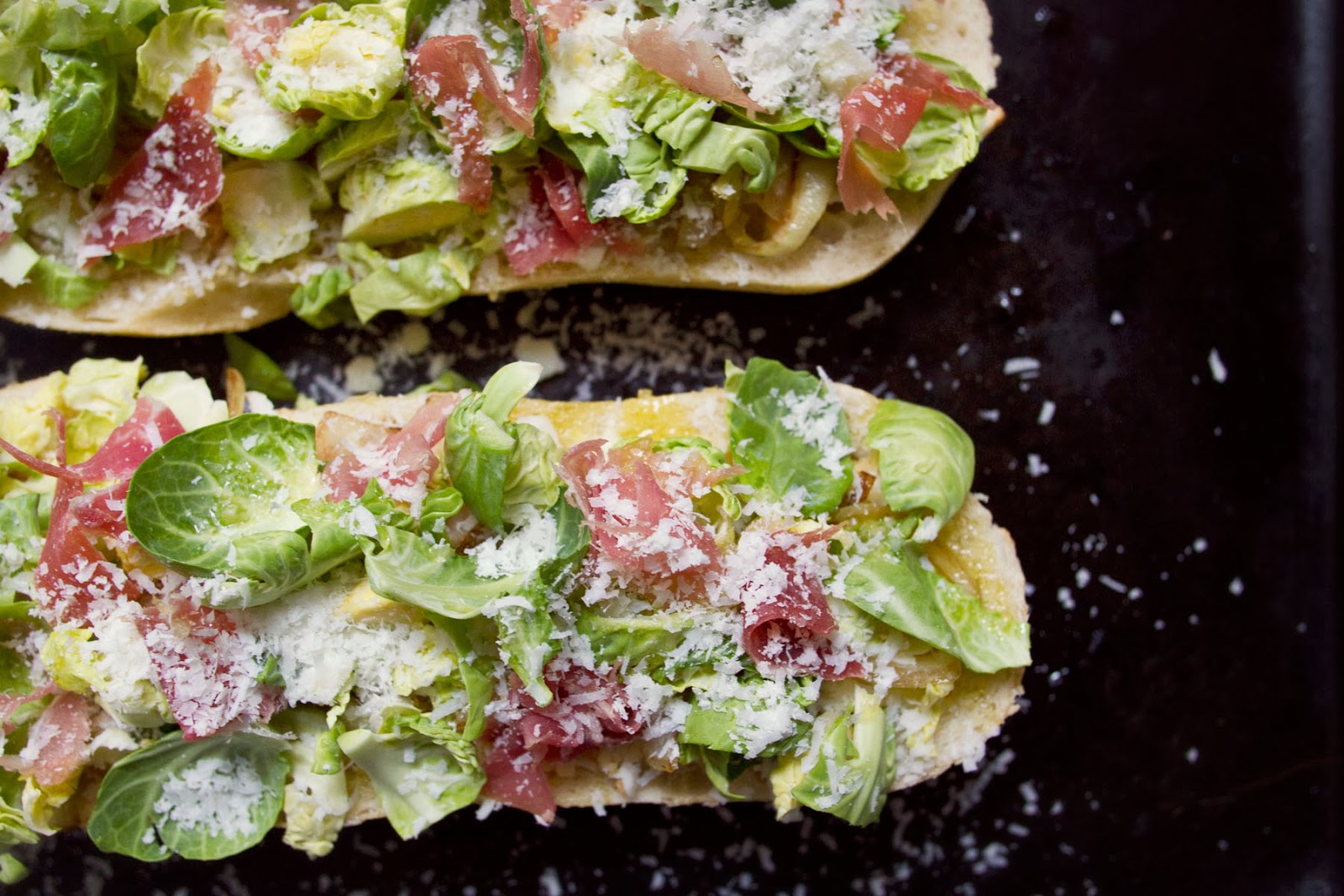 So I grabbed a few mini baguettes and made these for dinner. Ok, fine, I made one for myself for lunch, and then I made them again for dinner because they were that good. 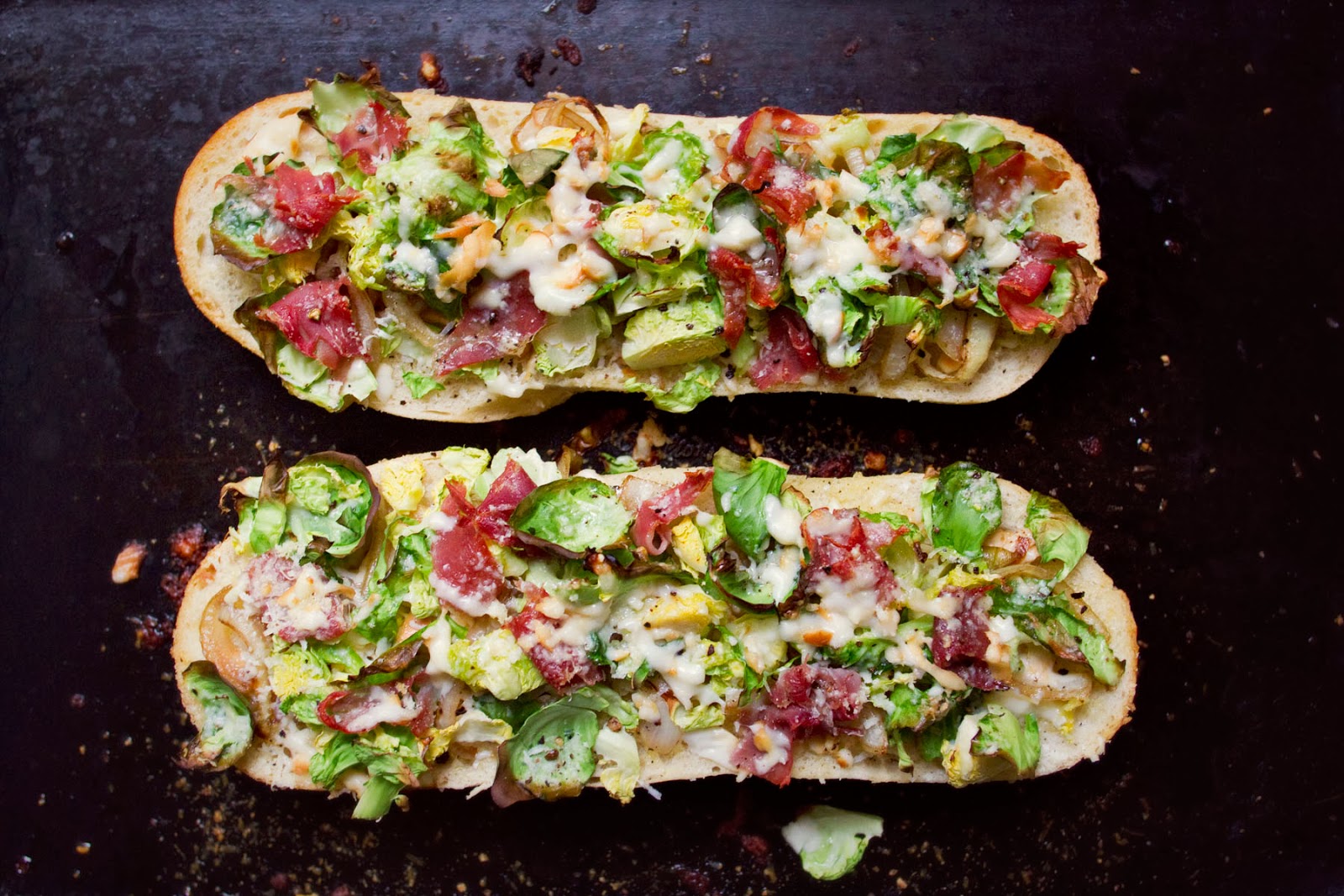 I hadn't eaten a french bread pizza in years, and I forgot how amazing they are. The way the edges get all crisp but once you crunch past that french bread crust and toasty edges the inside is all soft-as-a-cloud bread and steamy air pockets. The melty cheese clinging to the toppings, browning as it clings to the crust of the bread. Yum. Why haven't I made a million versions of this? 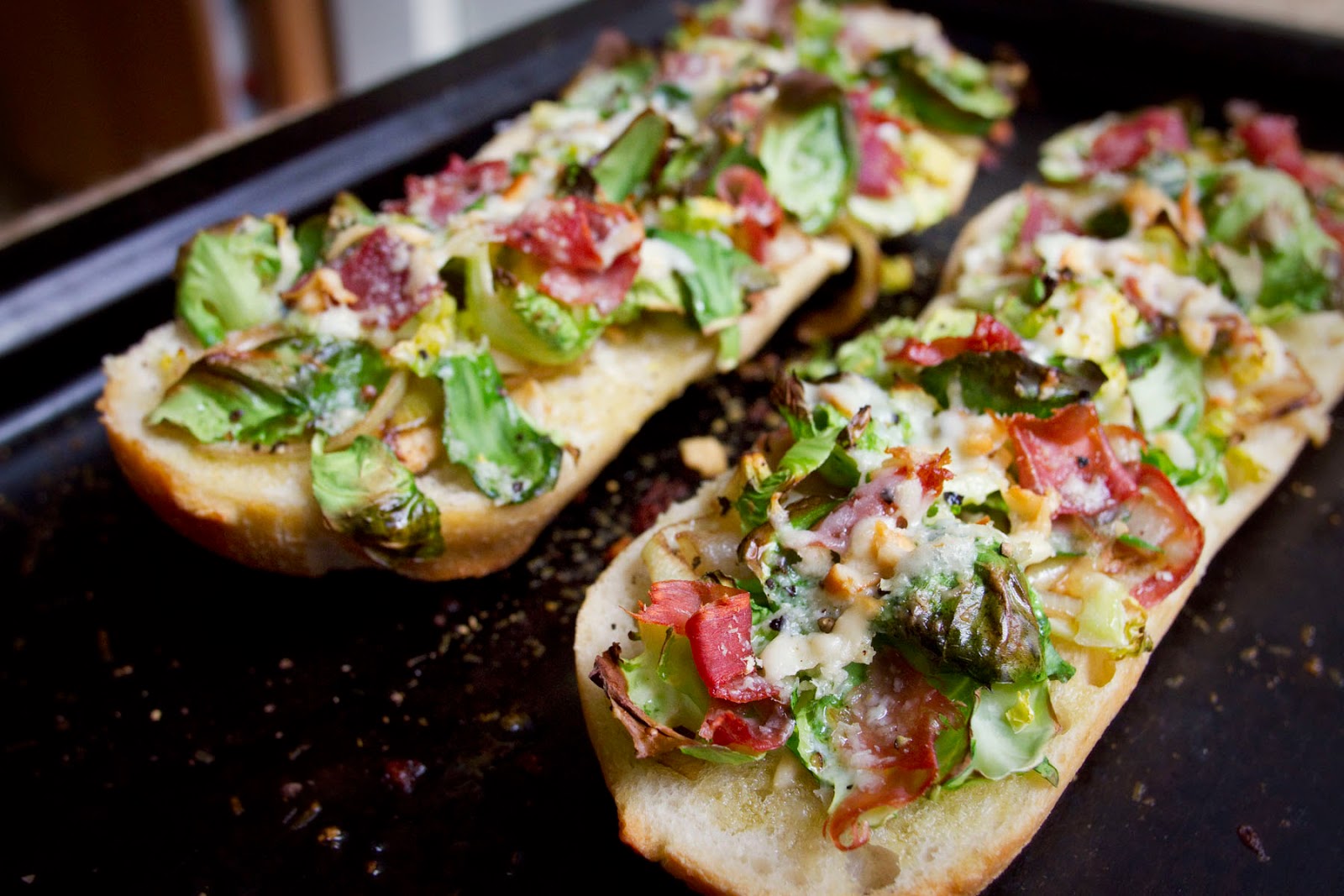 French bread pizza was a delicious, and fairly uncommon treat in my house growing up. We stuck with the traditional, red sauce, mozzarella, maybe some pepperoni. Twelve minutes in the oven and it was a bubbly, cheesy, messy treat. 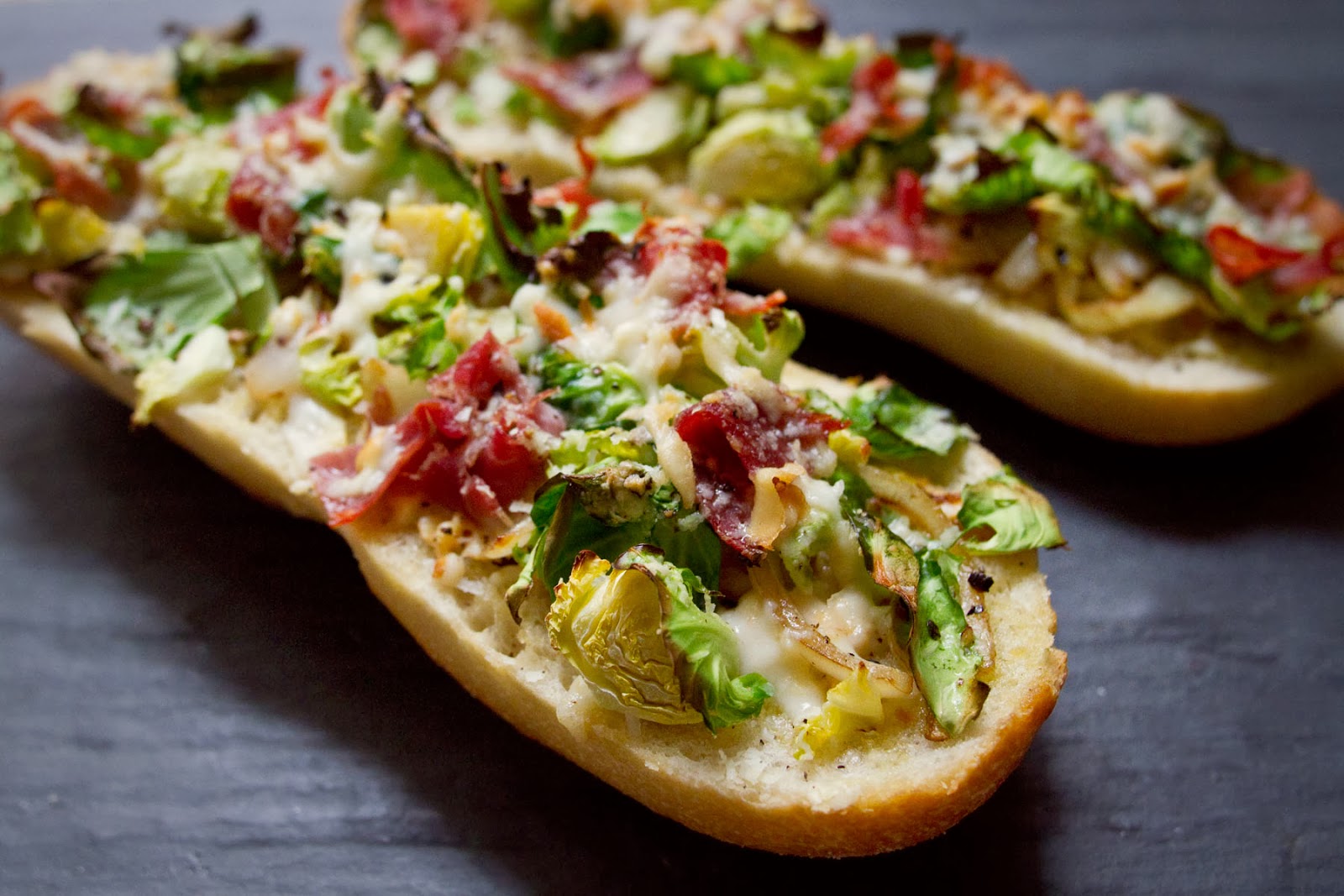 The classic french bread pizza is great, but this is better. I like that it's not too messy to eat, and the bread remains more intact when it's not covered in wet sauce. The brussels and prosciutto make a zippy, savory, really interesting combination, the onions are sweet and soft, and the Romano perfectly rounds it all out. 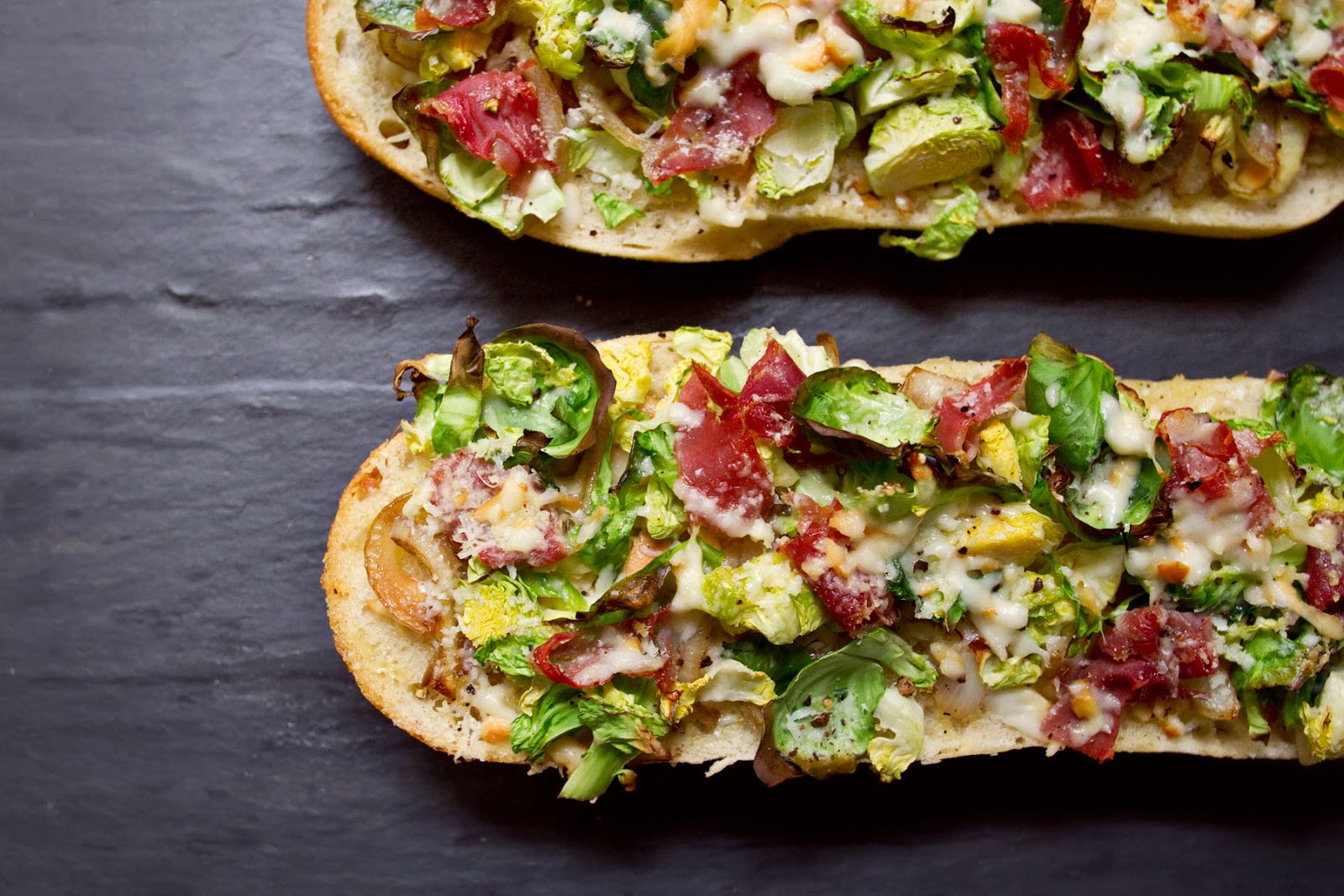 I could eat these at any meal. They make a great stand alone lunch, are a delightful accompaniment to some marinara covered spaghetti, and would be great served alongside a frittata for brunch. They're best fresh and warm, but if you have any leftover you can wrap them up, pop them in the fridge, then when you want to eat it, simply drizzle with a bit of olive oil and reheat in a preheated 425 degree oven for 5-8 minutes. 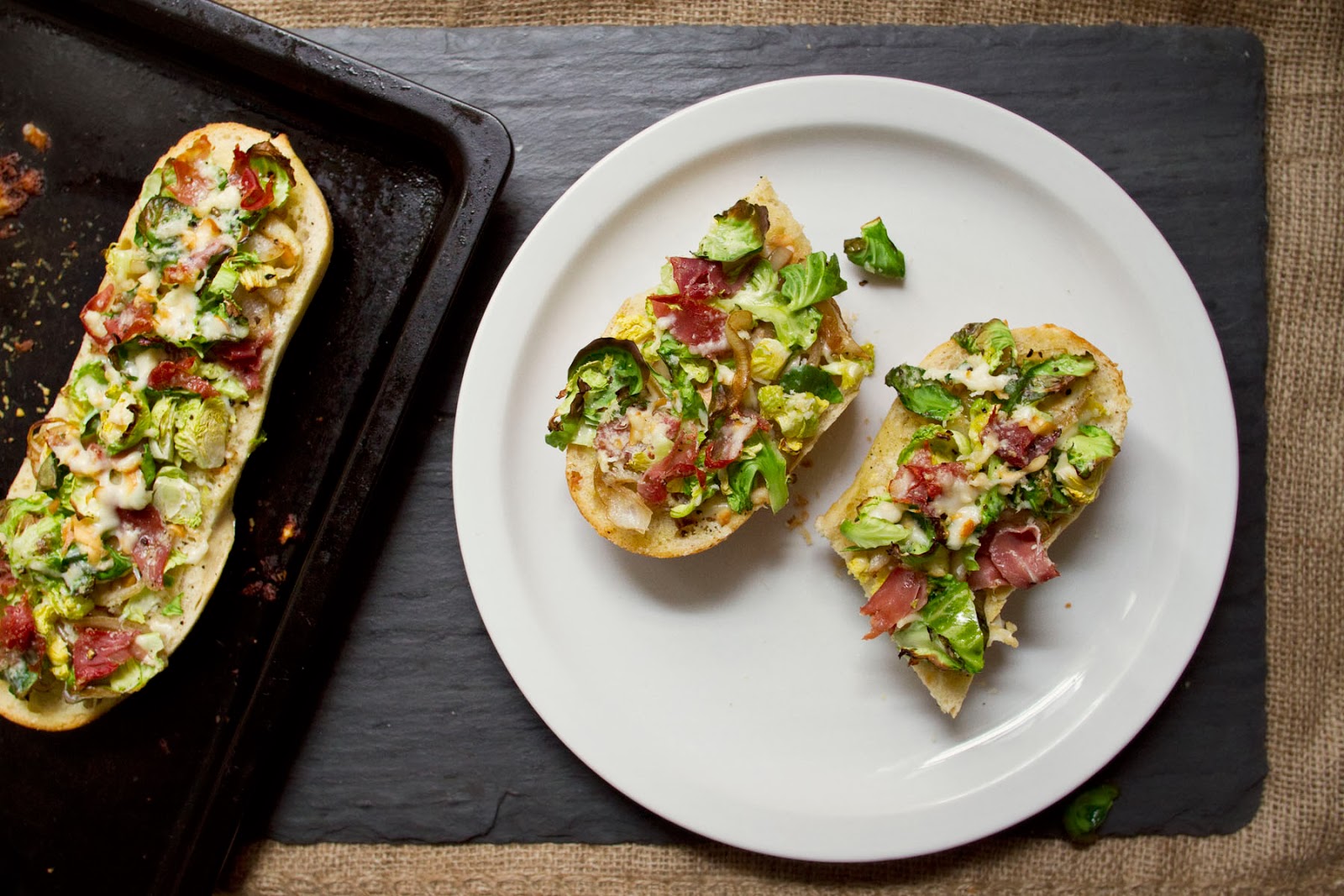 Preheat the over to 425 degrees Fahrenheit.
Start by caramelizing the onion. Cut it in half, then slice thinly. Pour about 1 tbsp olive oil into a small pan and add onions, cook over low heat until the onions are all transparent and beginning to lightly brown, about 10 minutes, then add the balsamic vinegar and stir well, cook another 2-4 minutes, until the onions fully absorb the vinegar and all soft, brown, and beginning to be jelly-like. Remove from heat, and set aside.

Finely chop garlic or press with a garlic press, and add to 3 tablespoons olive oil in a small bowl. Mix, then set aside to infuse.

Cut the ends off your brussels sprouts, and chop them roughly, pull some apart into leaves, chop some large and some small, you want lots of different brussels sizes and textures going on. Set aside chopped brussels.

Cut the prosciutto into bite sized bits and set aside. Grate the mozzarella.
Slice the baguettes lengthwise to produce two pizzas from each baguette. If using a full size baguette, cut baguette down the middle prior to slicing into the two pizzas, to produce 4 pizzas.

Bake for 8-10 minutes, or until cheese is melted and the brussels sprouts are lightly browned on the edges. Remove for oven, cut in half and enjoy warm. Yum! 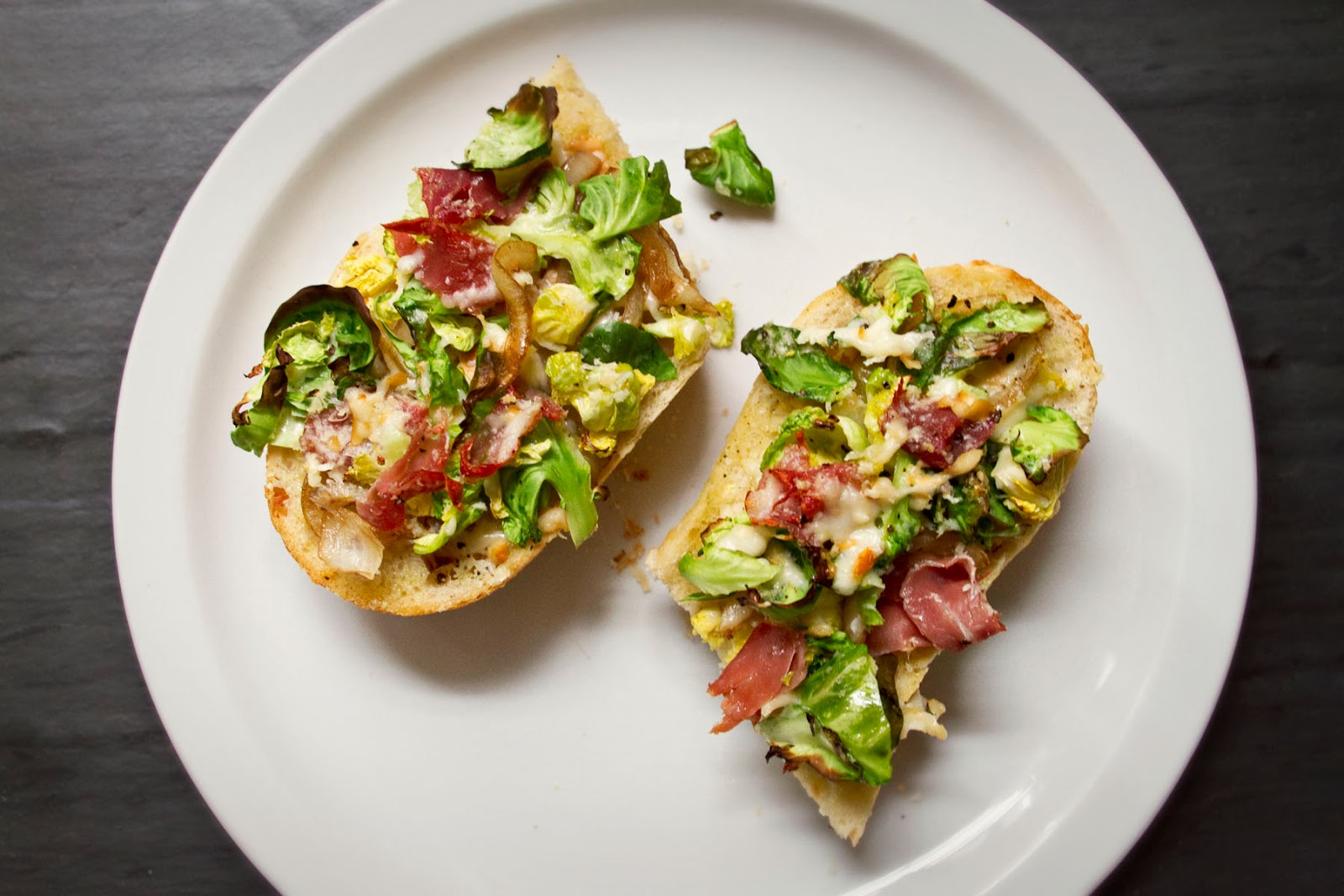 Posted by Little Market Kitchen at 6:23 AM