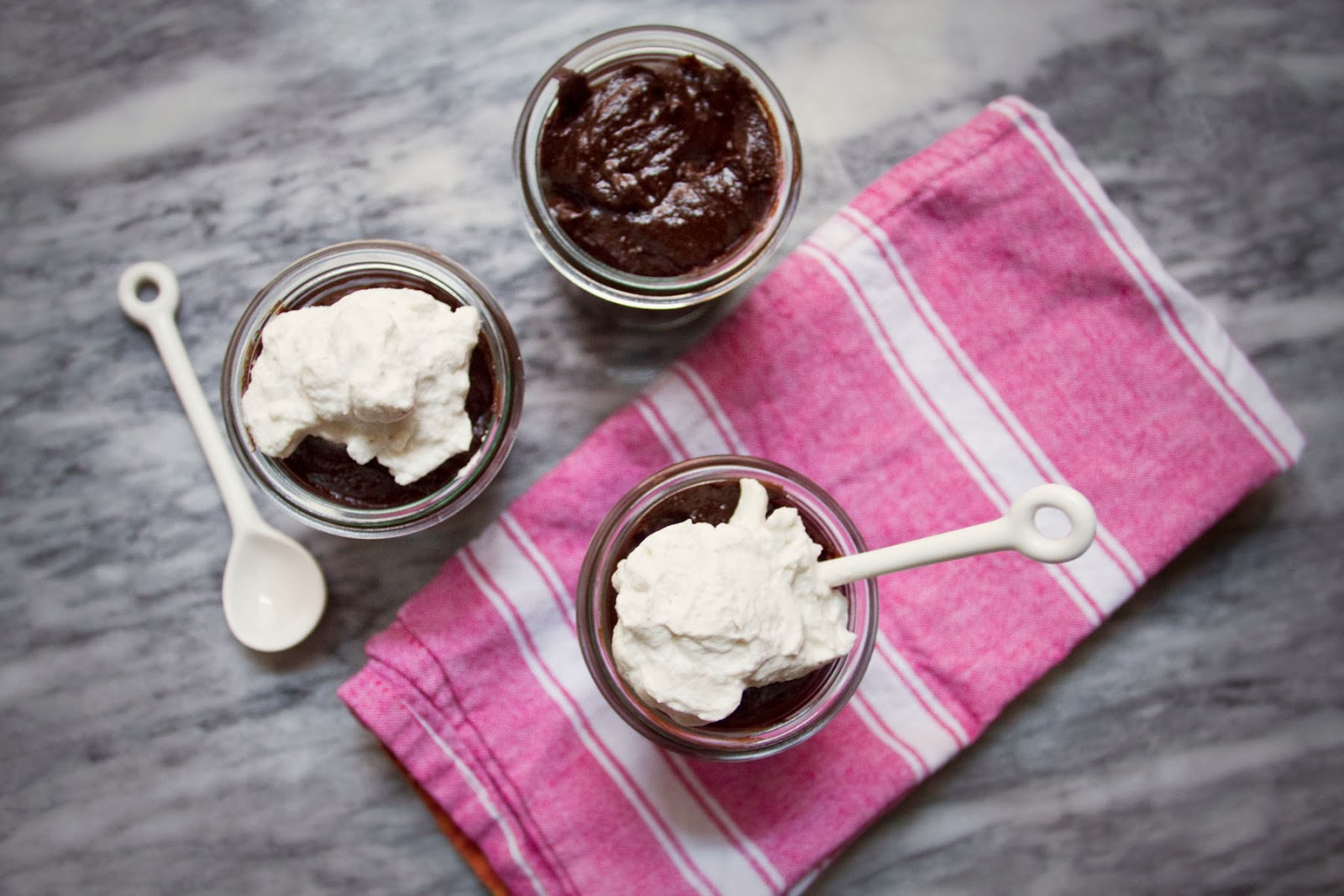 Lavender. It's my favorite color, flower, smell, and flavor. How many other words even encompass all of those different senses in one? I'm not really sure when I fell into my love affair with the dusty-colored plant, probably sometime shortly after my decade long childhood tomboy phase. 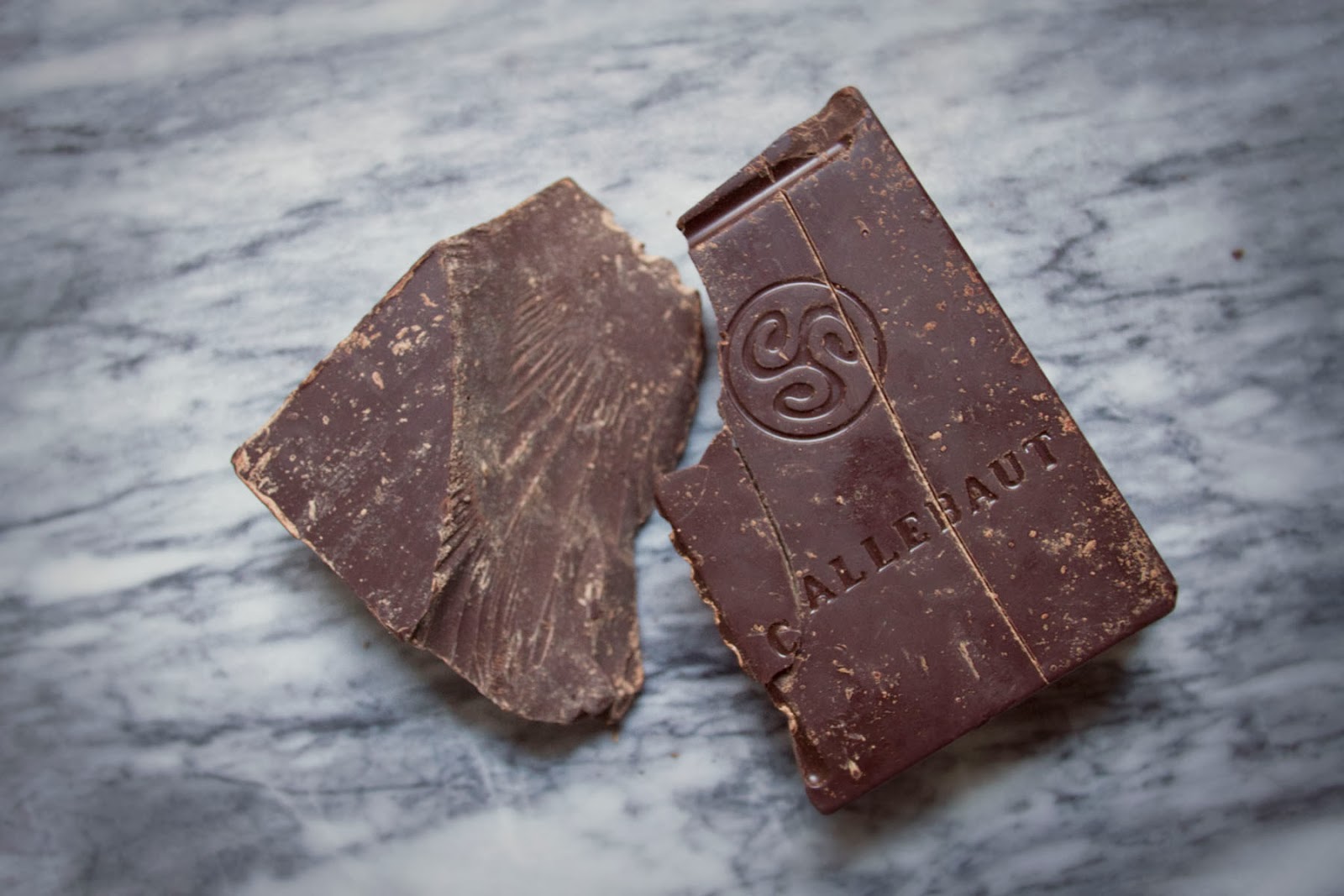 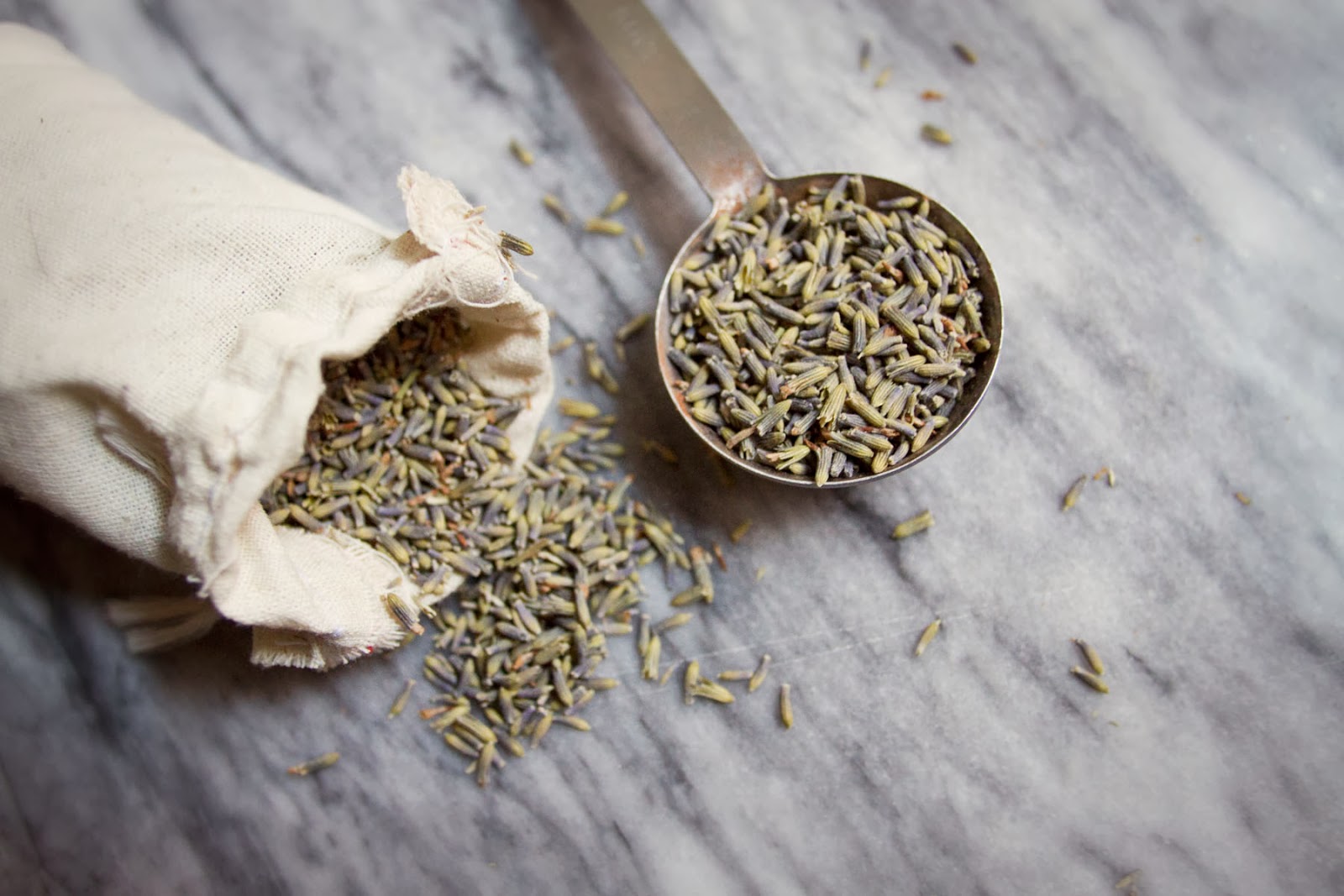 The first lavender desserts I ever made were lavender-lime sugar cookies, and it seemed everyone who tried them either
A) loved them and swore they were the best cookie they'd ever tried.
or
B) Didn't like them, but suspected they would like them without the lavender. 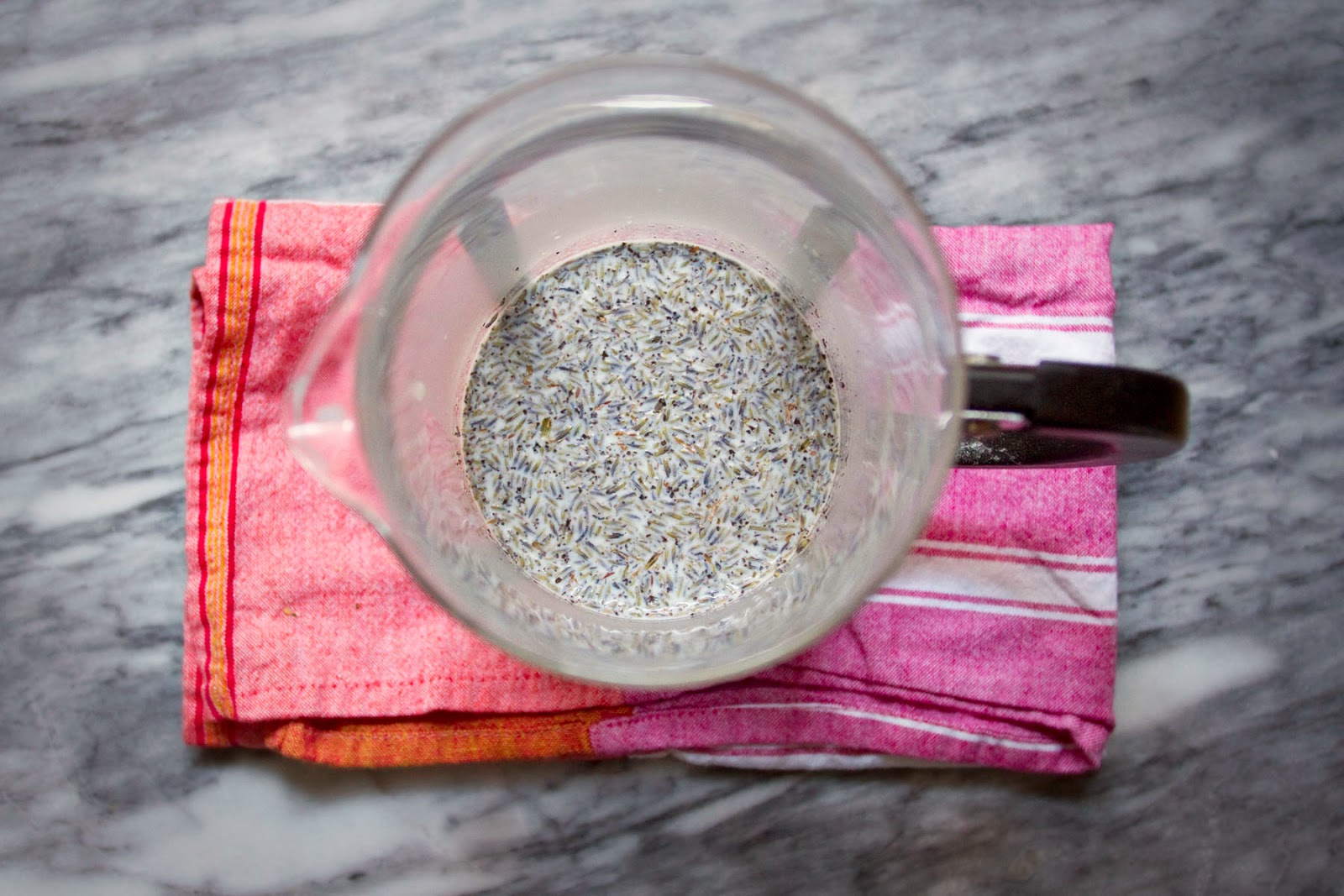 I love the taste of lavender, light and floral and complex, but even I've tried a candy or baked good or two purporting itself to be lavender flavored, only to find it tasted more like soap. However, I can assure you this pudding doesn't have even the lightest note of soap. The Earl Grey tea really helps to balance the light floral notes of the lavender, and the dark chocolate tempers it further. 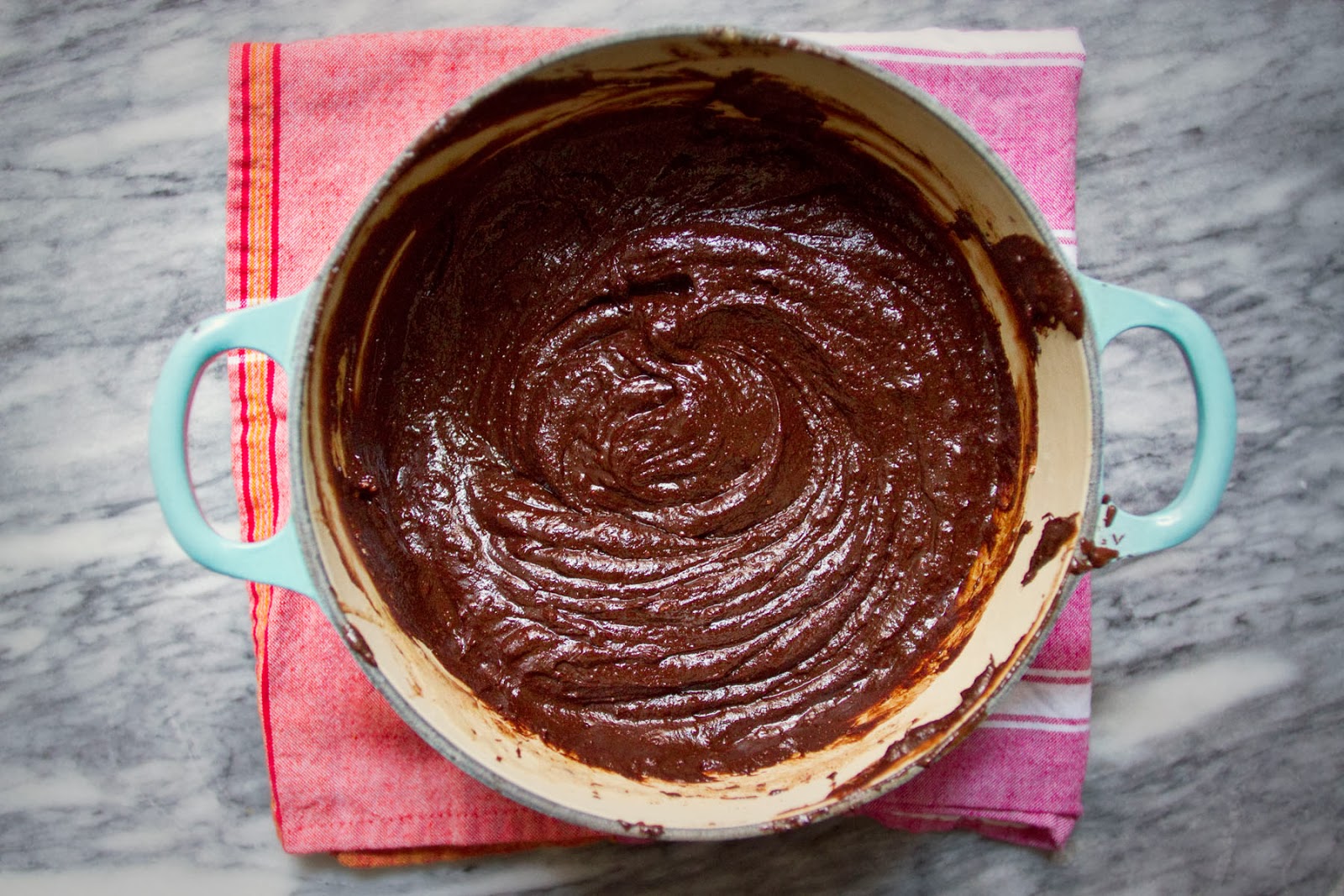 Lady Grey tea is a toned down version of Earl Grey, the bergamot is less strong, and additional flavors are added, like lemon and cornflower. My favorite variations of Lady Grey, however, involve a touch of lavender. The light floral note compliments the dark, earthy tea perfectly. 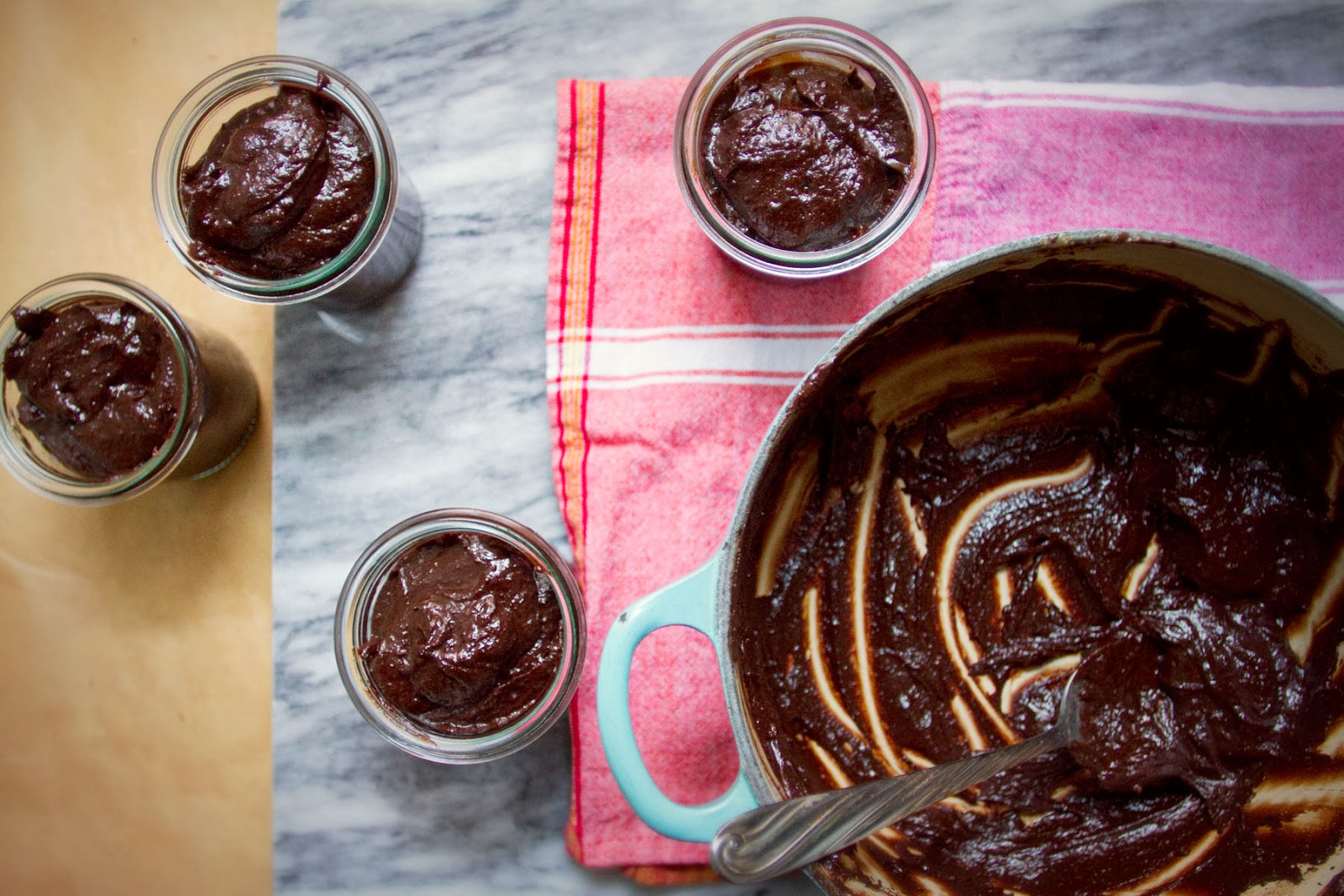 To emulate the taste of Lady Grey tea but keep the strength of the tea flavor, I added lavender to the more potent Earl Grey. The tea and flower combo needed to be strong to keep from being drowned out by the chocolate. 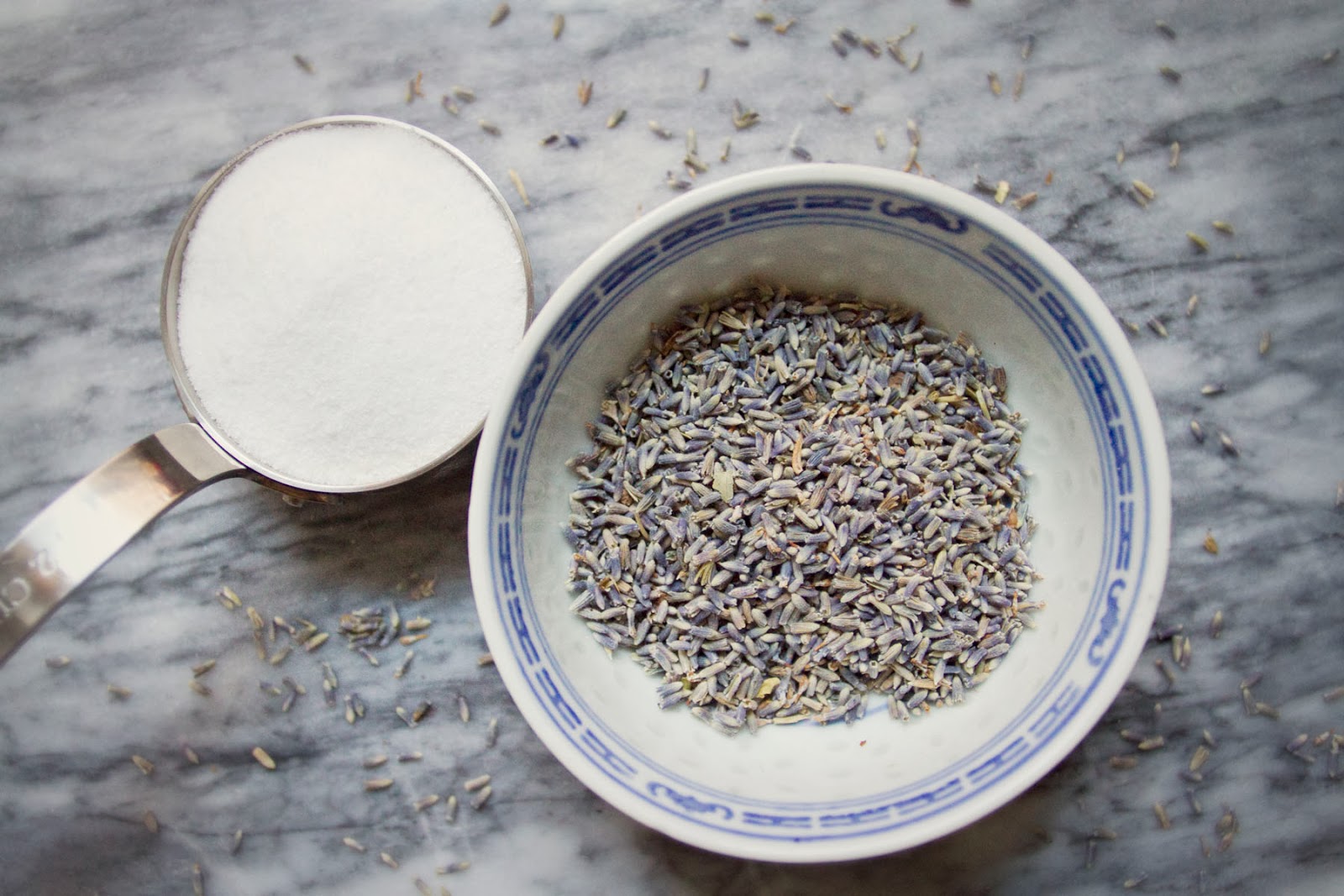 The lavender whipped cream is the powerhouse of lavender flavor in this dessert, the lavender really comes through clean in the heavy cream, and the combo reminds me of the lavender bushes behind my old home in Washington. 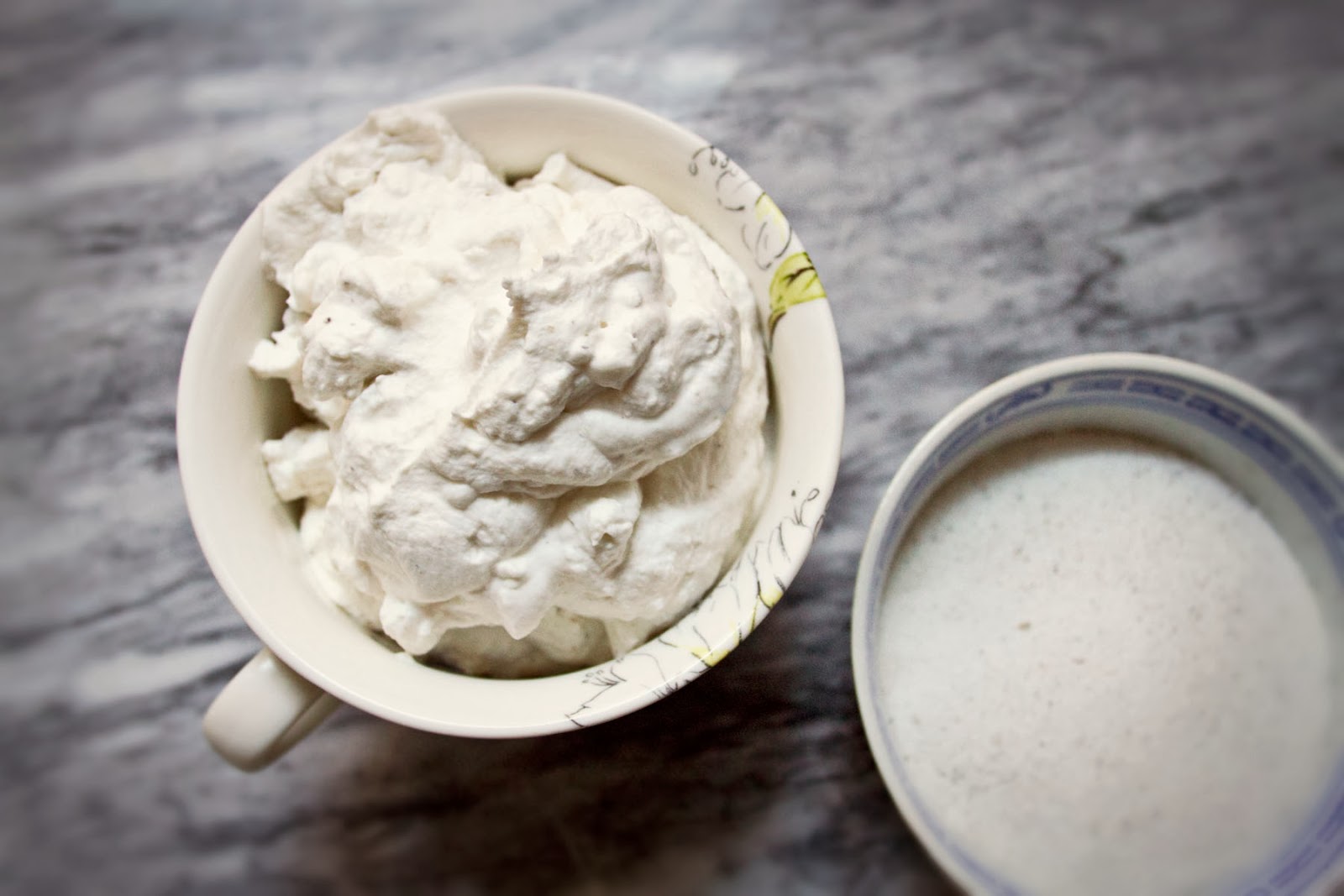 One year there was a blizzard, an uncommon occurrence in Western Washington, and the next morning just the very tops of the garden plants were sticking out from under the snow. Little stalks of lavender poked through the snow, their defiant little purple heads popping out of the perfect whiteness, a jot of color in a white landscape. The whipped cream is like that, a little streak of clean, crisp floral peeking through the light creaminess. 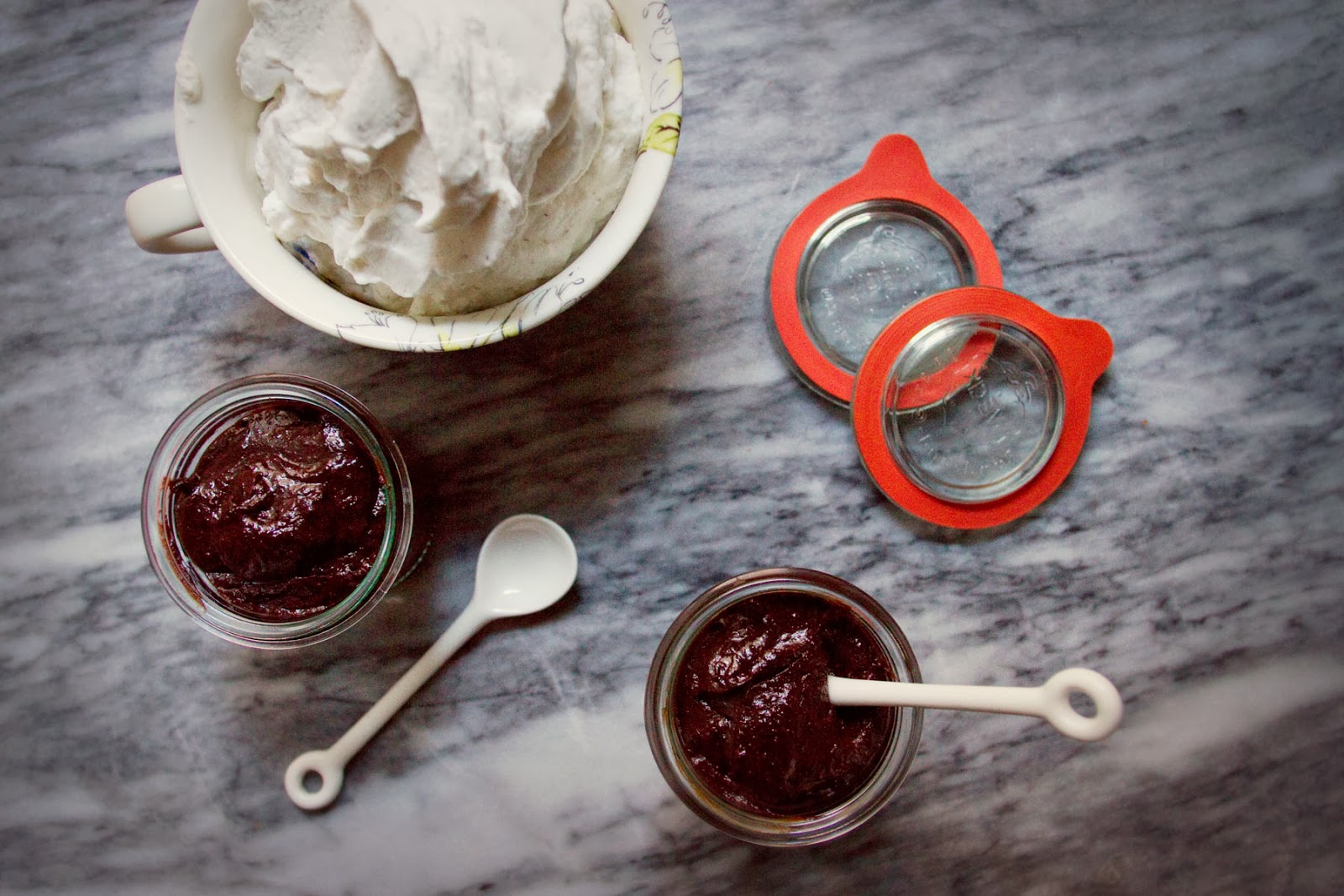 This is one of my favorite custard bases, and I use it in a myriad of desserts, including my Dulce de Leche Dark Chocolate Pie. It thickens up a bit more than most puddings, and if left in the fridge more than a few hours, you end up with a thick, scoopable fudge-y pudding, which I find totally delightful. 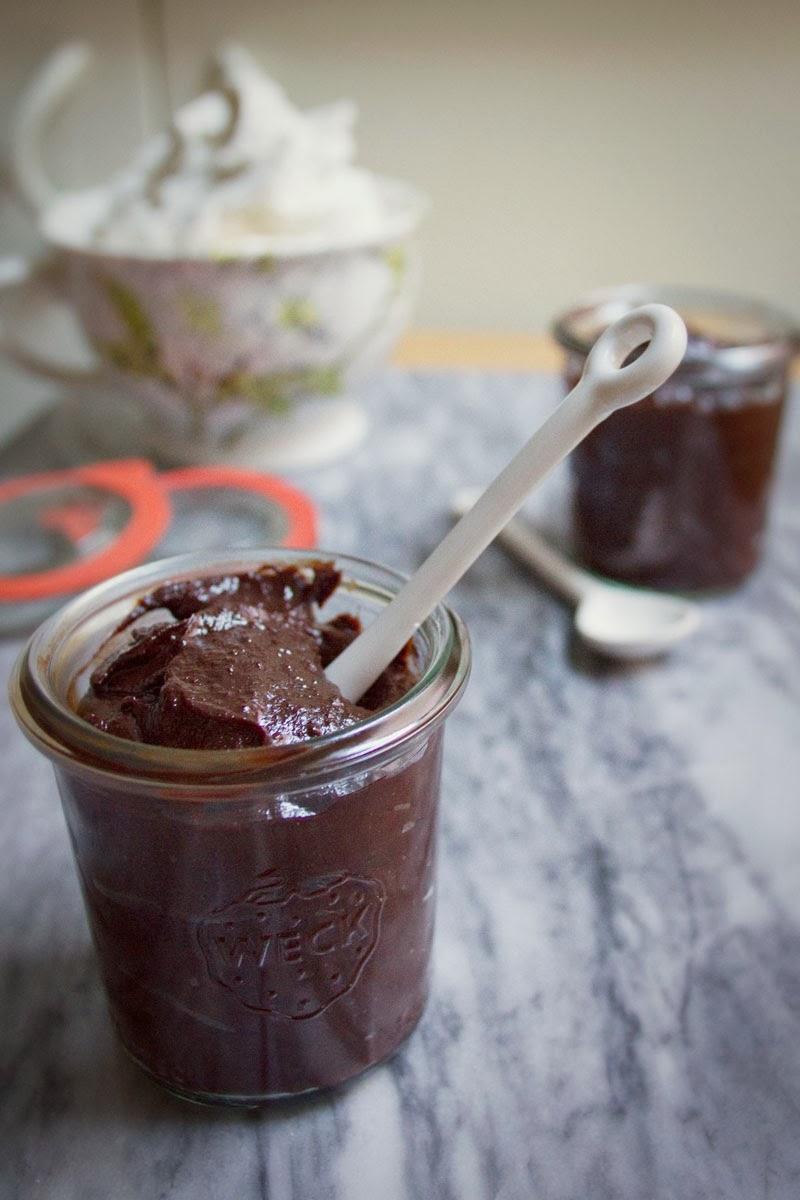 If you're not a dark chocolate fan, I am sure you could use milk chocolate chips or bars as well. The result would probably be ultra-creamy from the milk mixing with the creamy milk chocolate, which might be nice. I'm not a milk chocolate fan myself, so you won't catch me trying it, but I bet it would work nicely. 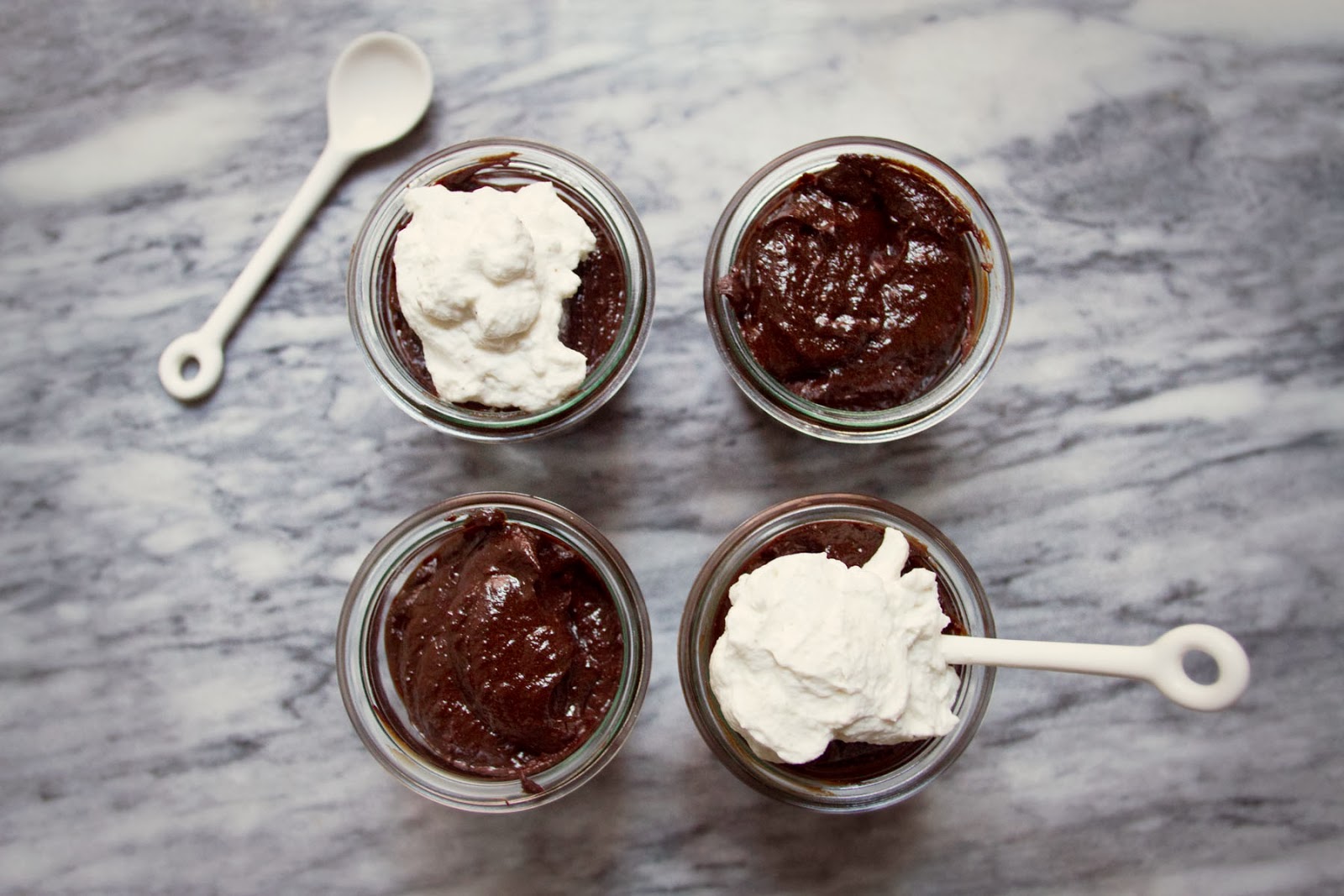 These make an excellent any-day dessert, but could also be great as dessert at a dinner party, or served in smaller bowls on a dessert buffet (they're pretty sturdy and won't get soft if set out for a while). I popped mine in these jars so I could put lids on them and send them to work with S and me, but then we ate them all before I could send one anywhere. They were just too good! 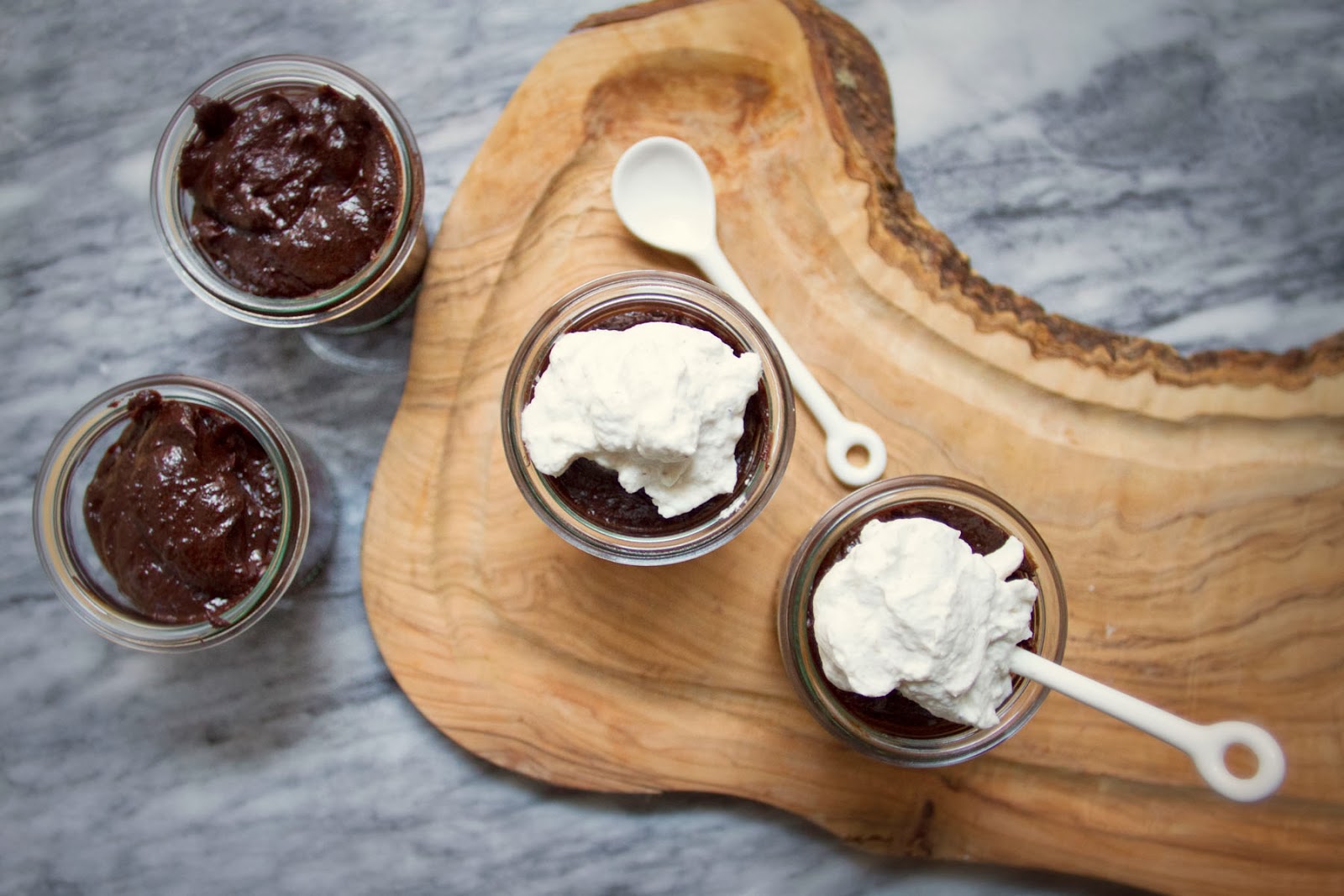 Begin by pouring the milk in a small saucepan and placing over very very low heat, let it warm, stirring occasionally, until it is lightly simmering, be careful to heat it slow and low and stir it to avoid scalding. When the milk begins to simmer, add the tea contents of two Earl Grey teabags and the lavender. As long as you have a fine mesh sieve you can add the contents loose, otherwise consider leaving the tea in bags, and place the lavender in a tea ball. Continue to heat for a moment or two, without allowing the milk to boil, then remove from heat and allow the tea and lavender to infuse for 10-12 minutes.
After the lavender and tea has infused the milk, strain the milk through a fine mesh sieve. I did this with my french press. I let the milk infuse in there, and then I sieved it out through the french press sieve. Return the infused milk to the saucepan

Separate your egg yolks and whites, discard the whites and place the yolks in a small bowl. Beat lightly then set aside.

Return milk saucepan to a slightly higher, but still low heat. Add the sugar to the milk and stir until sugar is entirely dissolved and milk is steaming, about 2 minutes. Remove from heat. Slowly add a small amount of the milk to the egg yolks while rapidly whisking, add a bit more, still whisking, until the egg yolks are slightly thinned. Then, while whisking the milk mixture, slowly and steadily pour the egg yolk mixture into the saucepan. Keep whisking. Return to low heat, and whisk continuously until the mixture thickens a bit, which if your temperature is nice and low for even pudding cooking, will take 4-6 minutes. Don't let it thicken too much, the chocolate will greatly thicken the pudding.

Once slightly thickened, remove the pudding from heat and add the chopped chocolate, whisking until it all melts and a thick, hot pudding is formed. Add the pinch of salt and mix in the butter until fully melted and incorporated.

Dish pudding out into bowls. I was able to make 4 4.5oz jars full, and had a few tablespoons leftover to eat out of the saucepan.
Chill in the fridge for at least 15 minutes, but up to 1-2 hours. You can leave the custard in the fridge longer but it will thicken up some more, and become like a scoopable fudge. Which, frankly, I also love.

While the custard chills, place a 1/2 C sugar and 1 tbsp lavender in a food processor and process until the lavender is chopped up fine and well mixed with the sugar. About 2-3 minutes. Pour lavender sugar into a small bowl.

Add 1 C cream to a medium mixing bowl, or the bowl of a stand mixer, and 3-4 Tbsp of the lavender sugar, depending on how sweet you like your cream. Mix with a hand mixer or stand mixer on medium-high speed, until slightly stiff peaks form and whipped cream has reached desired thickness, about 2-3 minutes on my Kitchenaid.
Serve whipped cream dolloped on top of your ramekins of custard and enjoy. 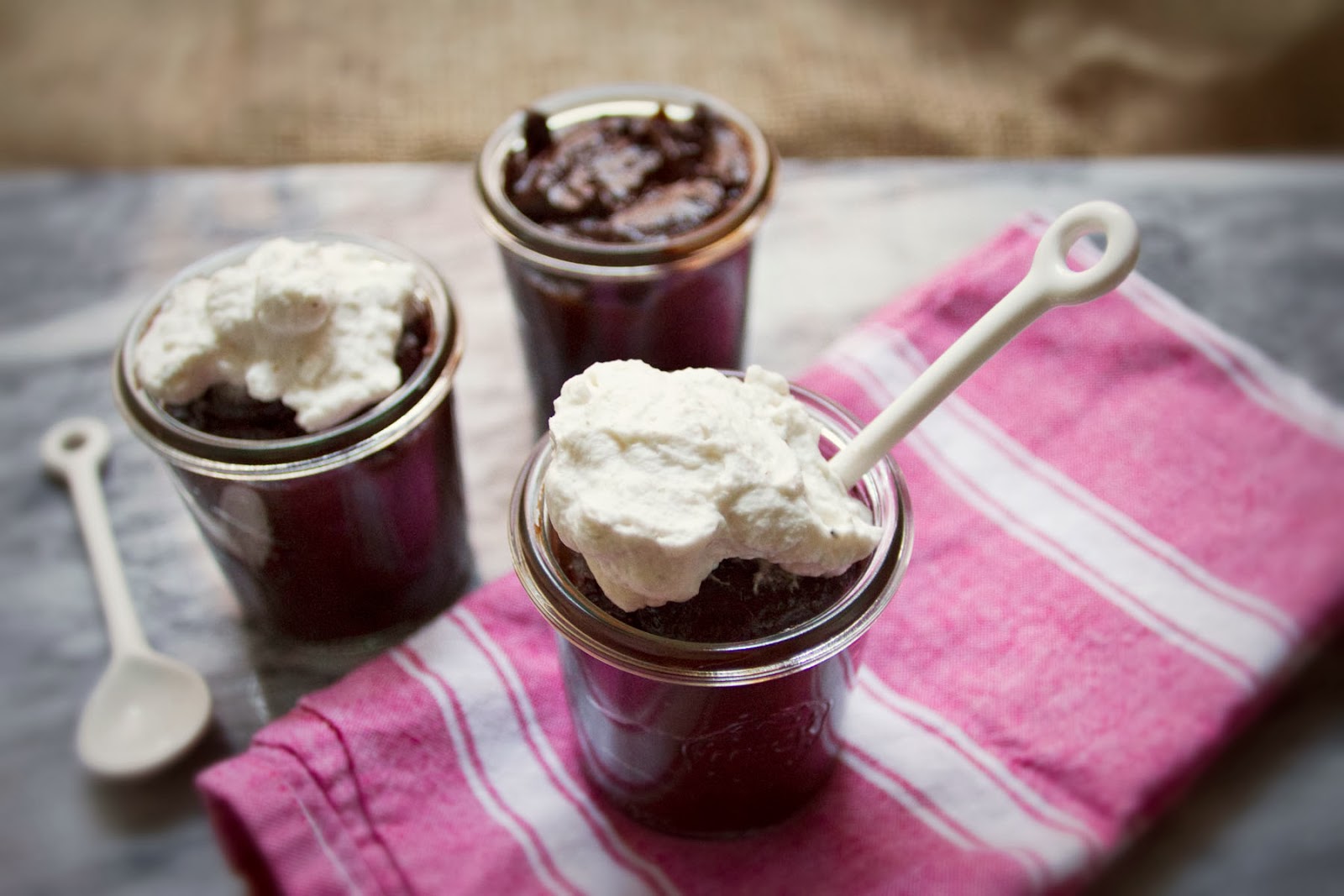 Posted by Little Market Kitchen at 7:04 AM