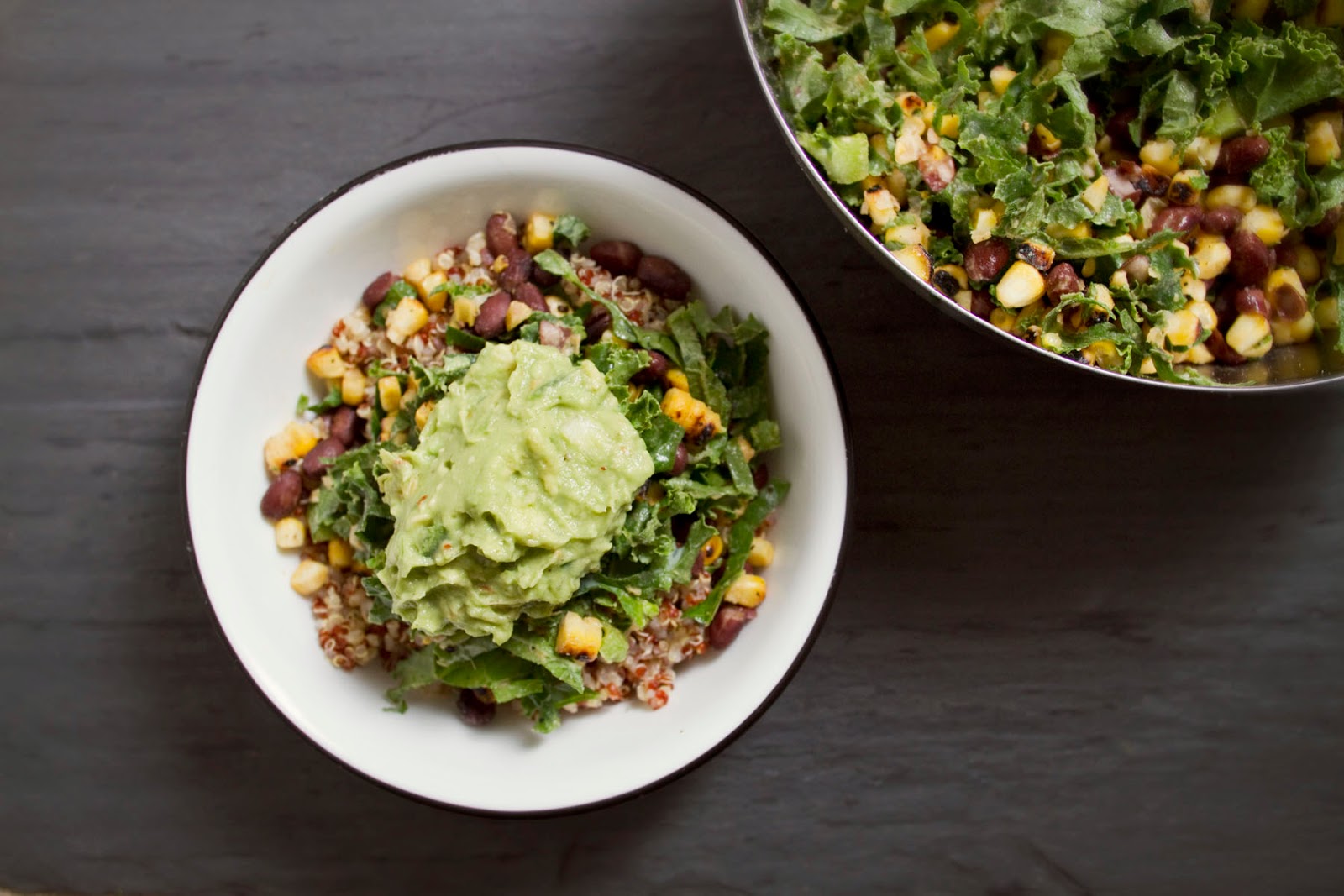 This is a fantastic one-dish meal. Perhaps even the ultimate meal-served-in-one-bowl. It has yellow and green vegetables, antioxidant, anti-inflammatory kale and creamy, good-fat avocado, beans for protein, super-nutritious quinoa (in two colors!), and delicious spicy peppers, garlic, and onions. Plus, it has a lot of lime juice, so you won't be getting scurvy any time soon! 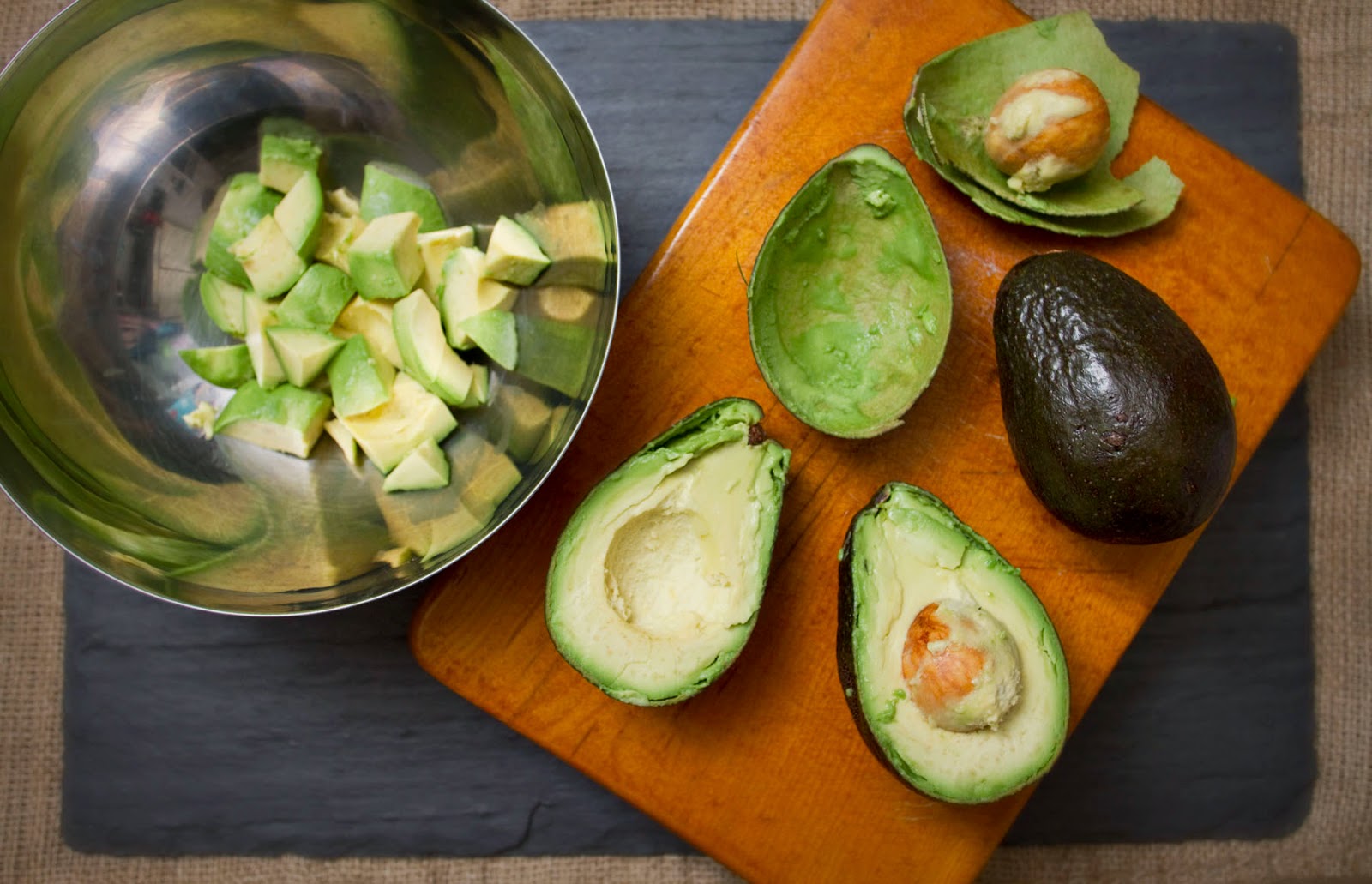 I made this late last week, and after S and I took a train to Long Island to pick up the car and drove it back into the snowy city on Friday night, my first time back to driving in the city since before Christmas, I was happy to hurry back home to a big bowl of spicy guacamole and delicious corn, kale, and bean salad. 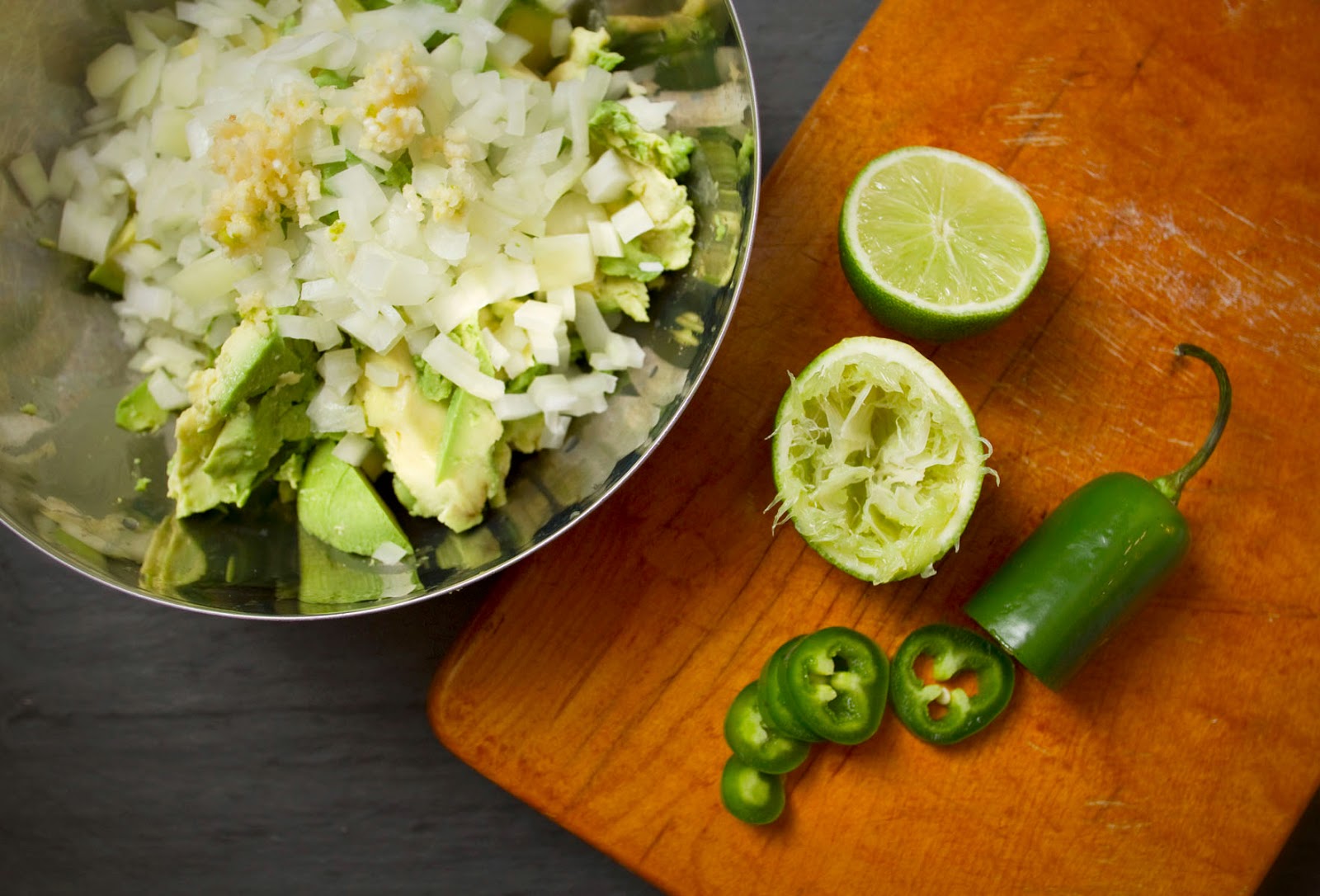 S and I picked up the car so we could drive out to PA for some skiing on Saturday. This is my fourth winter teaching S to ski, and by teaching S to ski, I mean making him chase me down ski hills all over New England, which is certainly not his favorite activity. 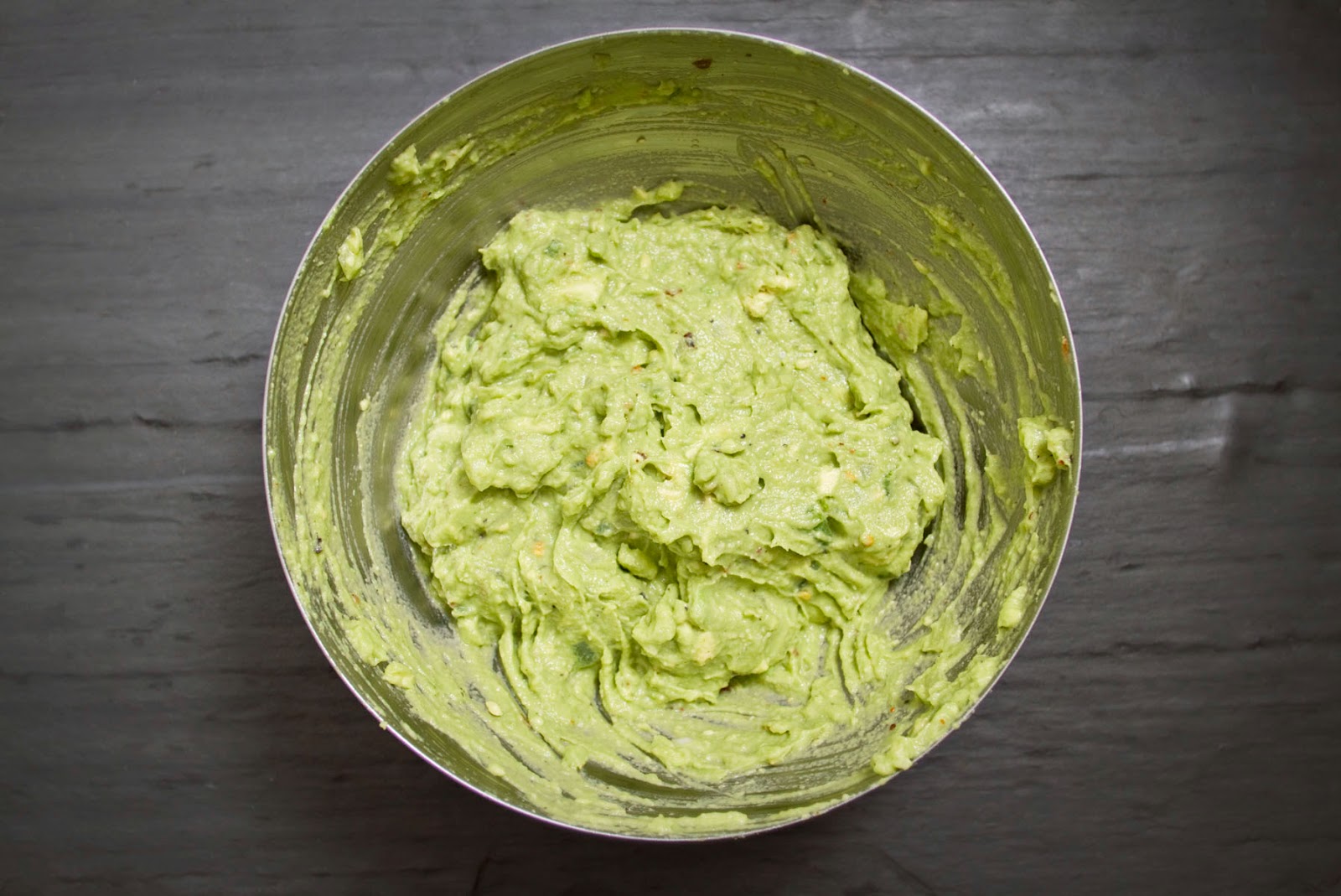 Which is why I made sure S ate a big bowl of this delicious, nutrient filled dinner the night before we skied. And then I brought muffins for the car, clementines and granola bars for the hill, and cheese and crackers and aged sausage for lunch. No soggy, cardboard-tasting ski resort hamburgers for us. 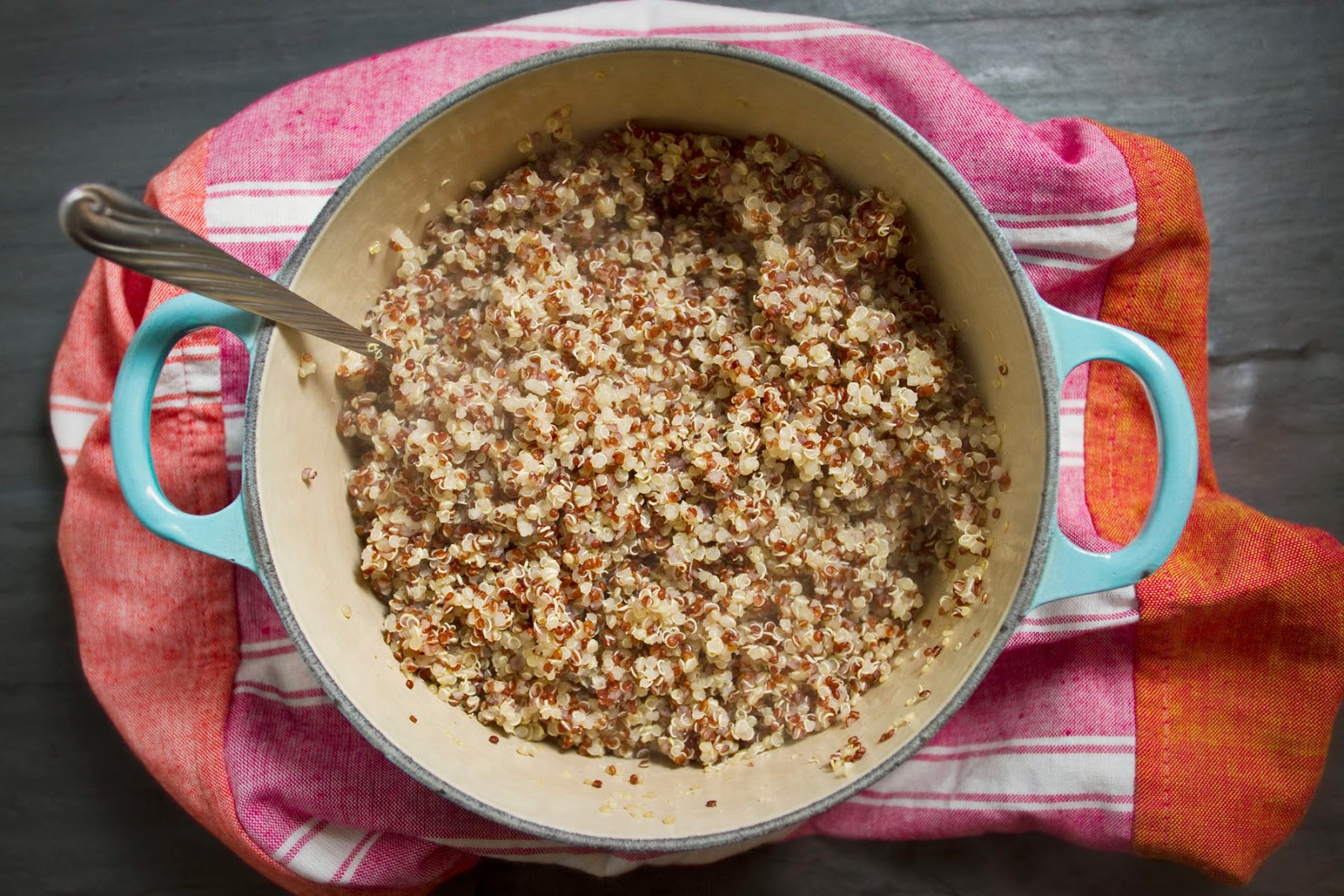 I want to say it was all the monounsaturated fat in the avocado, or the protein-rich beans and quinoa giving him an extra boost of energy and a great equilibrium, but S did not fall once skiing on Saturday. Ok, maybe he fell walking down a hill in his ski boots, but it's my experience that the better you are at skiing the more likely it is that your one fall of the day will be while walking, or while goofing around in the lift line. I am a notorious lift-line faller. 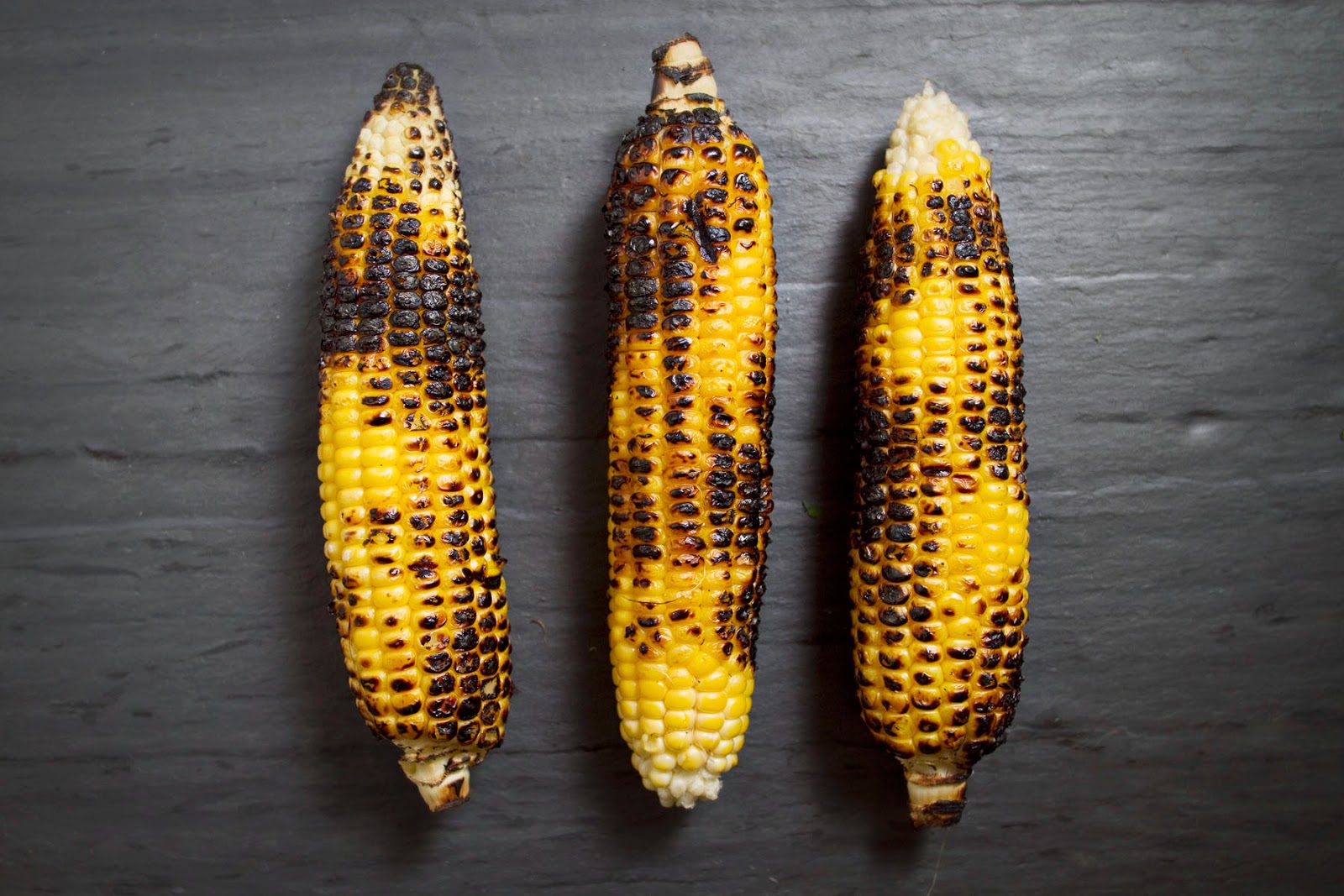 When we returned home from skiing I was truthfully bummed that we had already eaten all of this as it would have made a fantastic post-skiing meal as well! We settled for delivery Chinese, which is never a disappointment down here in Chinatown. 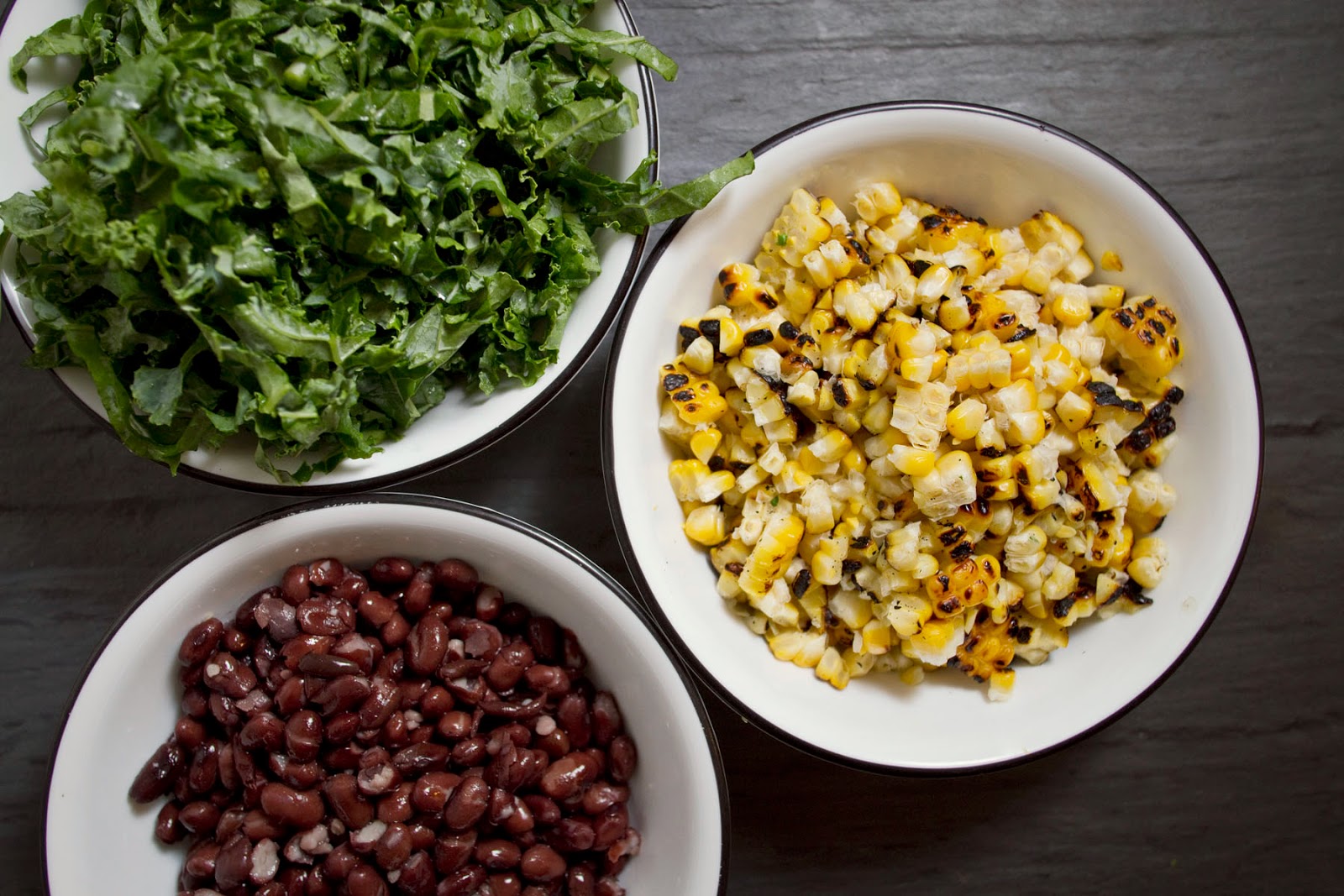 I would describe this dish as being most akin to a burrito bowl, but better. To be totally honest with you, I've never actually had a burrito bowl from Chipotle or Qdoba or one of those tex-mex fast food places, but S has and he confirmed that indeed, this is a more flavorful version of the burrito bowl. The kale packs a lot more punch than your typical cilantro, and the quinoa is like a more flavorful, colorful, textured, and all around better version of rice. 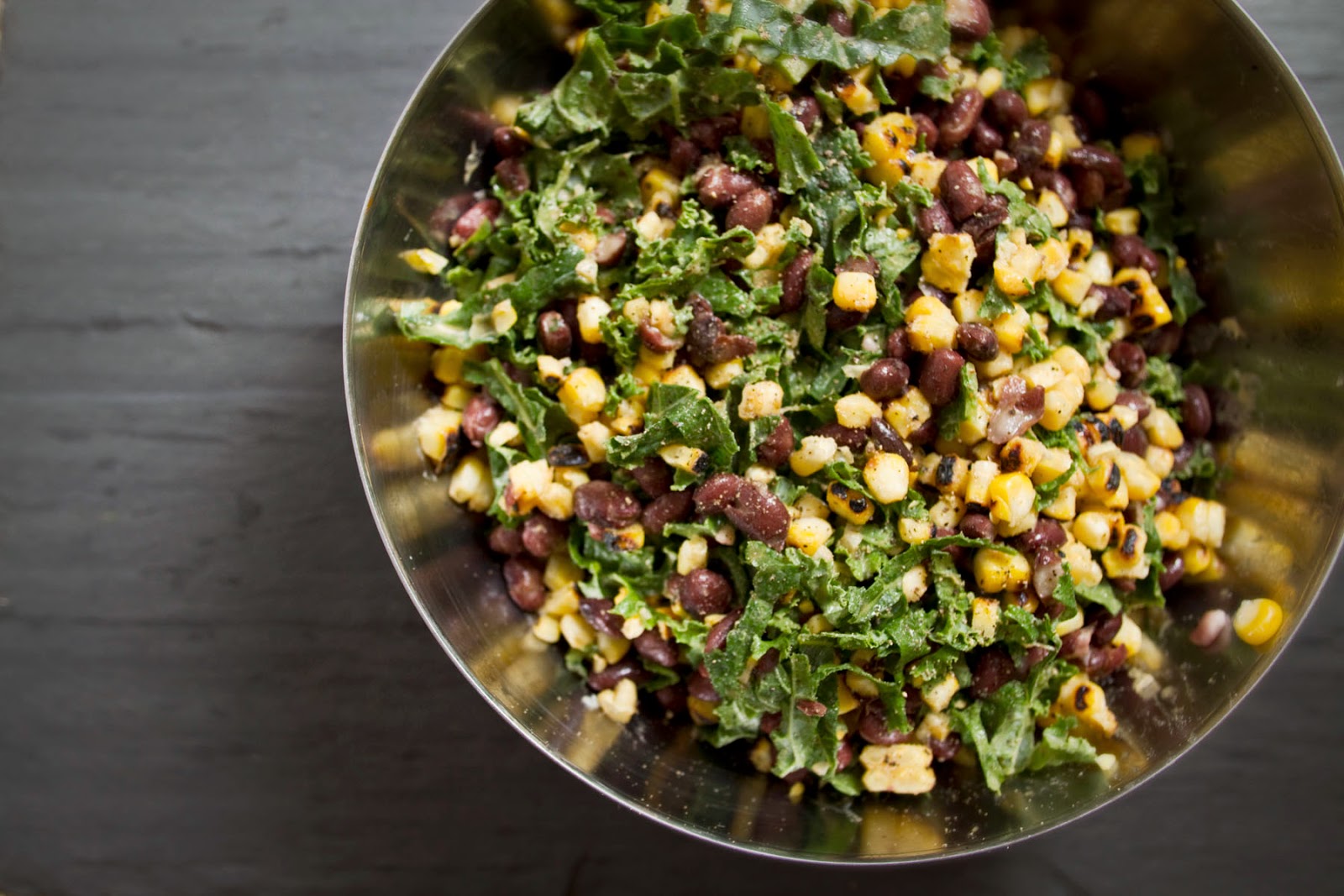 You could mix this up as you like, subbing in dandelion greens or arugula for the kale, white beans for black, less pepper, more pepper, or different peppers in the guacamole. If you're into salsa on your quinoa (not for me), add a scoop of salsa next to your guacamole. This makes a fantastic dinner, or a delicious and hearty lunch, and is great room temperature or chilled! 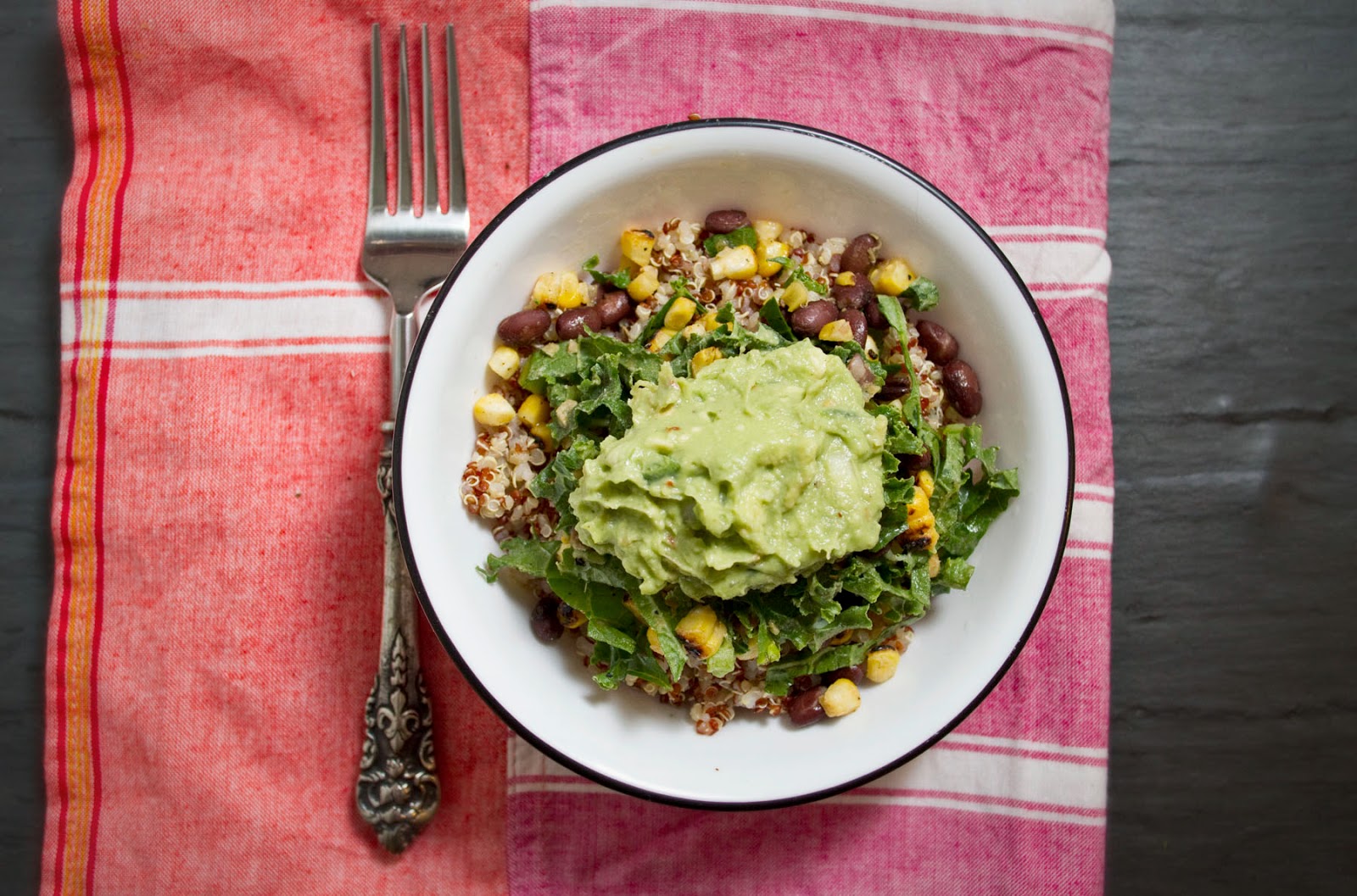 For the guacamole, cut the avocados in half, remove pits, peel, and cut into quarters, place in a medium sized bowl. Finely chop 1/2 a red or yellow onion, add to bowl with avocado. Chop the jalapeno fine as well and add to the avocado bowl, if you prefer a less spicy guacamole, use just 1/2 the jalapeno. We used a whole medium sized jalapeno and the guacamole was pretty spicy.
Juice the lime using a citrus juicer, or cut it in half and poke it with a fork while squeezing it, add the juice to the bowl. Add salt, pepper, and crushed red pepper to taste, then mash everything with a large fork until the guacamole is pretty smooth, around 3-5 minutes. Set bowl aside.

For the quinoa, place two cups of water or vegetable broth in a medium sized sauce pan and bring to a boil, while the water heats place the quinoa in a fine mesh strainer and rinse it under running water. When the water boils, add the quinoa and reduce heat to low, cover the quinoa and allow it to cook for about 12-15 minutes, or until water is absorbed and the quinoa has puffed and sprouted. Fluff with a fork, cut a lime in half, juice it, and add the juice of both halves to the quinoa, mix well.

While the quinoa cooks, if you have a gas stove you can roast the corn on your range, by turning your burner to medium low and placing the shucked corn ears directly on the range so the flames barely lick the kernels. Turn every few minutes as the area exposed to flame blackens.
If you don't have a gas range, you can oven roast the corn following this recipe.
Set corn aside to cool.

Open the can of black beans and pour into a strainer, rinse well under running water. Set aside in strainer to drain.
Wash and dry kale, then stack several leaves together then roll them tightly into long kale cigars. Next, using a sharp knife cut across, starting at the top, to produce thin kale strands. See here for more info. Set kale aside.

Once corn is cool, stand it up on its wider end and using a sharp knife, cut straight down flush to the cob to remove the corn kernels. Collect the corn kernels and place them, the black beans, and the kale into a medium sized bowl.  Toss to combine.

Cut up two limes and squeeze the juice of 1 1/2 of them into a small bowl, add the dijon mustard, agave, and coconut vinegar (or other vinegar), add a hearty grating of black pepper and a pinch of salt (I use sea salt),  then whisk to combine. Or use an immersion blender, I love my immersion blender for making smooth salad dressing. Keep whisking (or blending!), and slowly drizzle in the coconut oil. Whisk continuously while adding the coconut oil in a very thin stream, the idea is to emulsify it into the dressing so it will not separate. The immersion blender is great for this, but whisking fiercely and pouring the coconut oil really really slow works well too.

Add the salad dressing to the corn-black bean-kale mixture and toss well to combine.

Add a scoop of quinoa to each bowl, top with a hefty helping of the kale, corn, black bean salad, and finish with a big scoop of guacamole. Enjoy!

*Coconut Vinegar is a Southeast Asian product that I love, it's clear and tangy and a bit sweet, but it's not especially common in the US. A white wine vinegar or even rice wine vinegar, perhaps a scant tablespoon, would work as a replacement. 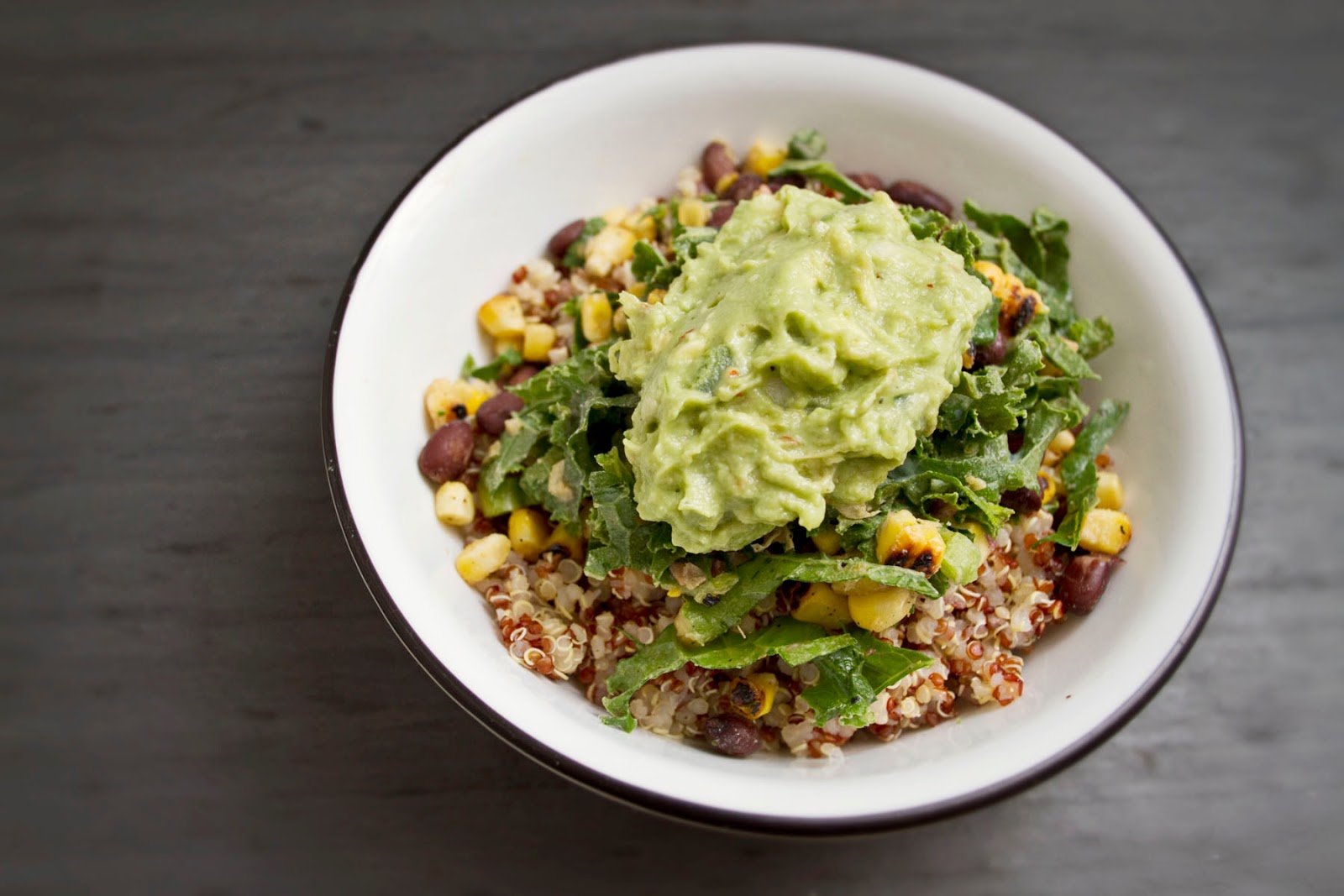 Posted by Little Market Kitchen at 6:45 AM