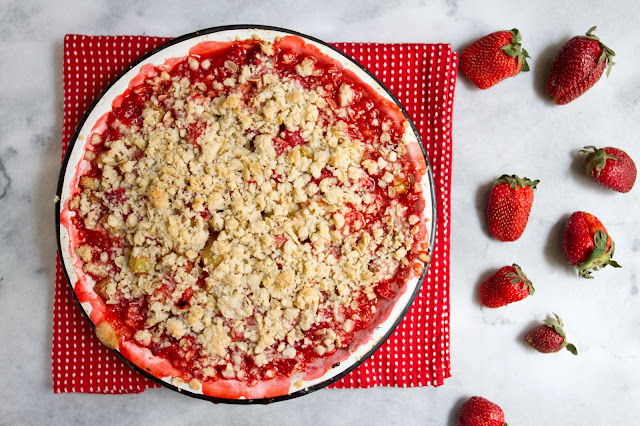 Growing up, some of my very favorite books were Laura Ingalls Wilder's Little House novels. I was fascinated by the rugged way the Ingalls family lived- how they frequently lived a whole day away from the nearest town, how they could go weeks in winter without seeing even their own neighbors. And I was amazed by the ingenuity- the door PA built without any nails, the inflated pigs bladder the girls used as a ball, the way Ma could make one girls ripped dress into a baby dress, then when that tore, she made it into curtain trimmings. 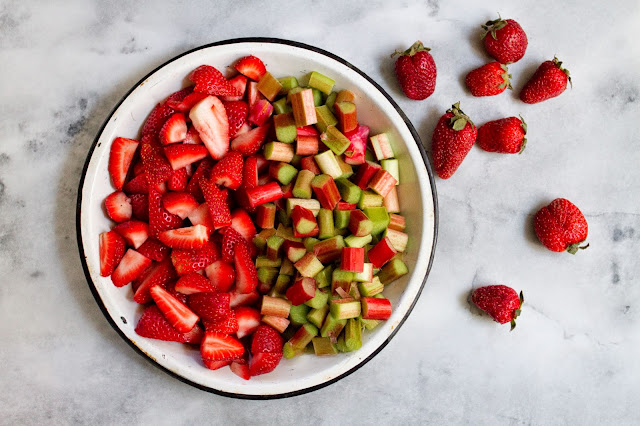 One of my all-time favorite scenes happens in the The First Four Years- shortly after Almanzo and Laura are married some threshers come to work on the farm, and Laura serves them all lunch every day. On the very first day, the first time she's ever entertained guests as Manly's wife- she forgets to put any sugar in her pie, and doesn't realize until it's far too late. 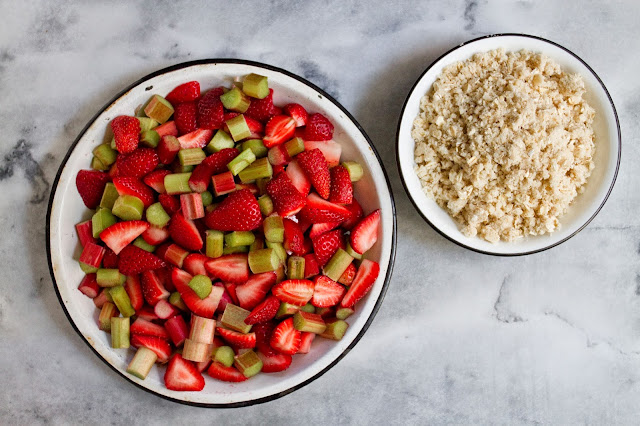 When the first thresher takes a bite of his pie, he grimaces, then opens it up and spoons sugar all over it, while politely telling Laura he appreciates it when a cook lets a fellow sweeten his own pie. She is, of course, mortified. The pie is super sour, because this was not an unsweetened apple or berry pie, no, it was a "pie-plant" pie. Laura mentions pie-plant a few times in the course of the books, but it wasn't until she described the unsweetened pie-plant pie as horribly sour, that I realized I knew of only one super-astringent-sour plant that is used mainly in pies: rhubarb. 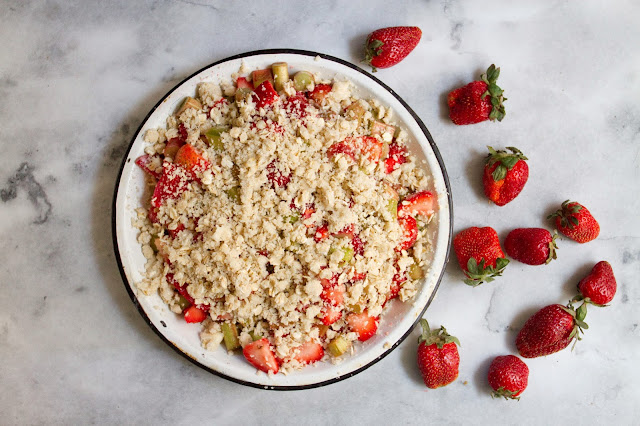 Rhubarb, unsweetened, is more than just tart, or sour, it's outright astringent. It doesn't take a ton of sugar to take the edge off that sourness, but you definitely have to add sugar. I can't even imagine the unpleasant surprise that thresher must've gotten when he pit into his pie! 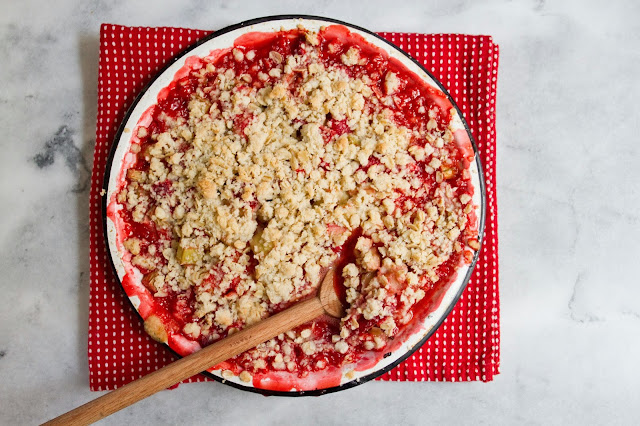 I've never had an all-rhubarb pie like Laura makes (sweetened or otherwise), my mother always made strawberry rhubarb pies when I was a kid. My mother is an excellent pie baker. She can make a buttery, flaky, sweet crust like, well, like only someone who was born before pre-made pie crusts were available can. Her strawberry rhubarb pies are the stuff of my childhood food nostalgia. However, on nights when dessert needed to happen quickly, when there wasn't time to make, and chill, and roll out pie dough, my mother made crisps. 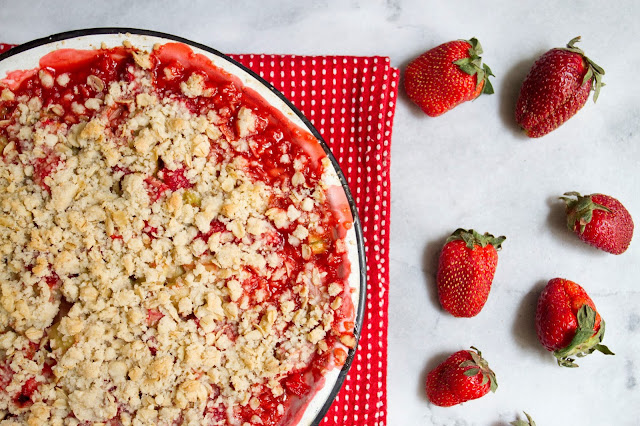 Her most common crisp was apple, but we also made berry crisps, and peach cobblers from time to time. Crisps, cobblers, and brown-betties all come together so quickly and easily, the deliciousness greatly outweighs the effort required to make them, which is why they've become a serious staple of my own dessert making. 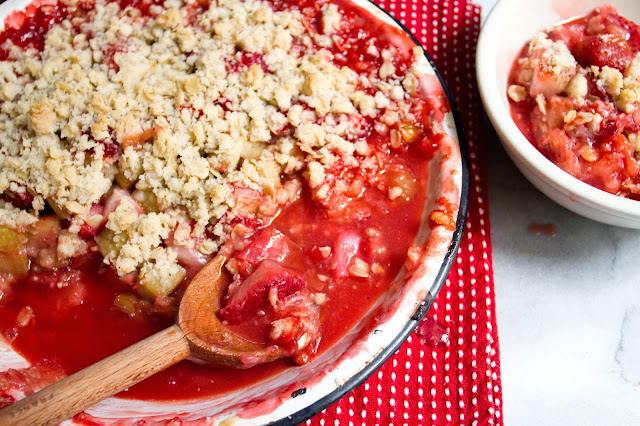 I whipped up this crisp one weekend when we some friends were dropping by, and it was gobbled up practically before I could taste it myself. It is delicious, the strawberries are sweet and soft, mellowing out the rhubarb, but allowing it to keep a slight, lovely, tartness. The crisp is lovely served on it's own, or with a scoop of vanilla ice cream. 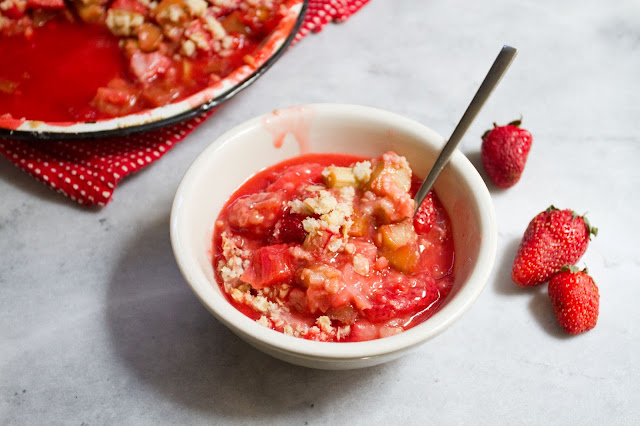 Preheat oven to 350F and grease a large pie pan or a 9x9" square pan.
Chop the rhubarb into half-inch segments and place in a large bowl, remove the tops of the strawberries and quarter them, then add to the bowl. Sprinkle 1/2 C sugar over the rhubarb and strawberries, and gently mix. Set aside.

Combine the juice of 1/2 a lemon and the cornstarch and mix until smooth, pour over the berries and rhubarb, and mix gently until all fruit is coated in cornstarch mixture. Pour into the prepared pan, and spread out evenly. Set aside.

In a small mixing bowl combine the oats, flour, cardamom, pinch of salt, and 2/3 C sugar, and stir until well mixed. Add the butter, and using a pastry cutter, large fork, or your hands, work the ingredients together until they are well combined and the mixture forms many little clumps.

Sprinkle the oat topping over the pan of strawberries and rhubarb, until well covered, then bake for 40-45 minutes, until topping is golden brown and fruit is bubbly. Allow to cool 10-15 minutes, and serve warm. Enjoy! 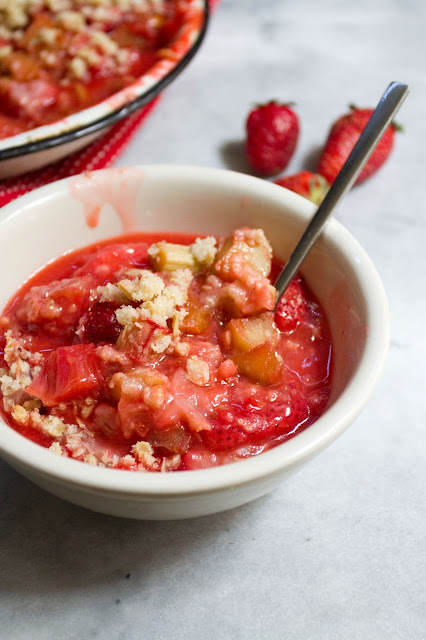 Posted by Little Market Kitchen at 8:49 AM