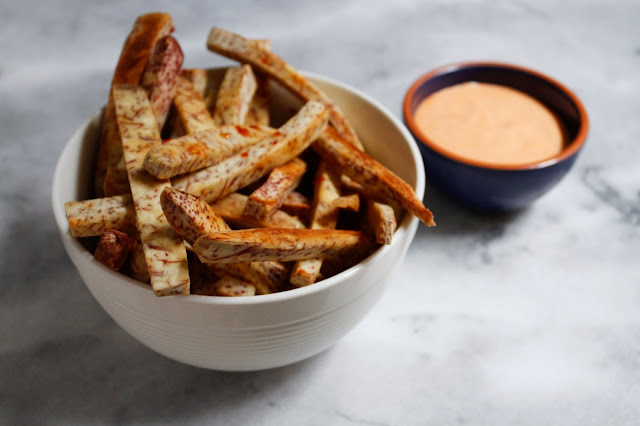 Taro is one of those flavors I didn't really discover until I moved to Chinatown. I first discovered the root vegetable in the form of a bubble tea. If you've never tried taro the idea of a root vegetable flavored sweet iced beverage may sound strange, but with taro, it just works. 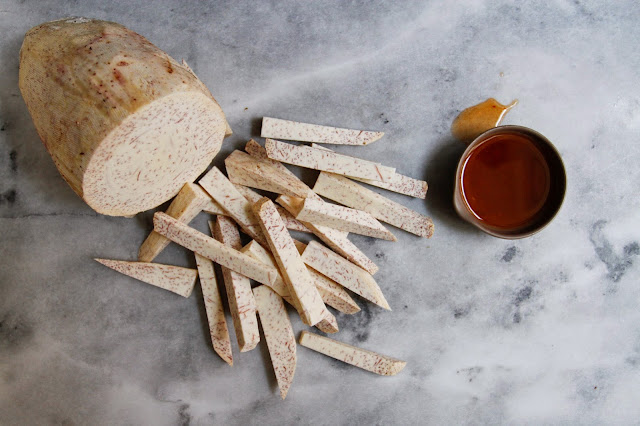 Taro bubble tea (or, a taro slush- preferably with lychee jelly), tastes a bit like cotton candy, and a bit like coconut, with perhaps a faint vanilla note. As does taro ice cream, also, both the ice cream and the bubble tea are usually purple. Actual taro tastes nothing like any of those things, and a lot more like a potato. It is, however, swirled with lovely purple bits. 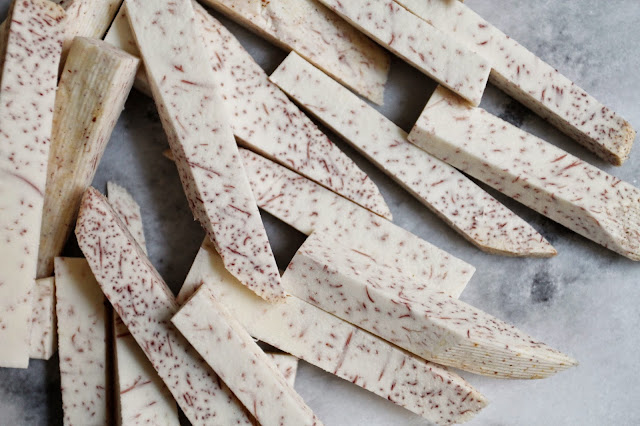 Taro, when served as a savory dish, tastes quite a bit like a white potato, but with a bit more flavor, and perhaps a dash of yam-like sweetness. However taro has a much lower glycemic index than white potato, is high in potassium and vitamin A, and has some great antioxidant properties. 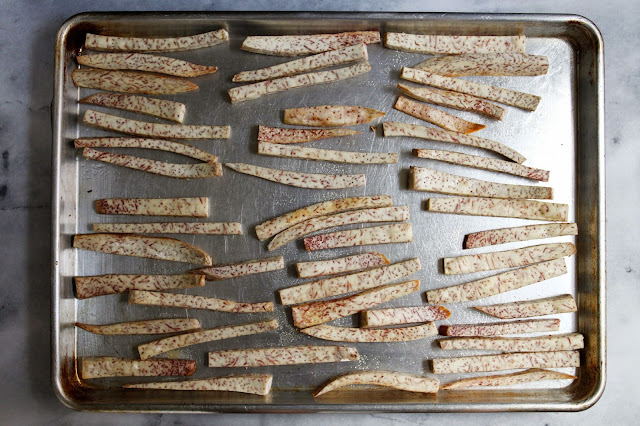 My first foray into savory taro was taro chips, which I love. Soon after I discovered taro fries at An Choi, a tasty Vietnamese spot by my apartment. It was there that S first suggested that we could make the fries ourselves at home. Taro is easily found in our neighborhood, as it's common in chinese cuisine, so if you can't find it at your regular grocery store, I would check your local asian market. 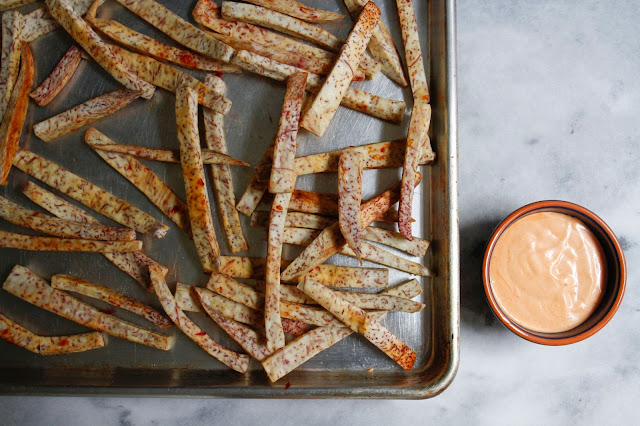 The fries at An Choi are tossed in a spicy-sweet glaze that is heavy on the fish sauce. I wanted to maintain that same sweet-spicy-funky flavor, but cut down a bit on the fish sauce, allowing the taro flavor to shine more. 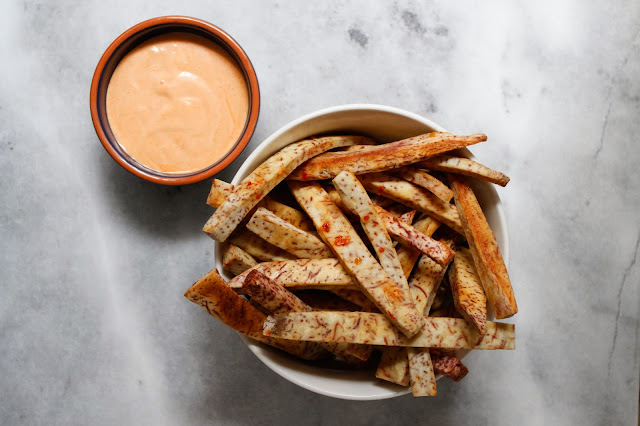 The results are delicious. These taro fries crisp up wonderfully on the outside while the inside has a great texture, a bit heartier than regular white potato, and the glaze is delightful, a bit spicy, a bit funky, and with great sweet notes, it mixes really well with the creamy-spicy sriracha mayo. These fries make a fantastic appetizer or side dish. Or even an extra-tasty movie night snack. Enjoy! 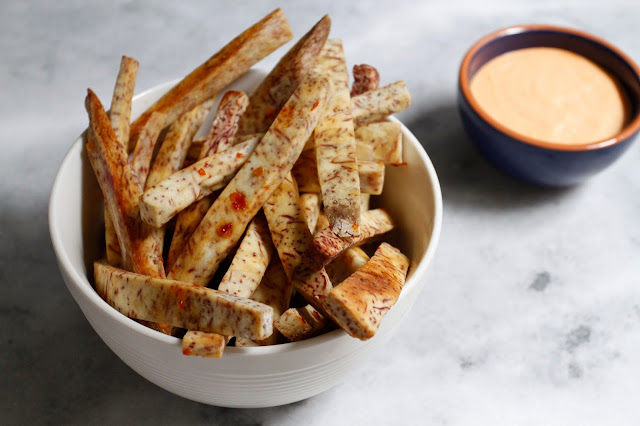 Preheat oven to 400 F, use a bit of olive oil to grease a large baking pan.

Combine all glaze ingredients in a small bowl or measuring cup, whisk until well combined. Set aside.

Peel the taro (it peels just like a potato), and cut into fries about 1/2" thick. Place in a large bowl, drizzle with 1 tbsp olive oil and 1 tbsp sesame oil, and toss well to coat. Spread fries out in a single layer on the greased baking pan, and sprinkle with salt and a bit of pepper. Bake for 20-25 minutes, until golden brown on the edges, and crisp on the outside.

While the taro roasts, combine the mayo and sriracha in a bowl and stir until the sriracha is smoothly mixed into the mayo. Set aside.

When you remove the taro from the oven, don't turn the oven off, you'll need it in a moment. While the taro is still hot, remove it from the pan and pop it in a large shallow bowl, drizzle the glaze over the taro and quickly toss well to coat the fries in glaze. Spread the taro back out on the same baking pan (don't worry about it being too neat, they can overlap a little bit this time) and pop it back in the oven for about 4 minutes, to set the glaze, so the fries won't seem wet.

Remove the taro from the oven after 4 minutes, and serve warm with the sriracha mayo for dipping. 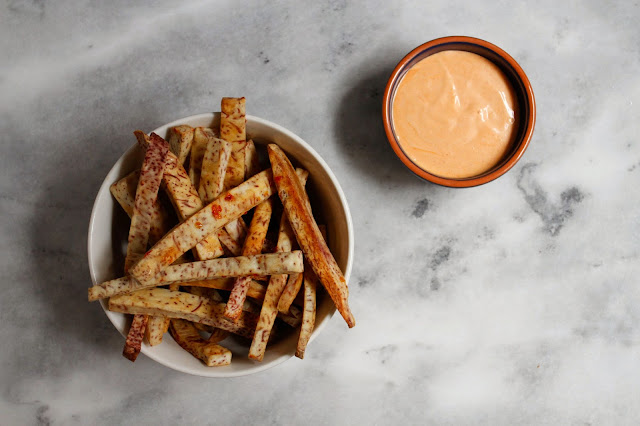 Posted by Little Market Kitchen at 10:22 AM