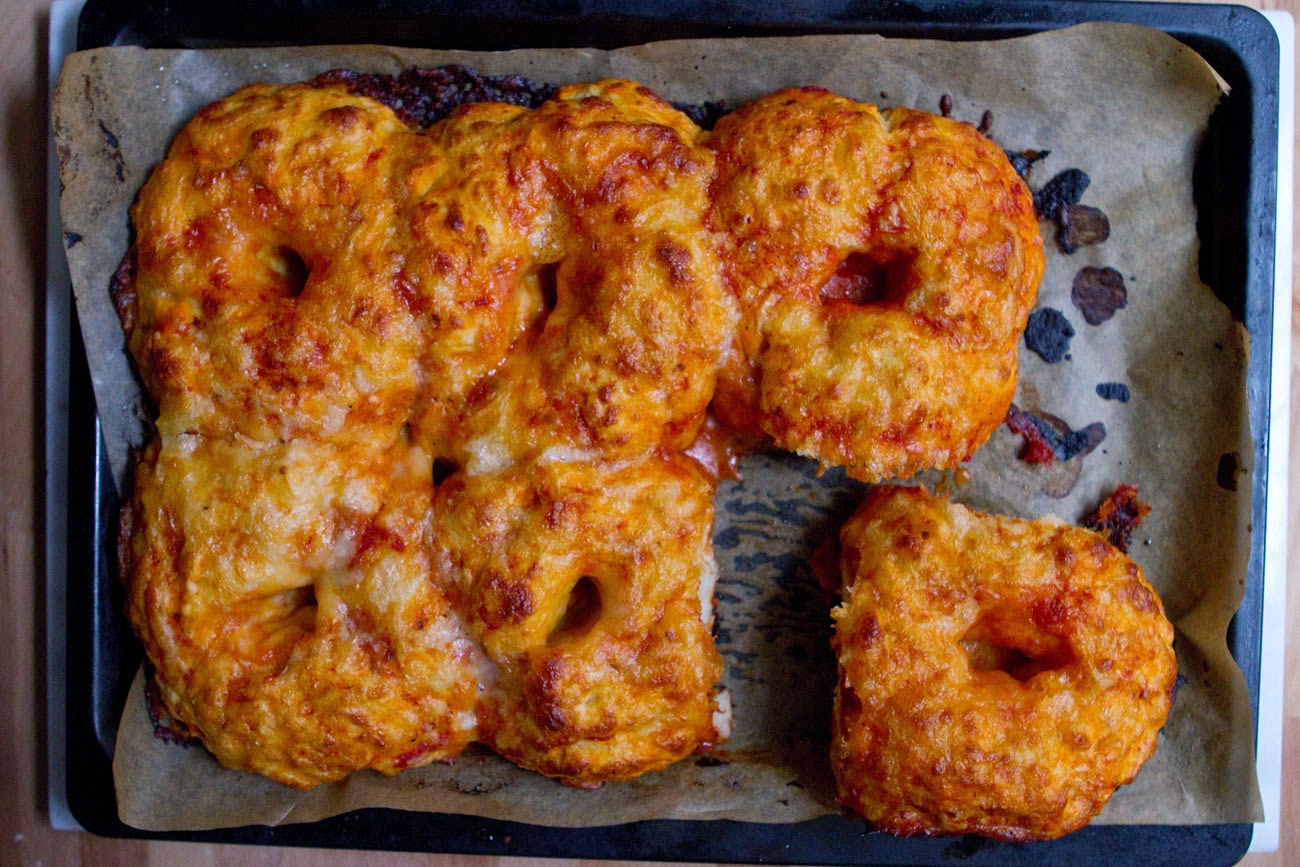 Happy 100th post to Little Market Kitchen! Seriously, this is it, 100 posts. It took me a while longer to get to than I would have liked, but here we are, a year and a half after I started, with 100 posts! That's 100 recipes, all of them things I would gladly eat again. I hope you've tried some of them too, readers! 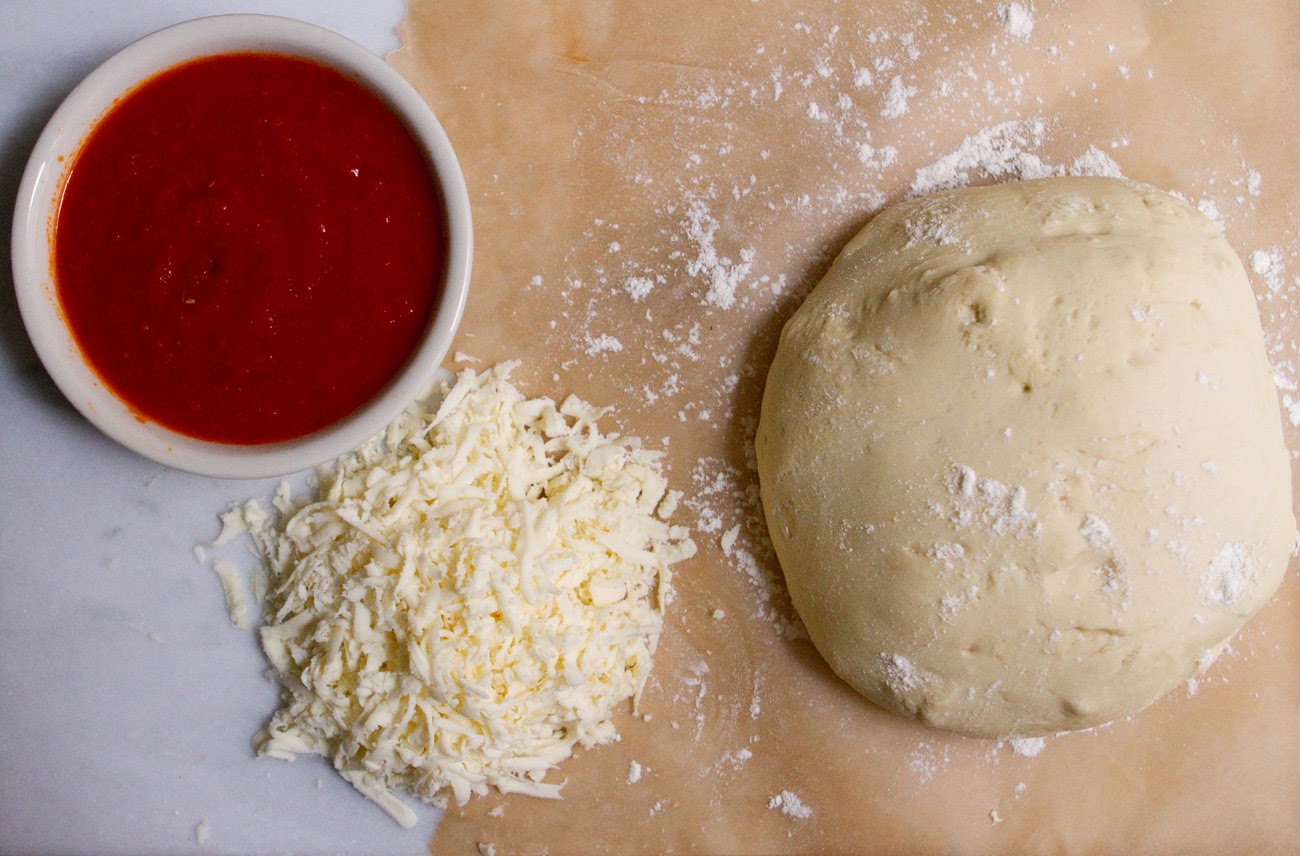 For my 100th recipe I decided to go with a recreation of a food, the mere mention of which makes me nostalgic for my childhood in Ohio. It's a very familiar (and beloved) food for most Clevelanders. In Cleveland, there is an incredible market, known as the Westside Market, and one of the bakers at the market sells an incredible product. Saucy, cheesy, doughy, easily handheld, fabulous for breakfast, lunch, and snacks- Pizza Bagels have it all. 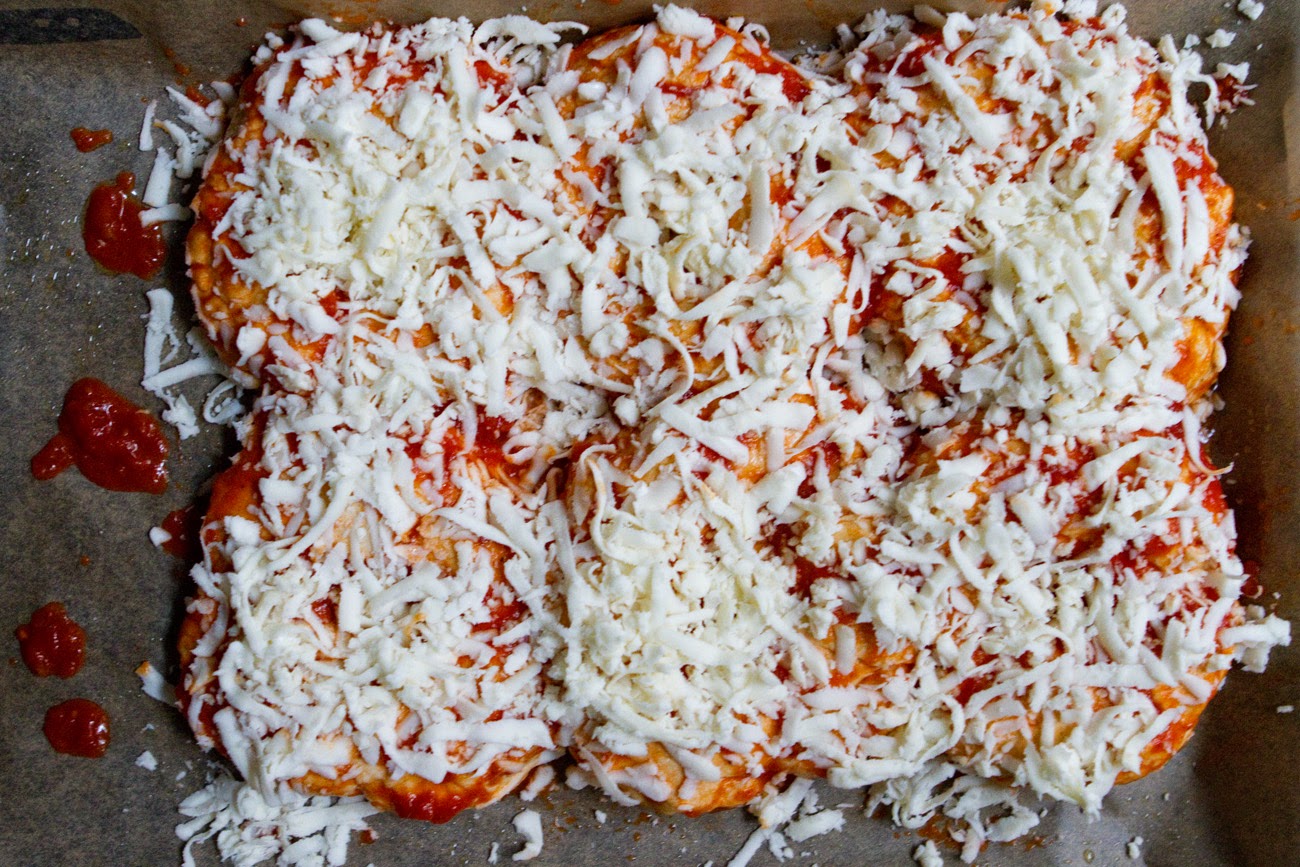 Everyone who grew up going to the market in Cleveland has fond memories of Pizza Bagels. They're utterly unlike anything called a pizza bagel that I've ever had in any other part of the country. They are not sliced bagels topped with sauce and cheese in place of butter and cream cheese. They are not toasted to melt the cheese. No, Pizza Bagels are whole, unsliced bagels, covered in pizza toppings prior to ever being baked. 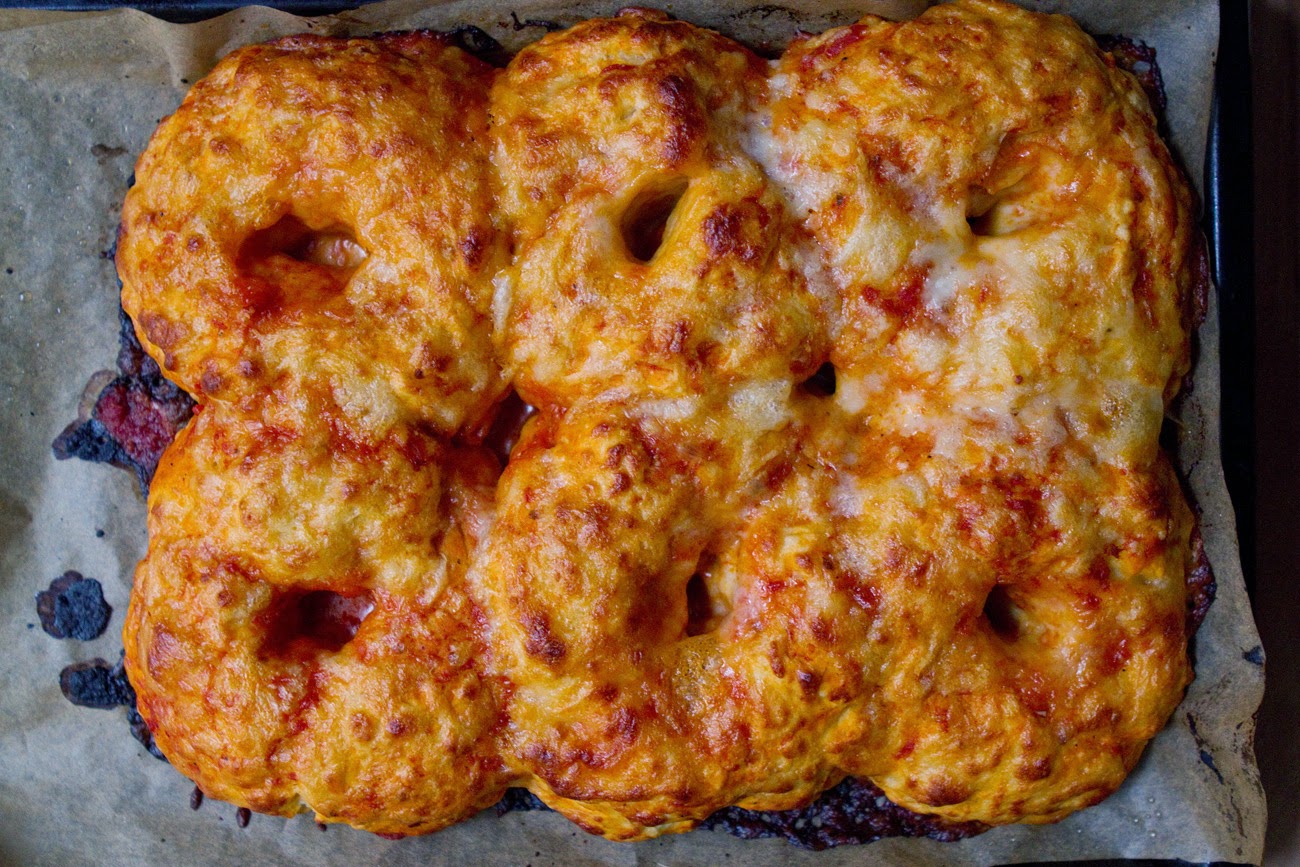 These guys didn't start life off as a plain bagel, no sir, before these were Pizza Bagels, they were just lumps of raw dough. The Cleveland Pizza Bagel dough is not standard bagel dough, either. Over the holidays I went to the market the day I left town specifically to get Pizza Bagels to bring back to NYC (and some spicy smoked meat sticks). This was the first Pizza Bagel I'd had in a few years, but it was just as I remembered- the dough was soft, softer and more luxurious than the average bagel, with just a dash of sweetness. 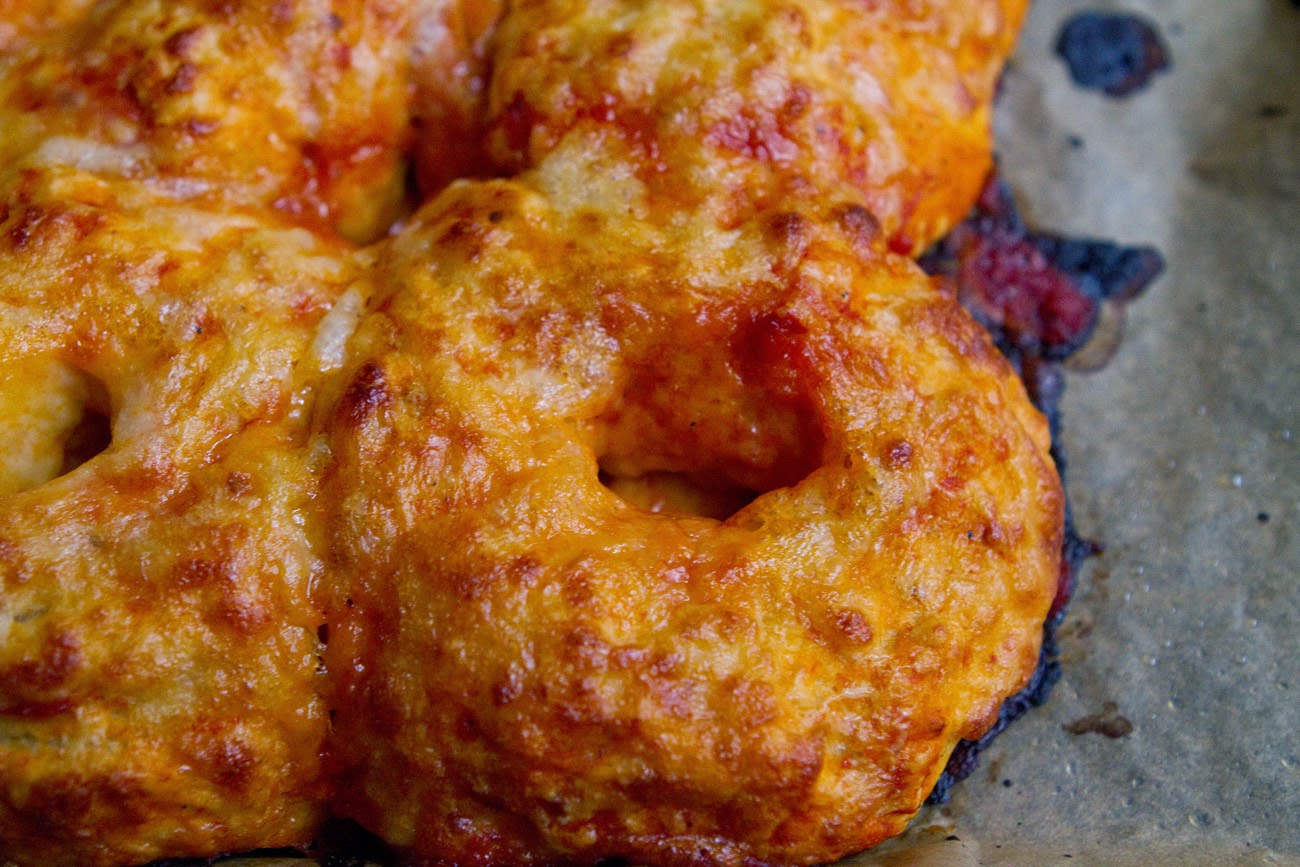 Pizza Bagels don't have that slightly hard outside regular bagels have, and their insides aren't quite as chewy, so I knew I did not need to boil these bagels. But they're also fluffier than a typical bagel, and a bit sweeter. Their soft, hearty-yet-fluffy consistency is so perfect and lovely and wonderful I spent a while figuring out how to recreate it. Naturally, Frickaccio's the Pizza Bagel bakery, guards their secret recipe closely, and I couldn't find a single copycat recipe out there either. 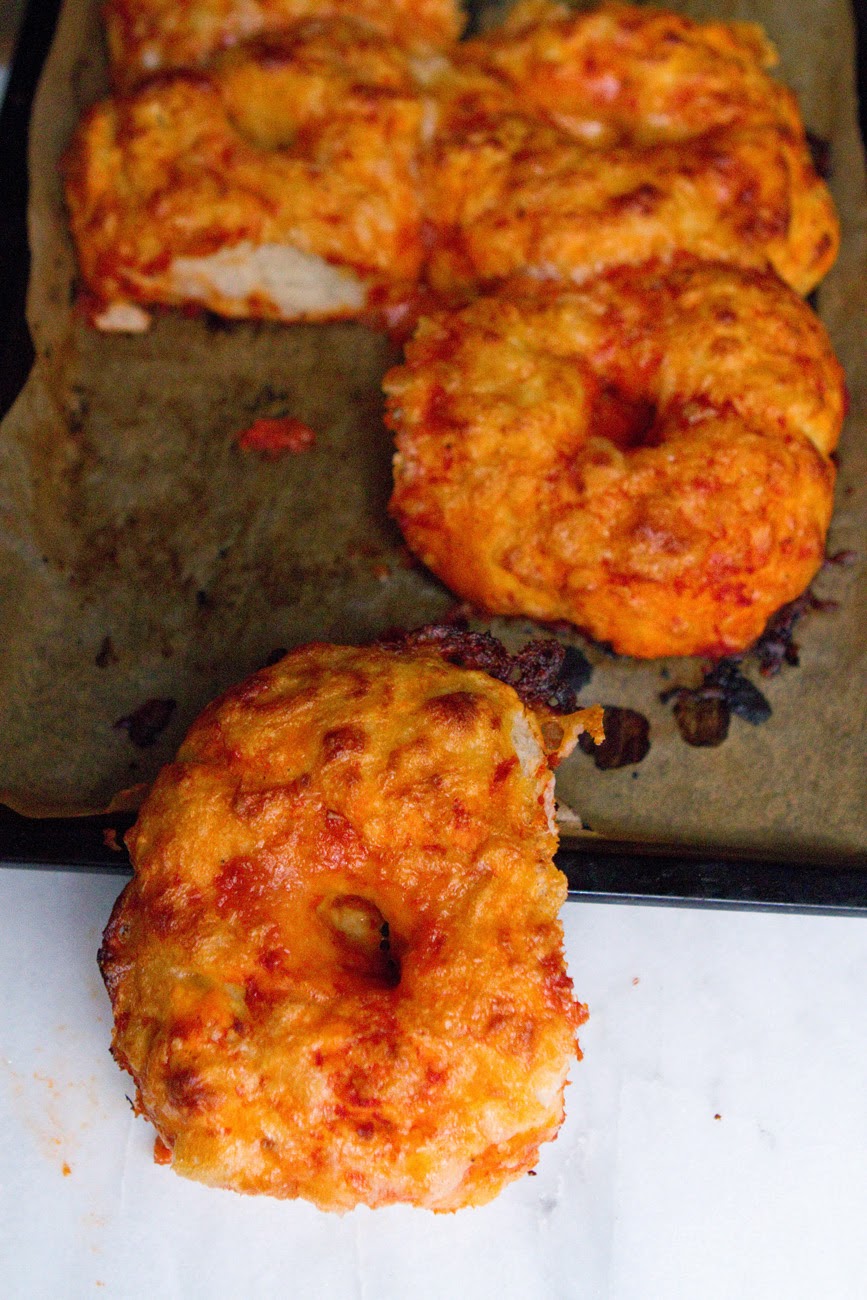 I though about the closest dough to a Pizza Bagel I'd ever tried outside of Cleveland, and I came up with Spumoni Gardens, the famous Sheepshead Bay pizza purveyor. If you've ever had their thick, fluffy, slightly sweet Sicilian pizza, then you've come pretty close to a Cleveland Pizza Bagel. 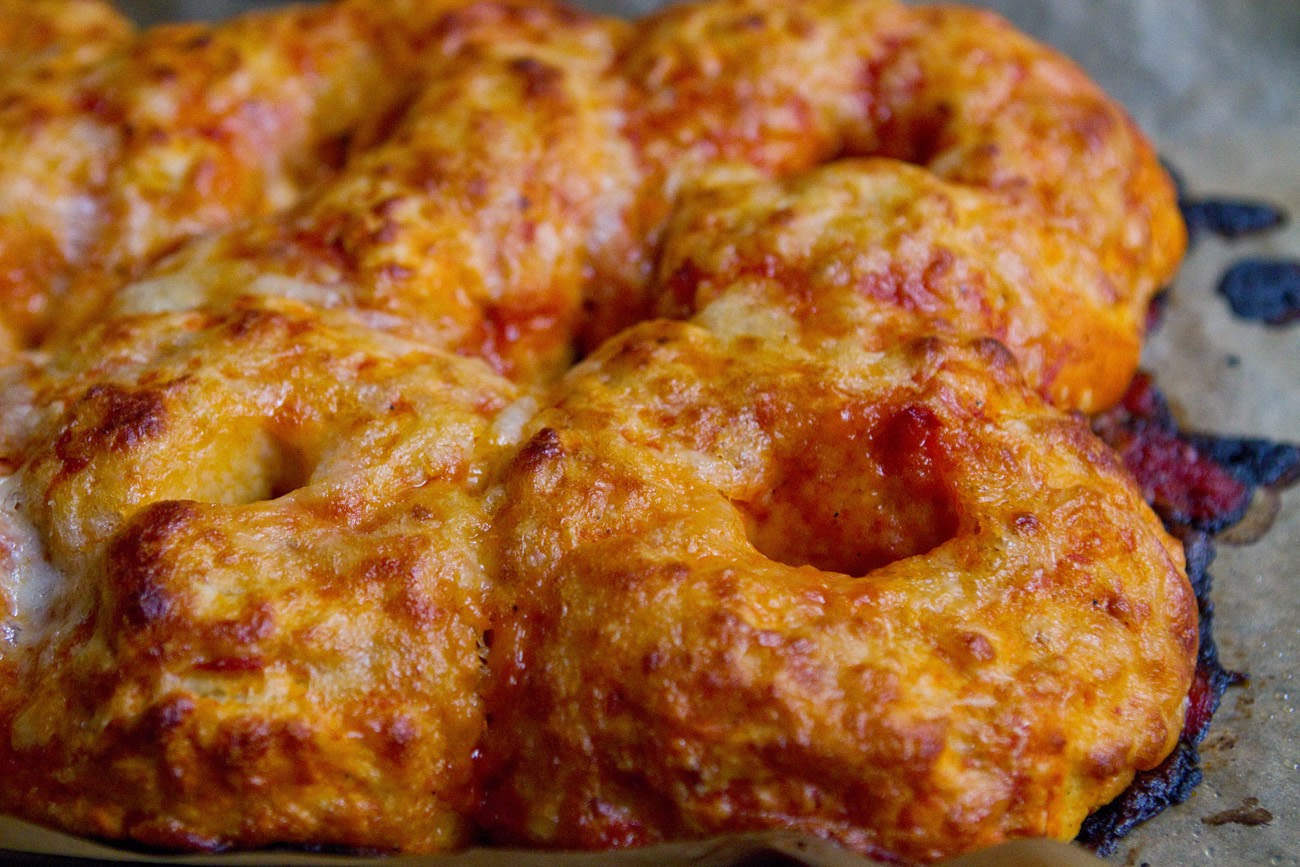 So, I began by adapting a Sicilian pizza crust recipe so it would rise a bit higher and taste a bit sweeter. Then I tasted my marinara and sweetened that a bit too because apparently everything is sweeter out in the midwest. I tweaked the cooking temperature since pizzas cook fast and hot, but bagels usually cook a touch slower at a lower (but still high) temperature, 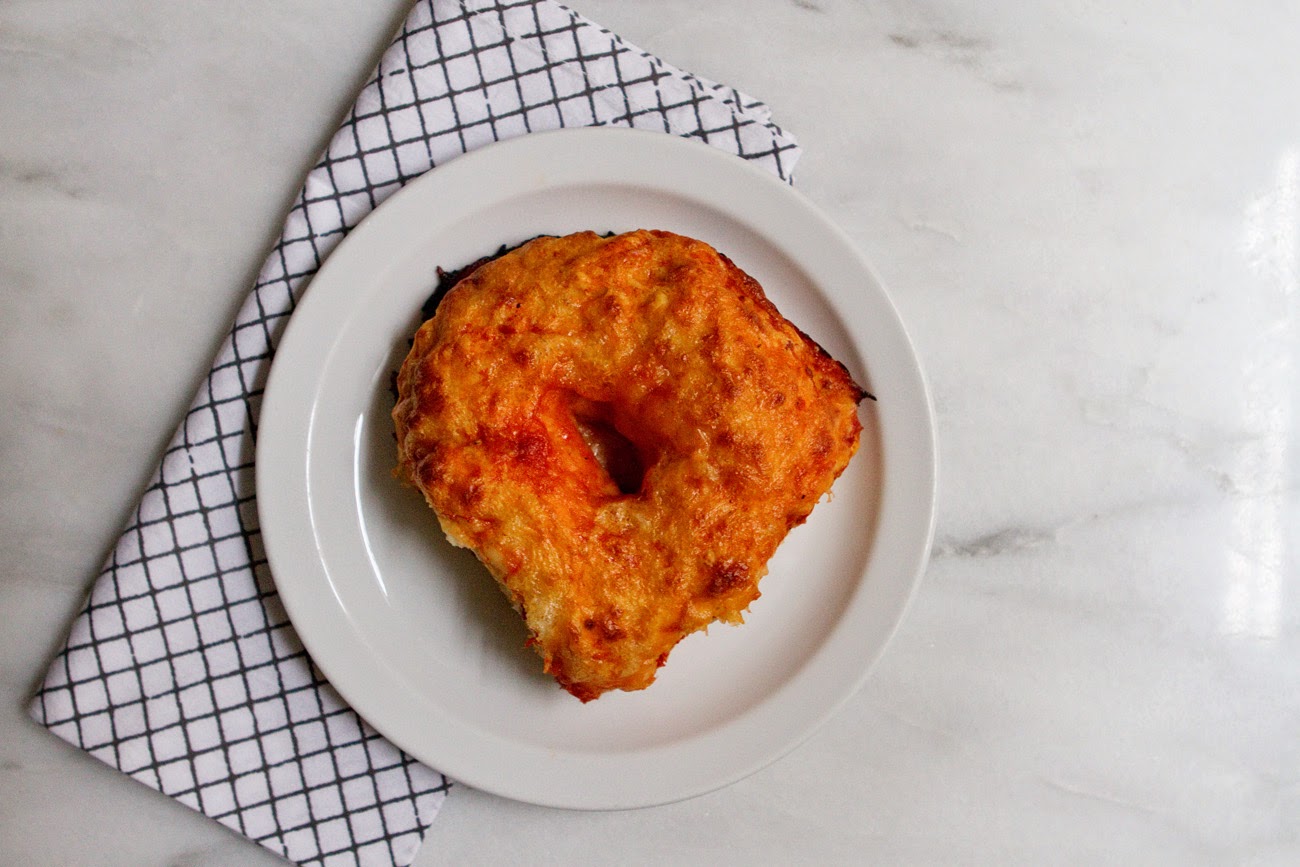 The result is fantastic. The bagel is fluffy, the sauce soaked in just the right amount, and stayed just the perfect amount of slightly wet on the outside without making the bagel seem damp, and the cheese melted and bubbled and browned wonderfully. The dough flavor is pretty spot on, with it's touch of sweet and saltiness, and while they're a bit cheesier than their Cleveland counterparts I believe more cheese is never a bad thing! 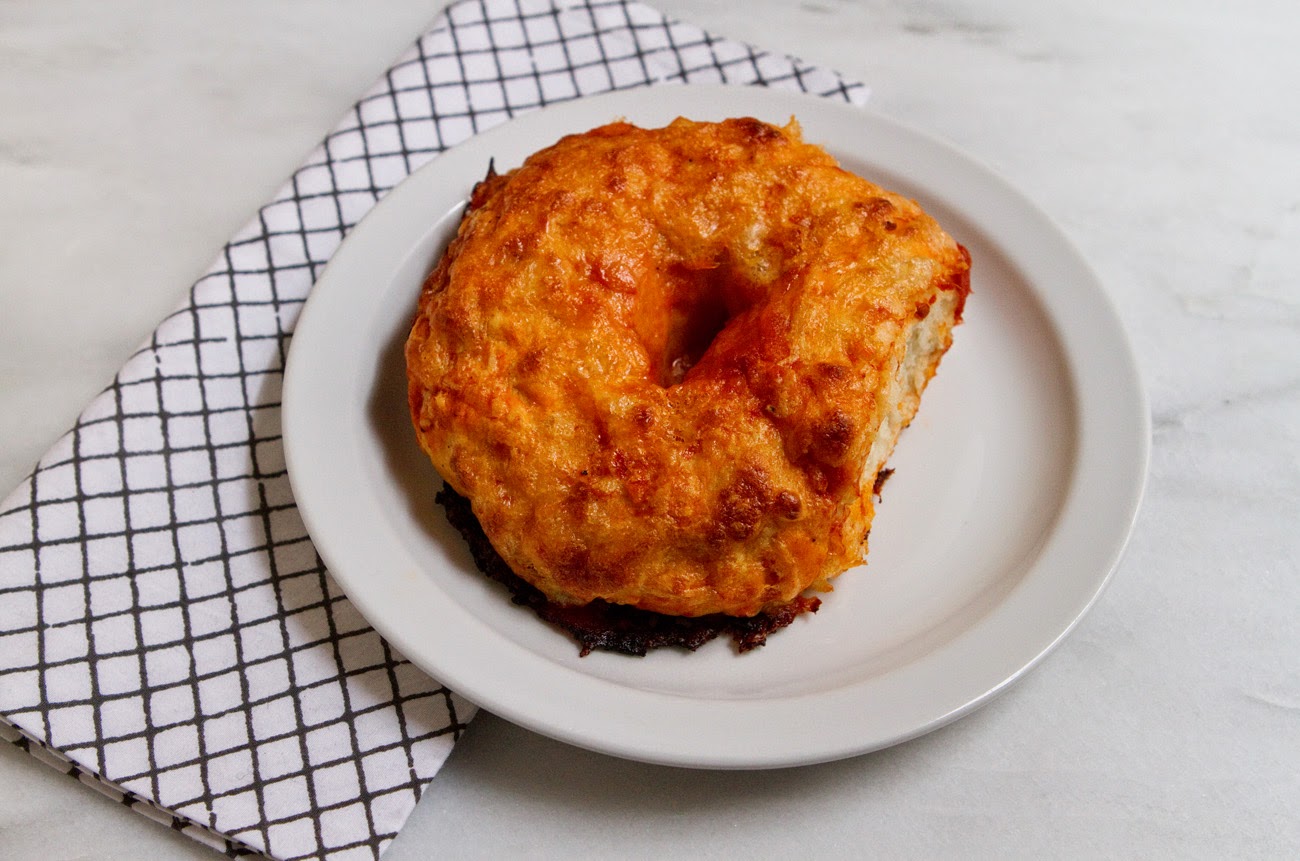 These pizza bagels were wonderful. S and I ate them for breakfast on Monday when I made them, then again for dinner alongside bowls of tomato soup. I've eaten them as after work snacks as well, and satisfied my late night munchies with Pizza Bagels more than once. I hope you like them as much as we do! 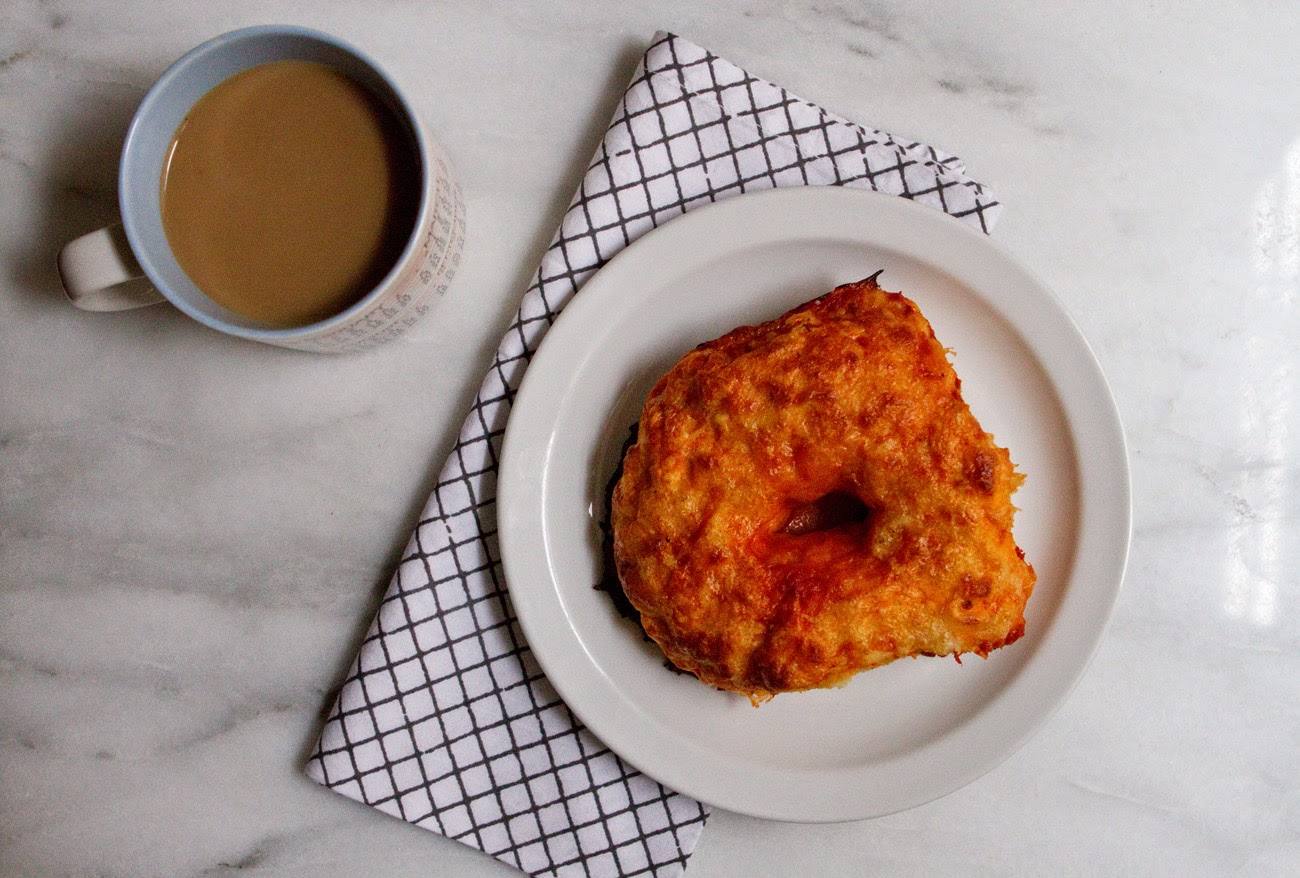 In a large bowl, stir together 1/2 C flour, 1/2 C warm water, and the yeast. Cover with a towel and allow to sit in a warm place for 15 minutes.

In a separate bowl combine the rest of the flour, the 1 tbsp sugar, and the salt.
Alternating, add the dry ingredients, the oil, and the remaining cup of water to the yeast mixture, while stirring with a wooden spoon, until a dough forms.

If dough is too sticky add more flour until it is workable. Dump dough out on a floured surface and knead for about 10 minutes, until the dough ball is springy and the dough is not shaggy.

Place in a well floured bowl, cover with a towel, and allow to sit in a warm place for 1-2 hours, or until doubled in size.

While dough rises, grate the mozzarella and set aside. In a bowl large enough to place a bagel in, add the marinara and the 1/2 tsp sugar. Mix well.

Line a half sheet pan or cookie sheet in parchment paper, or lightly oil it.

Once dough is risen, preheat oven to 400F. Remove dough from the bowl, and divide in half. Divide each half into four equal pieces. Shape pieces into balls, then pop your thumb through the middle to make bagels. Don't be too concerned with neatness, these don't need to be perfectly round like typical bagels.

Dip each bagel into the marinara (completely submerge all sides of it), and place onto the cookie sheet so the bagels edges are just barely, or almost touching. Once all bagels are formed, dunked in sauce, and placed on the pan, brush some extra sauce over top of the bagels so they're all well coated.

Sprinkle the mozzarella over all the bagels until evenly coated. Bake for 20 minutes, until cheese is lightly browned and the bagels are fluffy and lightly golden on the bottom.

Allow to cool for a few minutes before separating bagels, then serve warm. Leftovers can be stored in the fridge and reheated in the oven at 350F for about 5 minutes. Enjoy! 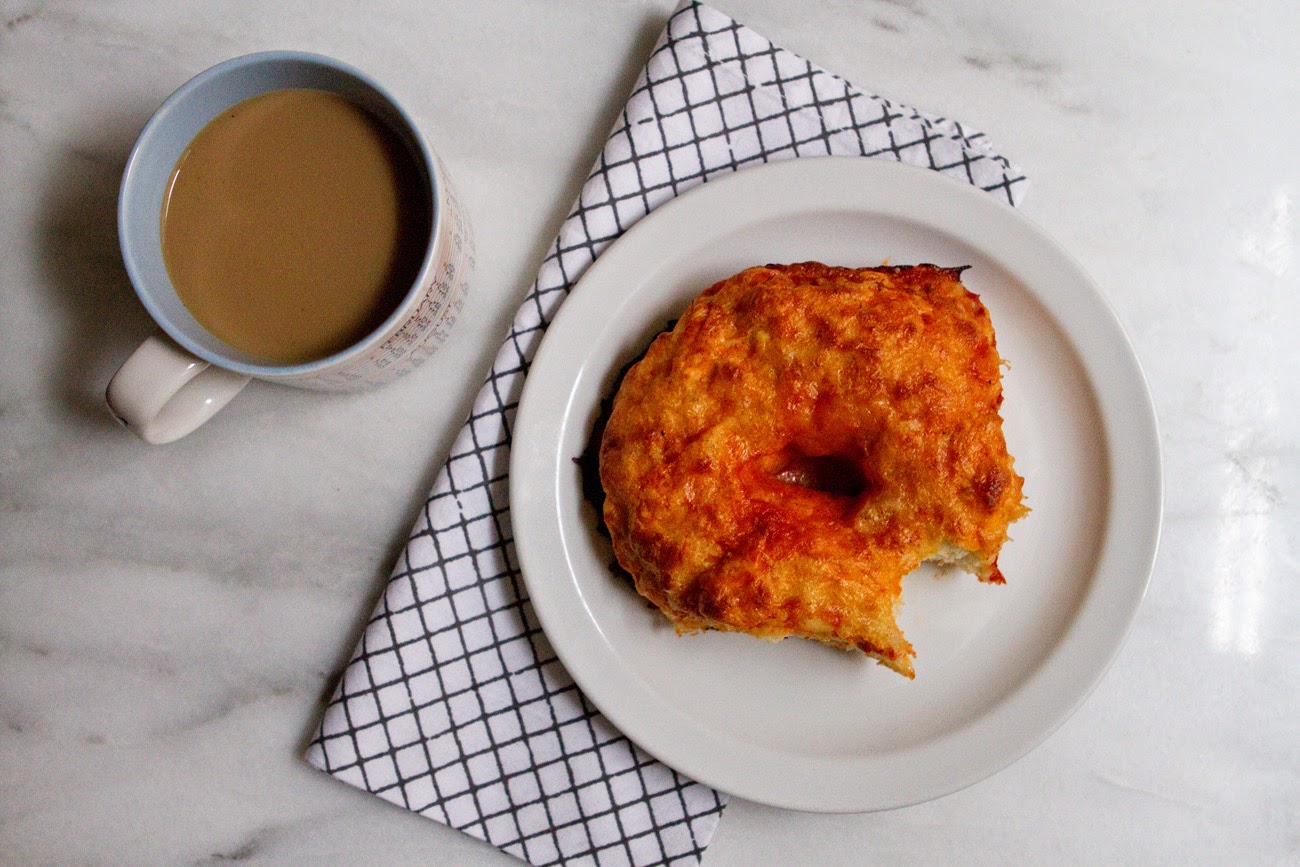 Posted by Little Market Kitchen at 7:14 AM