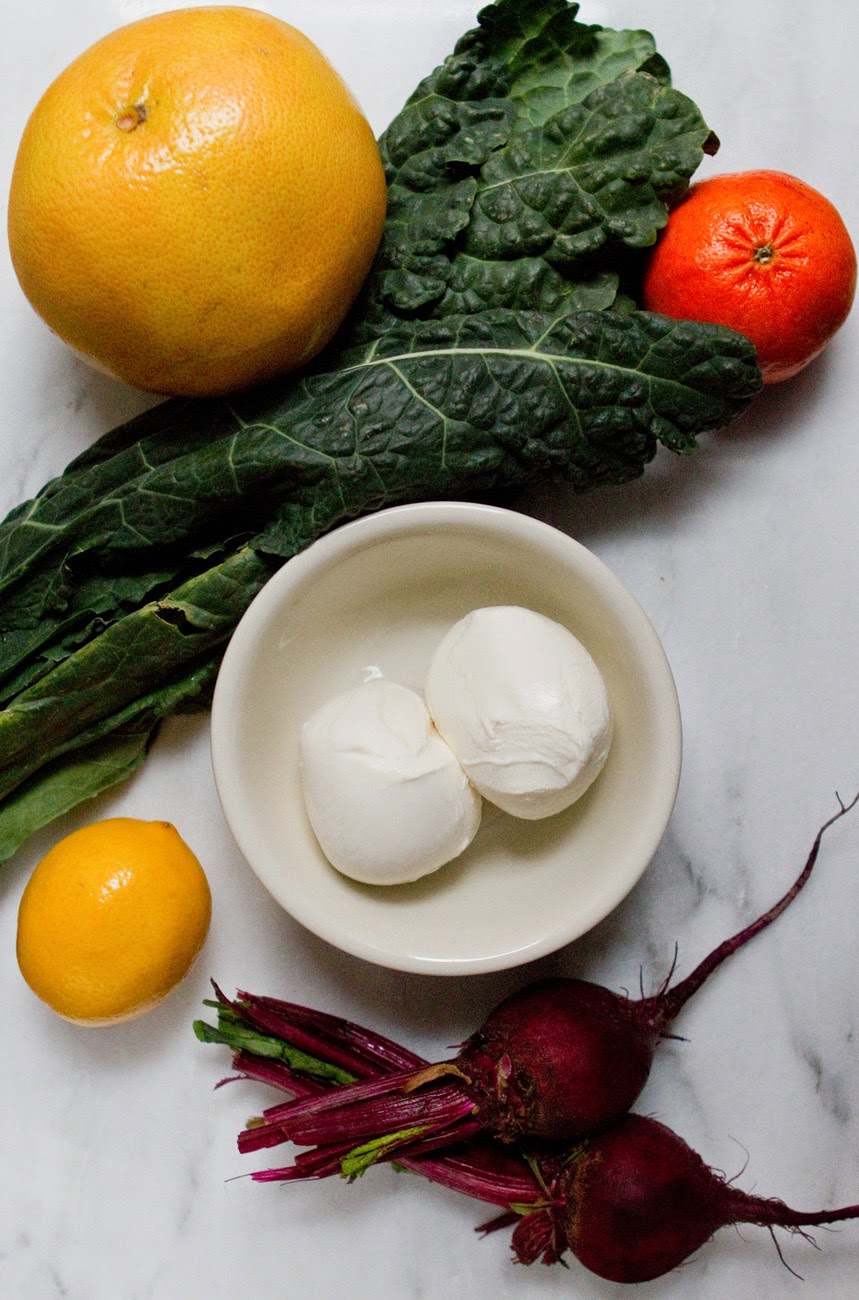 Burrata. One of my favorite Italian cheeses. With it's delicate, globulous mozzarella outsides and its soft, luscious, creamy almost-liquid insides. In the summer I like it with tomatoes and basil, or with strawberries and a bit of balsamic vinegar, but in the winter when citrus is in season I make this salad, it's a perfect mix of wintery earthy beets and summery sunshiny citrus.
However, this time, the time I decide to document this lovely winter salad, I made a mistake. A terrible mistake. A nearly salad ruining mistake. A mistake it took trips to two different grocery stores to remedy before dinner. I'll start at the beginning, it began on Monday night, at Whole Foods. 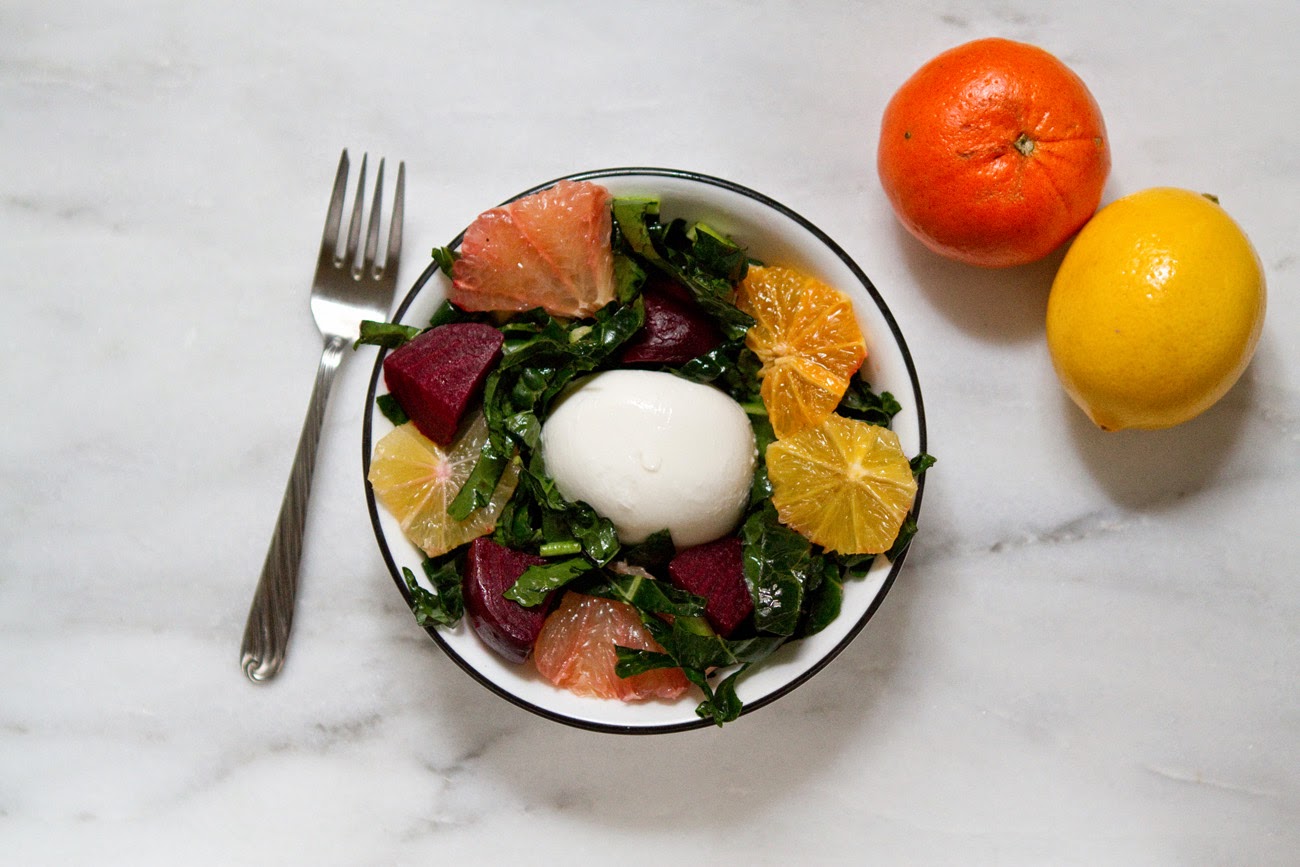 Usually I shoot on the weekends, but on Saturday morning I went to Brooklyn to pick up a strawberry plant I'm helping to try to convince to bear fruit by January for a photo shoot, and on Sunday I had to process photos from a Wedding Reception I also shot on Saturday. So on Monday night after I work I hurried over to Whole Foods to grab ingredients to make this salad on Tuesday morning. I was in a hurry, it was nearly 7 and I still had to get ingredients for this and dinner, and walk the two miles back home, and it was cold out and I was hungry. 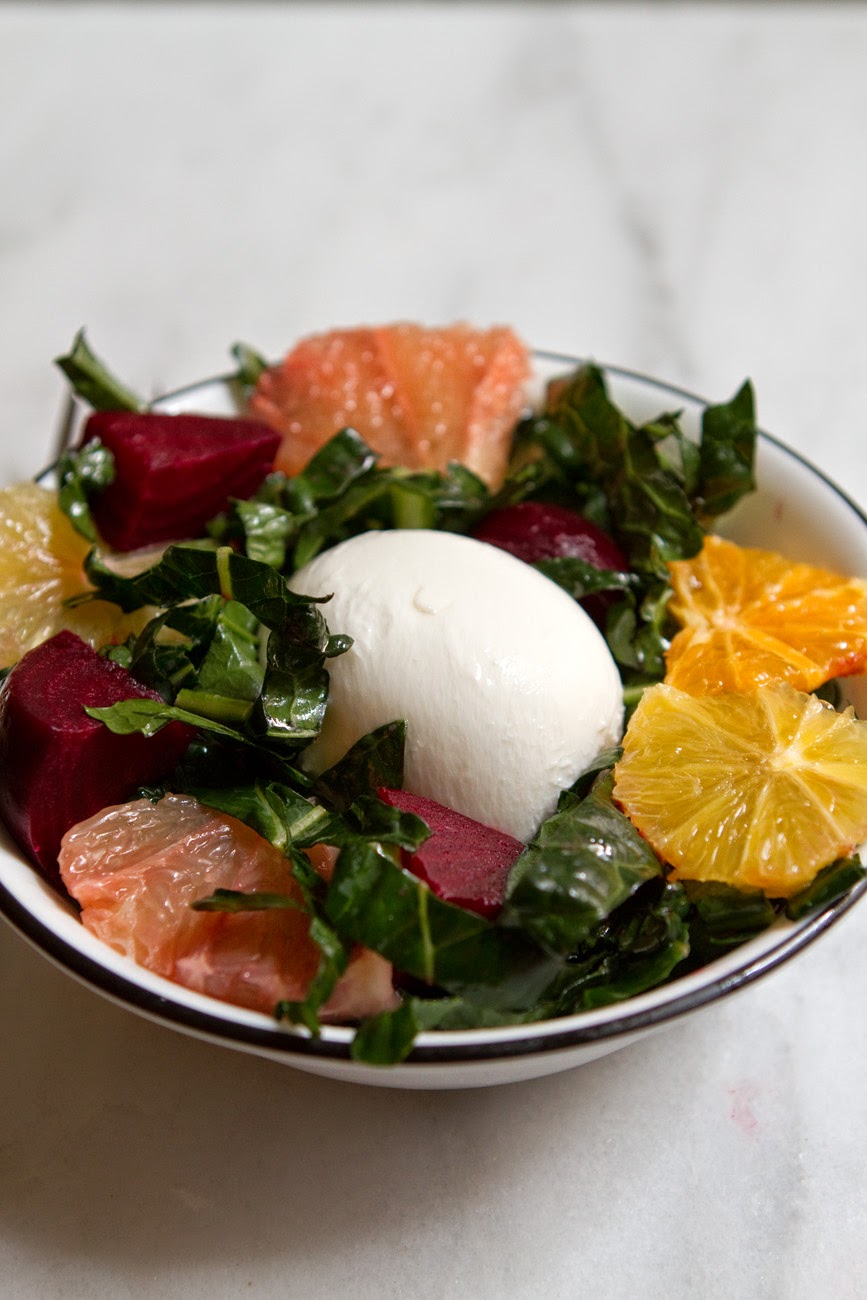 I found my way to the cheese case, and spotted the burrata right away, but upon picking it up I discovered it was one large ball of burrata, and I wanted two small lumps, one for each salad (I actually wanted four, to pick out the best looking ones), but right behind the container with one ball of burrata, I spotted a container with two. I grabbed it and inspected the lumps. Indeed there were two, and they were round and plump looking, so I grabbed a second container, which also had two, popped them all in my cart and boogied on out of there thinking that had gone very well. 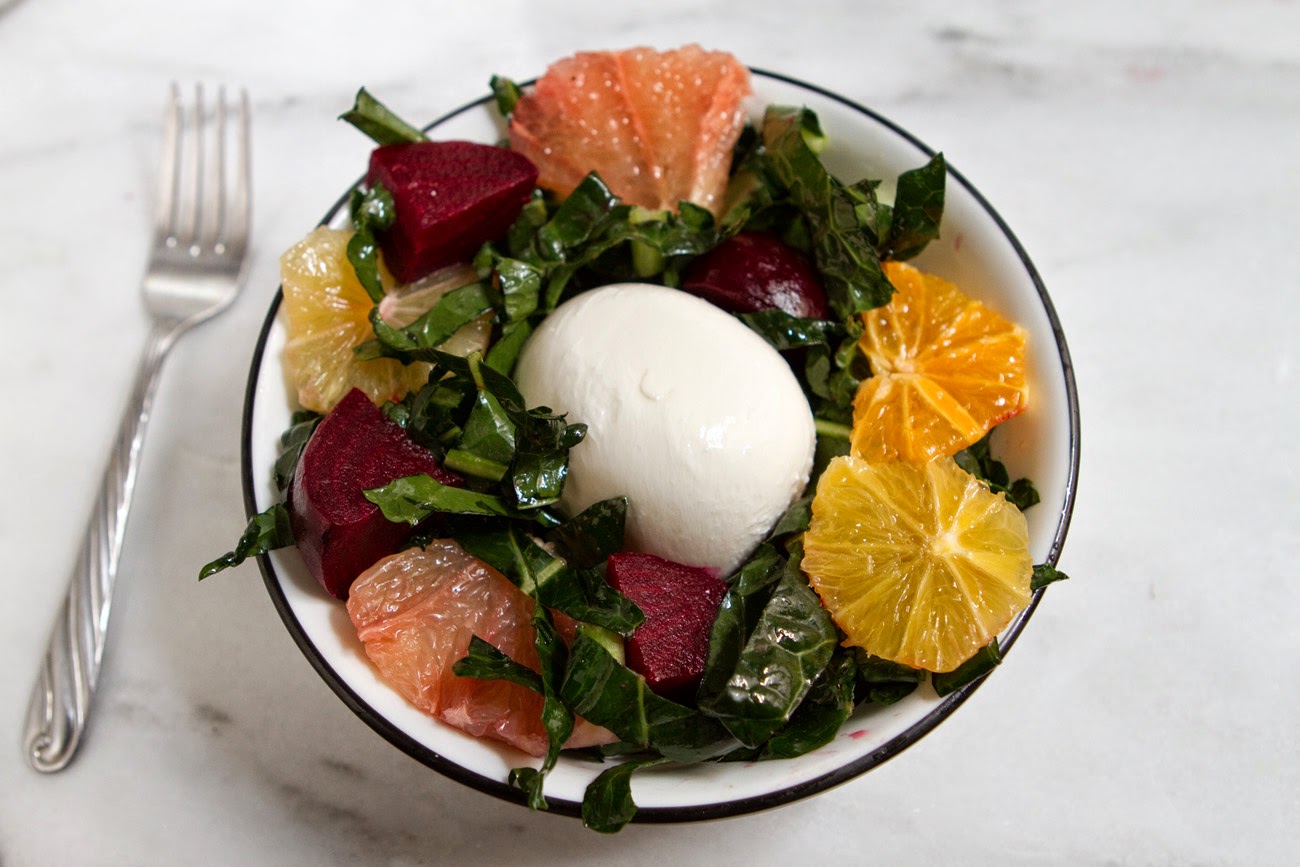 The next morning I began to make this salad. As you'll notice, the burrata doesn't come in until the end, so I left it in the fridge, and prepared everything else. At 1PM, with only two hours before I had to leave for a job, I took the burrata out of the fridge, opened it up, and gently lifted one of the lumps of cheese out of the brine. 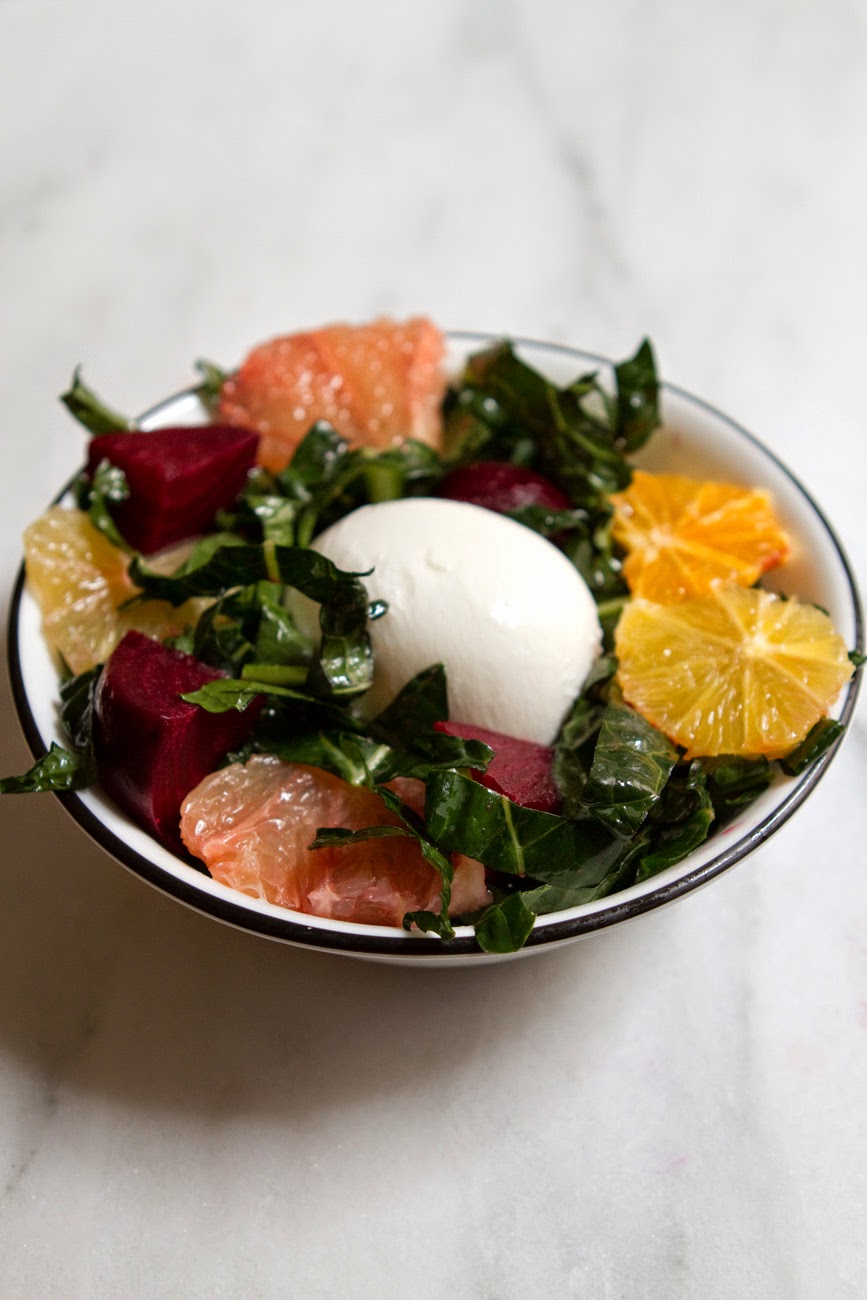 The first thing I noticed was how much less delicate than the burrata I usually buy from Alleva dairy it was, but that wasn't much of a concern. I turned the ball over in my hand, and noticed there was no twisty top part. Now I was concerned. I set the ball down, selected a less attractive one, and cut it open. No creamy, curdly cheese ran out of the center. In fact, the center was totally firm, one hundred percent solid, as solid as fresh mozzarella. Fresh Mozzarella. It's always next to the burrata in the cheese case. But I had looked at the container, I had seen it's label saying burrata. 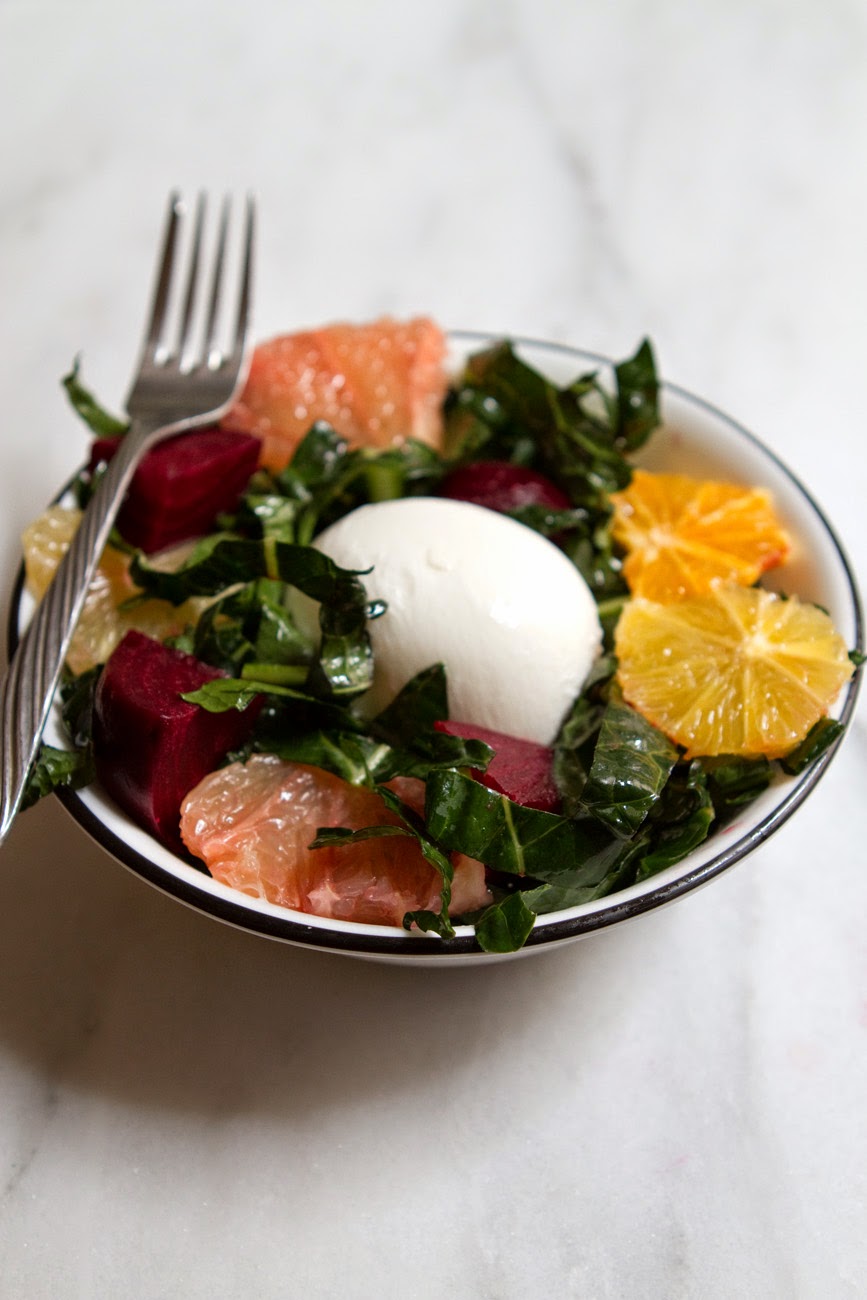 That's when it hit me. I had only checked the label of the first container I picked up, with the one lump of cheese. I grabbed the lid of the container on my counter and read it. Lioni Mozzarella. My heart sank. But I had no choice, I had to work soon, so I shot the salad with the mozzarella you see in these photos. And then I ate it because I was starving. And then I went to work. On my way home I went to a different Whole Foods, where they were entirely sold out of burrata, but I was not to be daunted. I was eating this salad tonight, darn it. So I went to Fairway, where there were three different types of burrata and a sale on Ritter chocolate bars. So I guess the moral of this story is to always check your labels and that I should go to Fairway more. 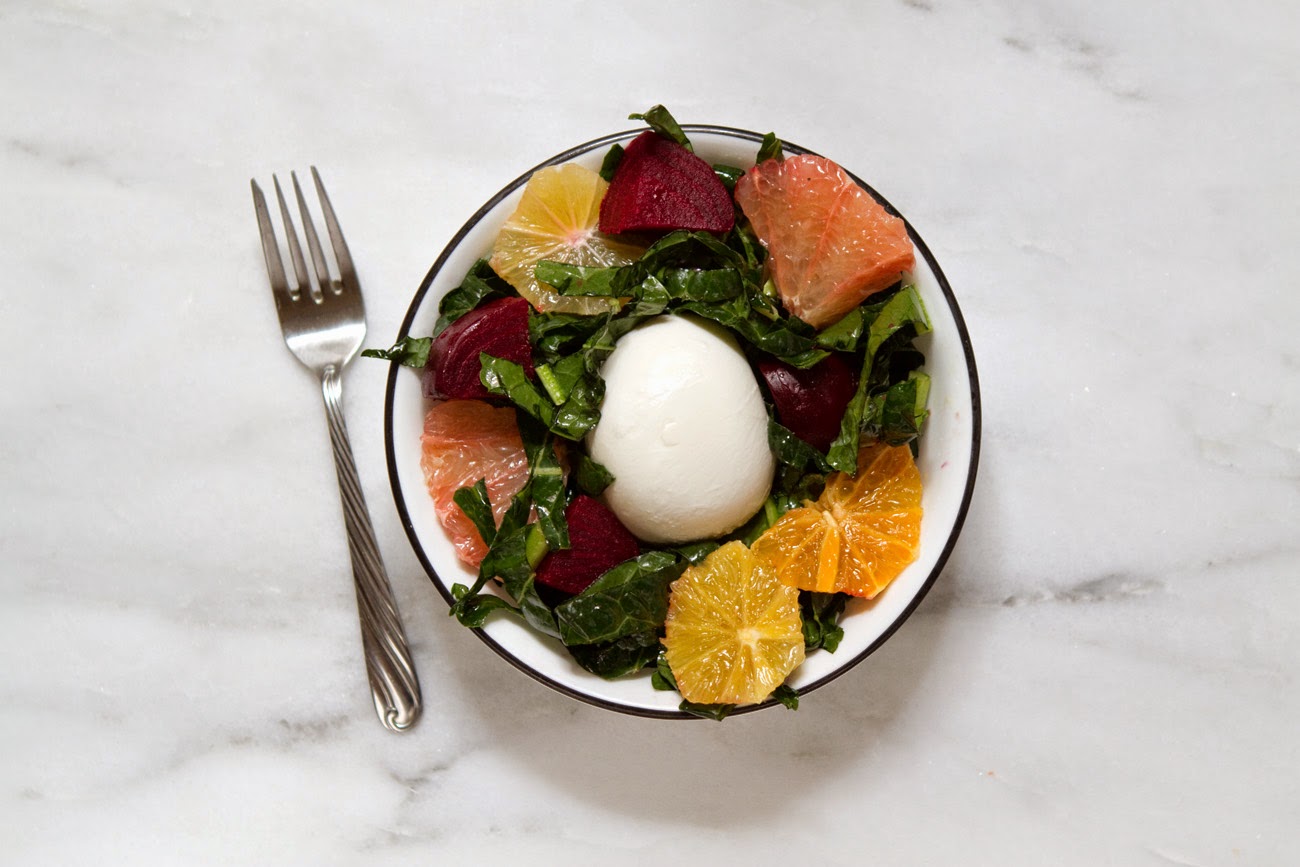 Preheat your oven to 400 degree celsius. Remove the stalks from the beets, drizzle with a dash of olive oil, and wrap in tin foil. Roast for 40-50 minutes, until a fork can be easily poked into them, but they are not super soft. Remove from oven and set aside to cool.

While the beets roast, make the dressing. Combine the vinegar, honey, and a generous dash of salt and pepper in a bowl, and whisk until thoroughly combined. Slowly pour in the olive oil while whisking, and continue to whisk until oil is well incorporated into the vinegar. Stop as soon as dressing begins to thicken. Set aside.

While the beets cool, wash and dry the kale, then stack the leaves up about 5 at a time, roll them up like a long cigar, then slice across the top to produce thin ribbons. of kale. See here for more info. Place the kale in a large bowl.

Once the beets cool, chop them into wedges of your desired size (I did 1 inch wedges, but 1/2" would work if you like smaller beet bites), and add to the bowl with  the kale. Add the dressing and toss to combine. Set aside.

Jubilee the citrus by cutting off the top and bottom, then standing the citrus on it's end and cutting vertically to remove the pith and peel. More info on jubilee-ing here.

Feel free to pause now for 30 or so minutes and allow the kale and beets to marinade in the dressing, which will turn a lovely bright pink. If you'd rather eat sooner, you don't have to let the kale marinade at all.

Gently toss the citrus with the kale and beets. Split the salad between two bowls, and add the ball of barrata to the center of each. 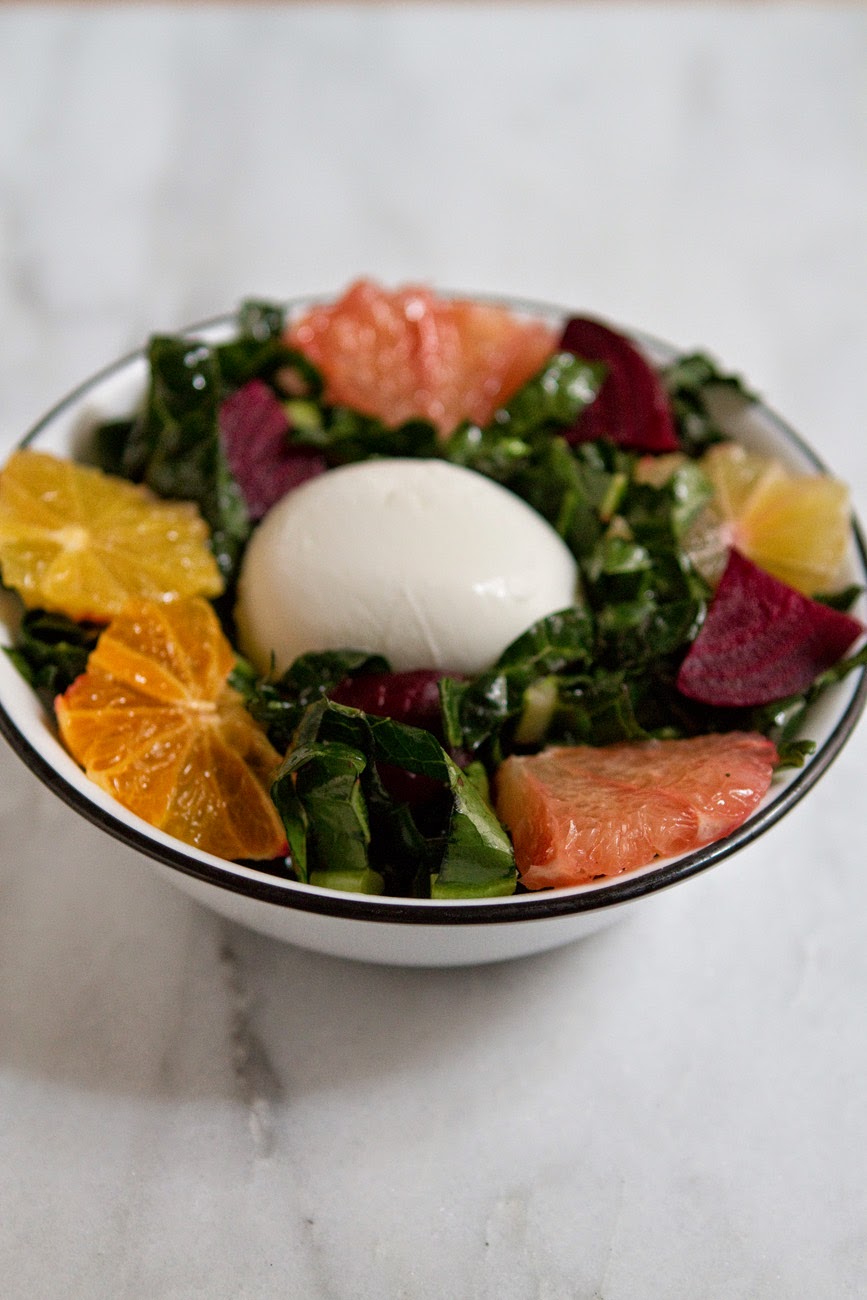 Posted by Little Market Kitchen at 6:55 AM