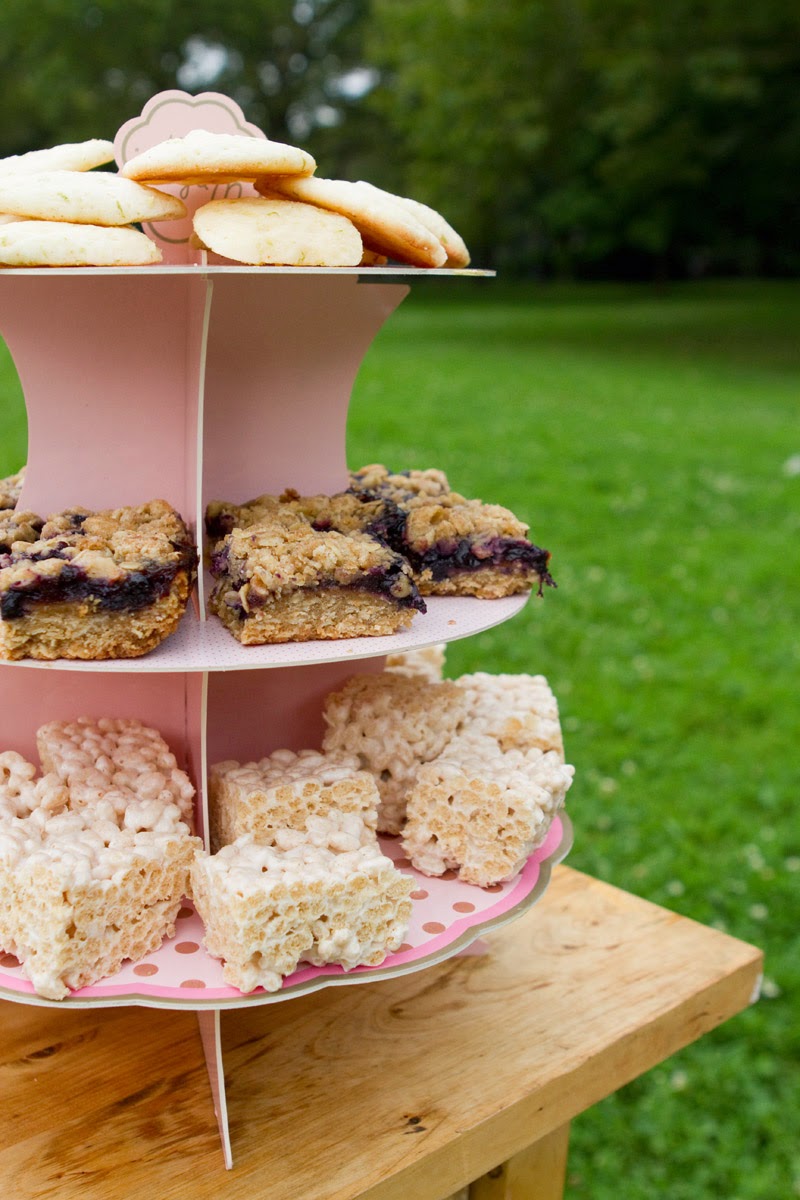 Today I'm bringing you another recipe from the super fun creative meetup I cohosted with Gilit of The Bannerie.  This week it's my Brown Butter Blueberry Jam Bars. They involve so many delicious things, brown sugar, brown butter, jam, and fresh blueberries. 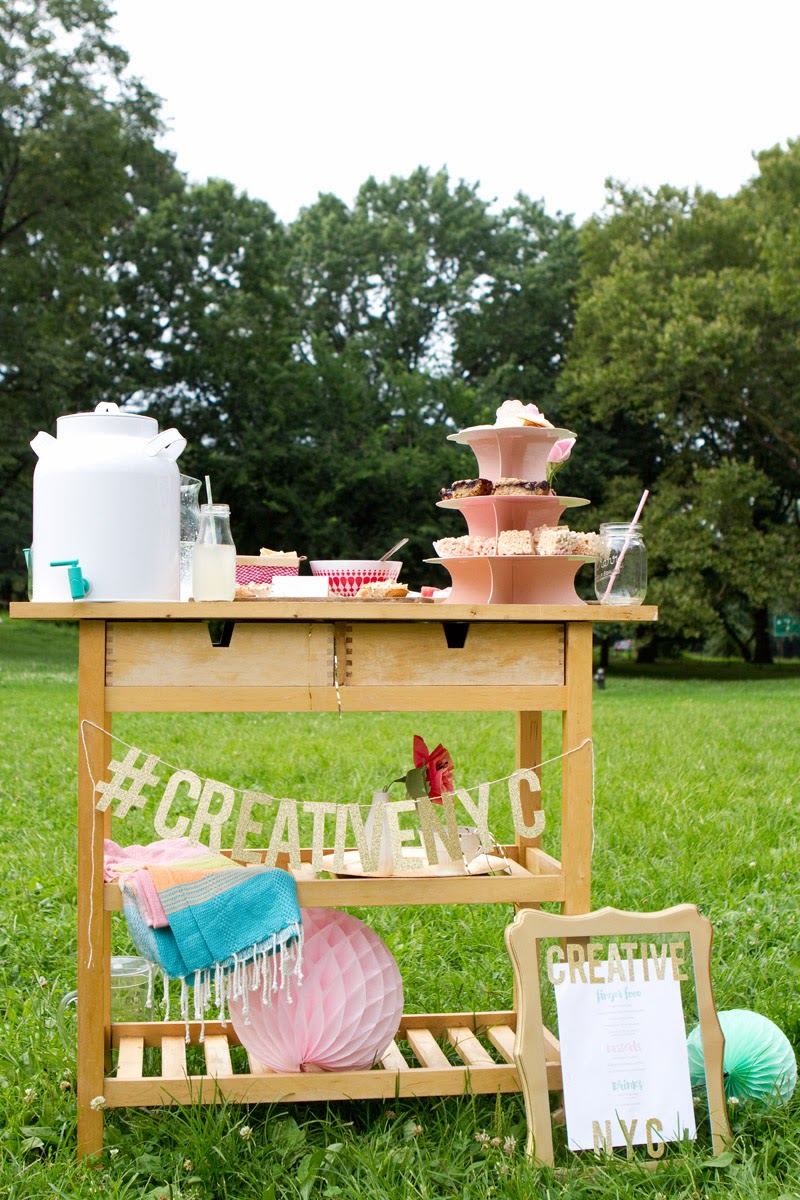 I love jam bars. They're so easy to throw together, and because I always keep one of those industrial sized cardboard canisters of oats around, I almost always have all the ingredients to throw together some type of jam bar. I am all about the simple desserts. 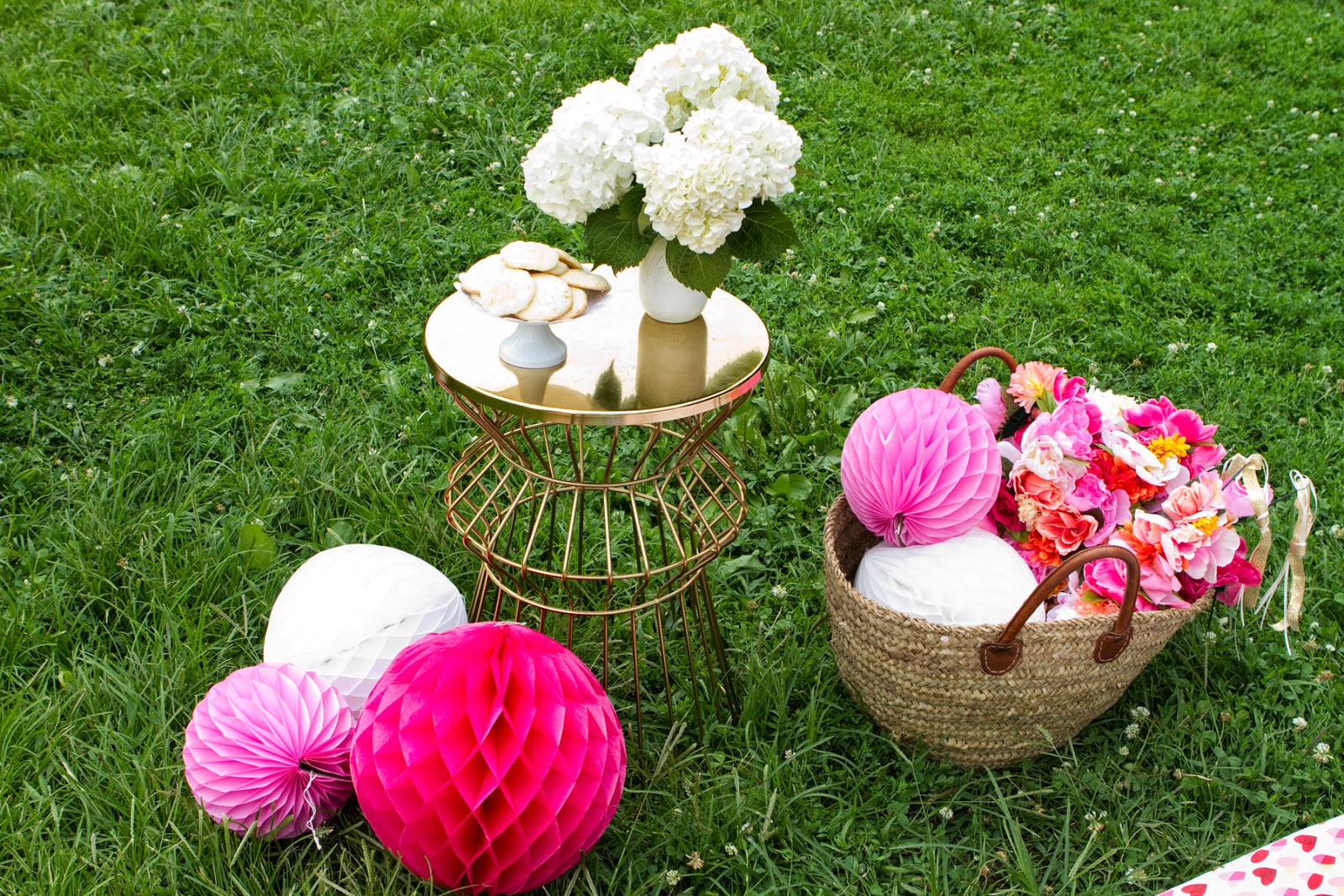 After putting thirty minutes, or even an hour's worth of effort into making a weeknight dinner, the last thing I want to do is cook berries, cream butter, or whip egg whites. But I definitely do want dessert most (every) night, so it's jam bars to the rescue! 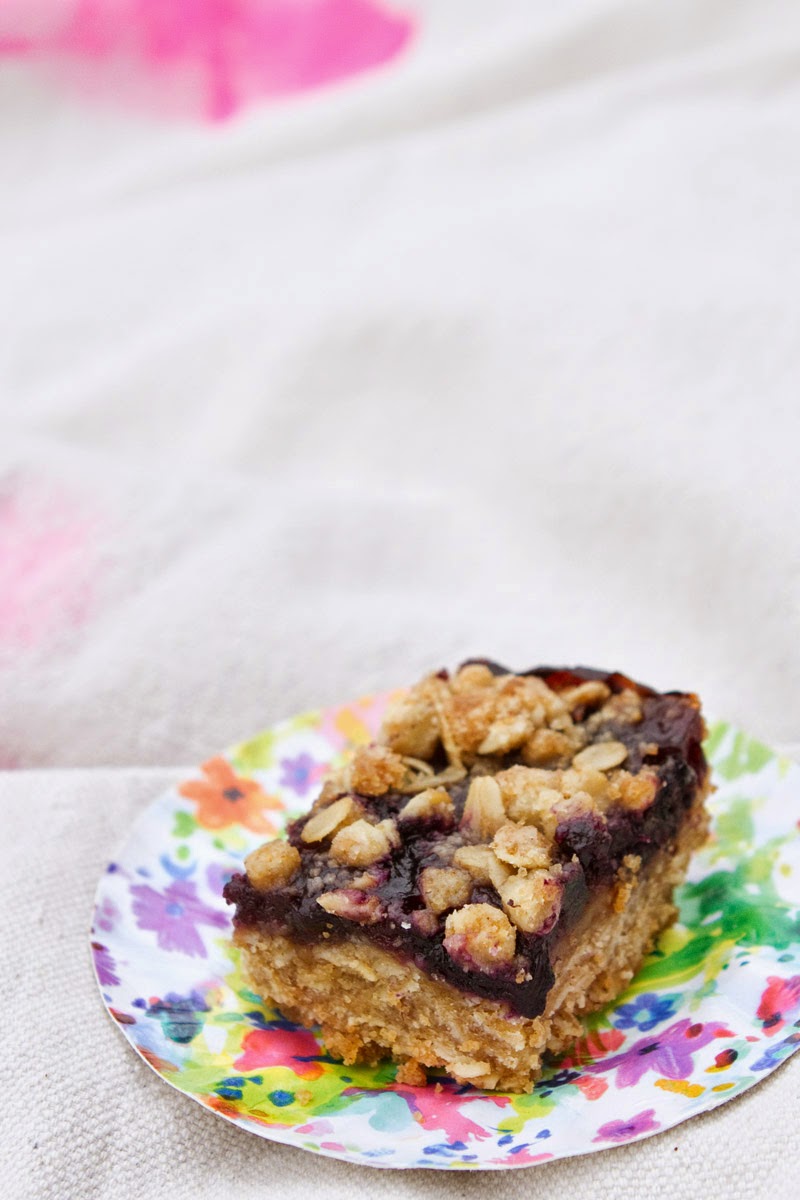 Jam bars are a close cousin to my other favorite super-simple dessert, fruit crisps, which are a staple of my winter dessert repertoire when the frigid weather calls for piping hot baked apple slices covered in oat streusel. But in the summer I like jam bars, which you eat only after they cool, and which are lovely made with summer fruits, like raspberry and blueberry. 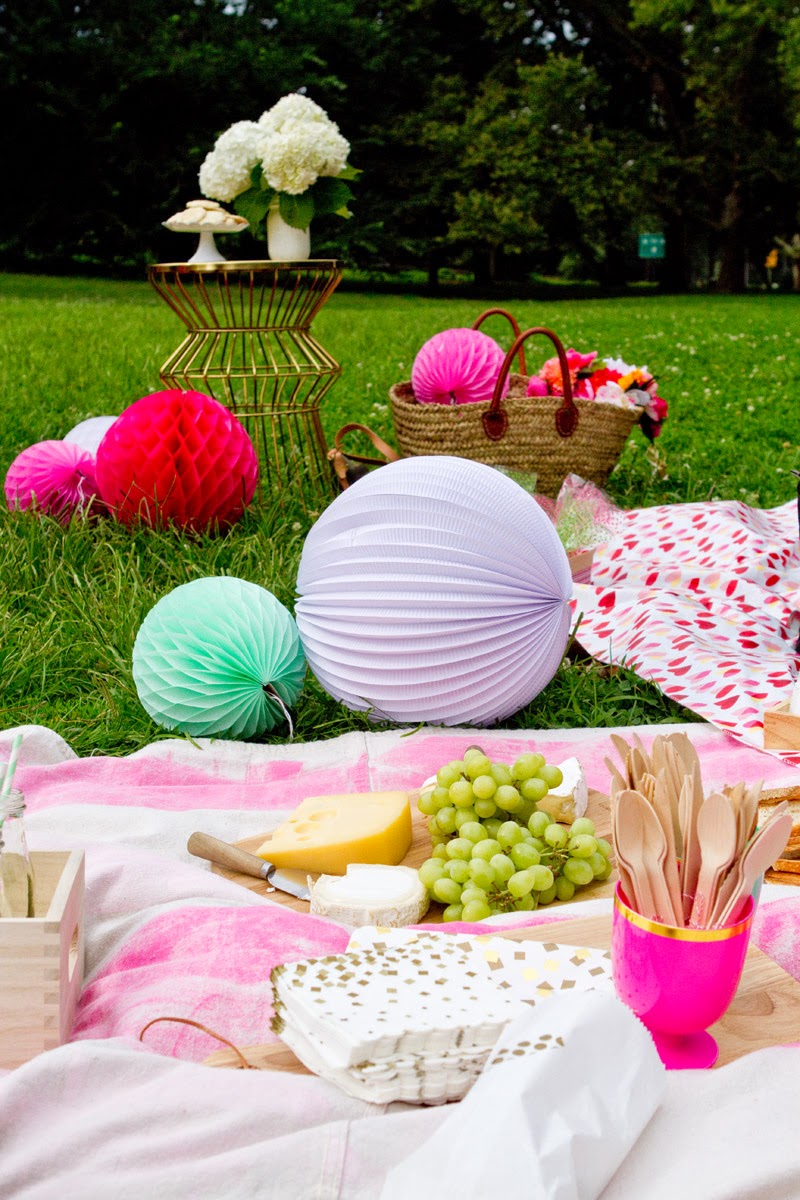 I took these jam bars a step further than usual by using brown butter. If you've never browned butter you have to try it. It takes just a few extra minutes of work and it's incredible all nutty and golden and toasty tasting. The five extra minutes browning the butter are more than worth the effort when you share these bars and amaze everyone with their deliciousness. 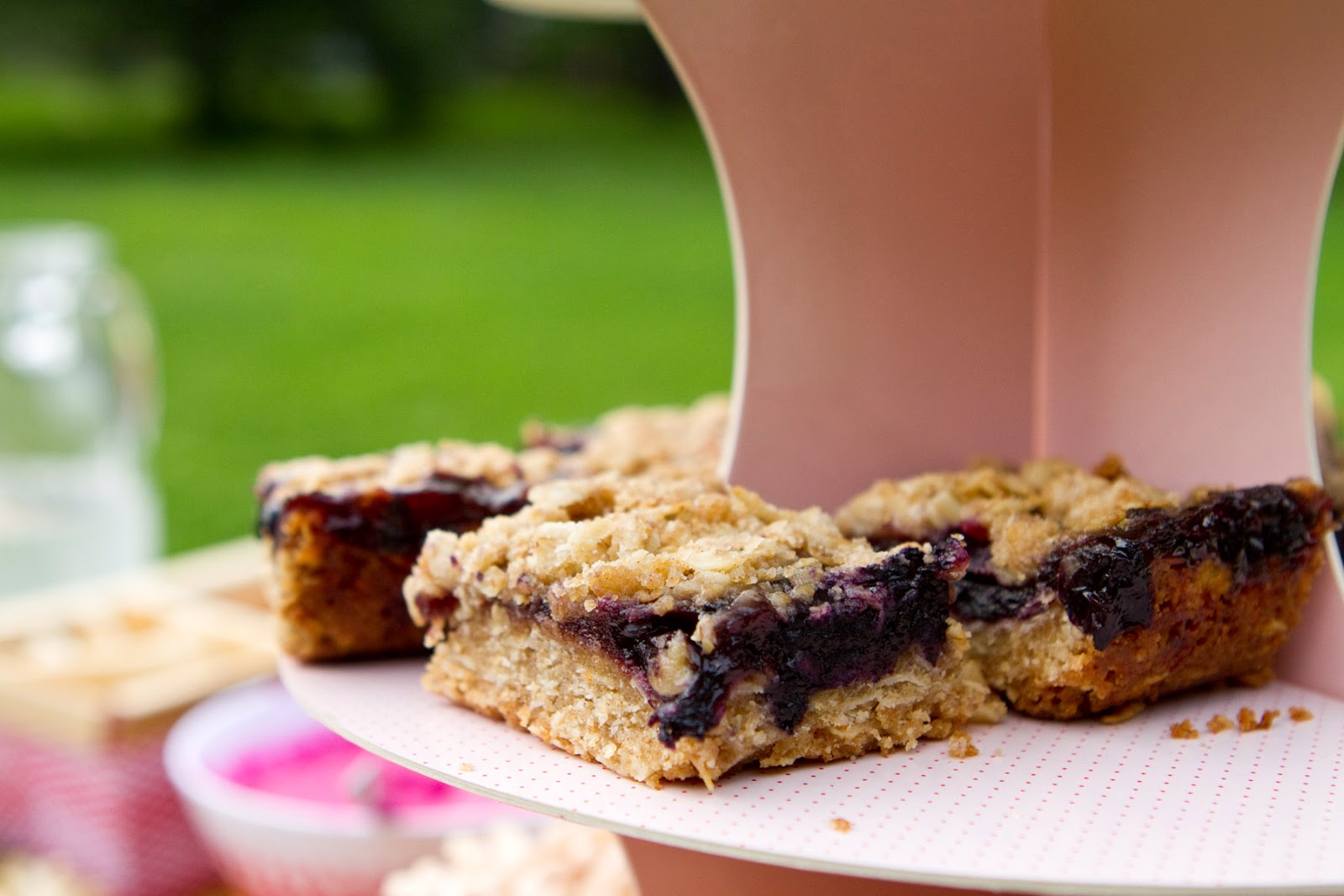 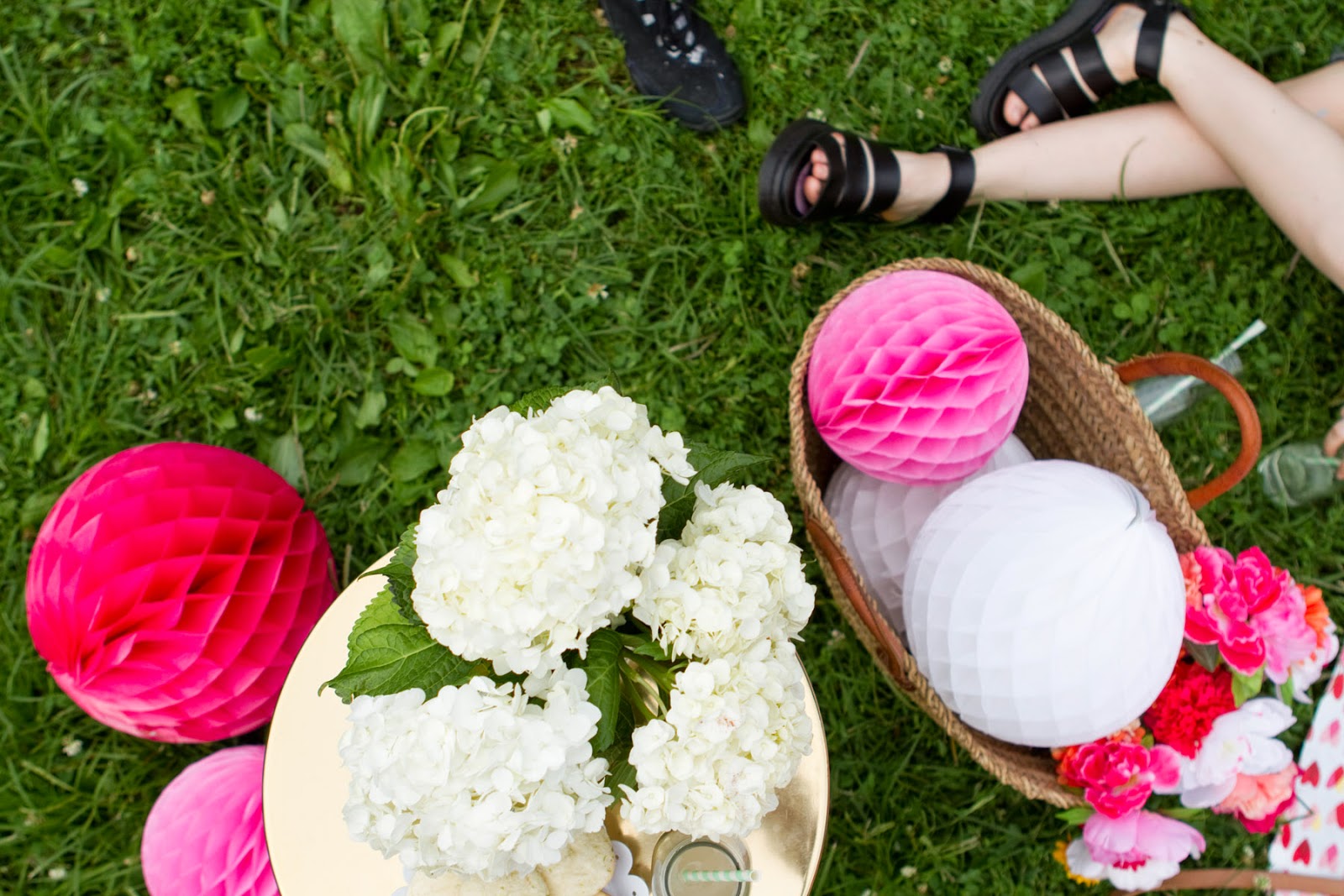 These held up wonderfully being transported to the meetup, and stood up well to the midsummer heat, so they'd be a lovely choice for a cook out or potluck. I like to make these for dinner parties because they can be cooked the night before. Just try not to eat them all before serving! 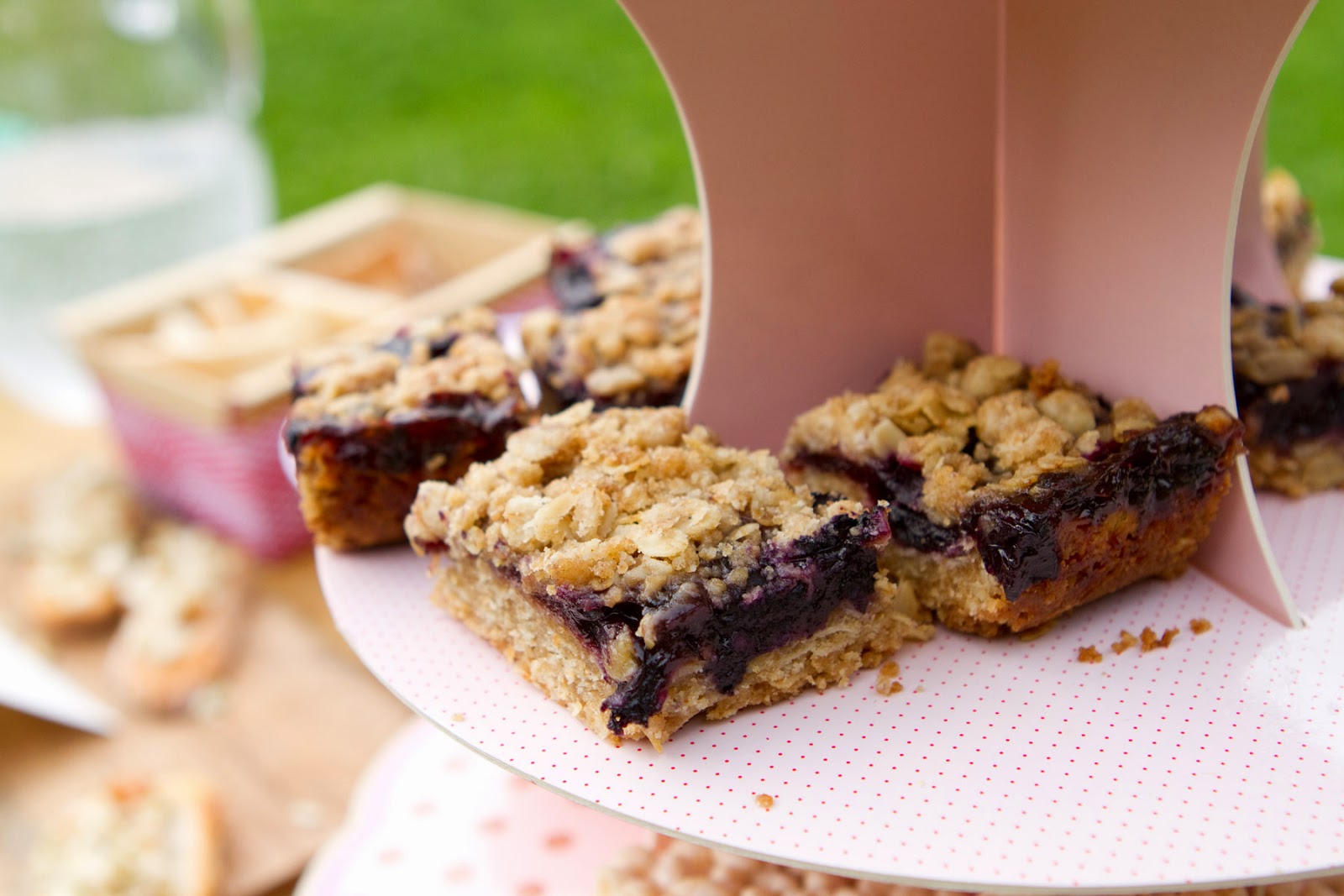 
Preheat Oven to 350F.
Cut sticks of butter into 1 tbsp sized pieces and add to a heavy bottomed pan. Heat over medium-low heat, stirring occasionally. Keep your eyes on the butter once it's melted, as it can go from melted to browned quickly. The butter will melt, turn clear, get foamy, then start to turn a rich golden brown and smell nutty. When butter begins to brown turn off heat and stir butter around a bit, then remove from heat. Set aside while preparing dry crust ingredients.

In a large bowl, combine all the dry ingredients for the crust, the oats, 1 3/4C flour, baking powder, brown sugar, and cinnamon. Pour in the browned butter and stir until well incorporated.

Press 2/3 of the crust mixture into a buttered 9x13 pan, making a crust of even thickness. Bake for 10-15 minutes, until lightly browned.

While crust  bakes, in a medium bowl, combine jam, blueberries, and 2 tbsp flour. Stir well until combined. Pour over crust after baking, spread out into an even layer. Crumble the remaining 1/3 of the crust mixture over the top of the jam, lightly covering it. Bake for 20-30 minutes, until crust has browned thoroughly. Remove from oven and allow to cool completely  (for several hours) before cutting.

Posted by Little Market Kitchen at 6:44 AM