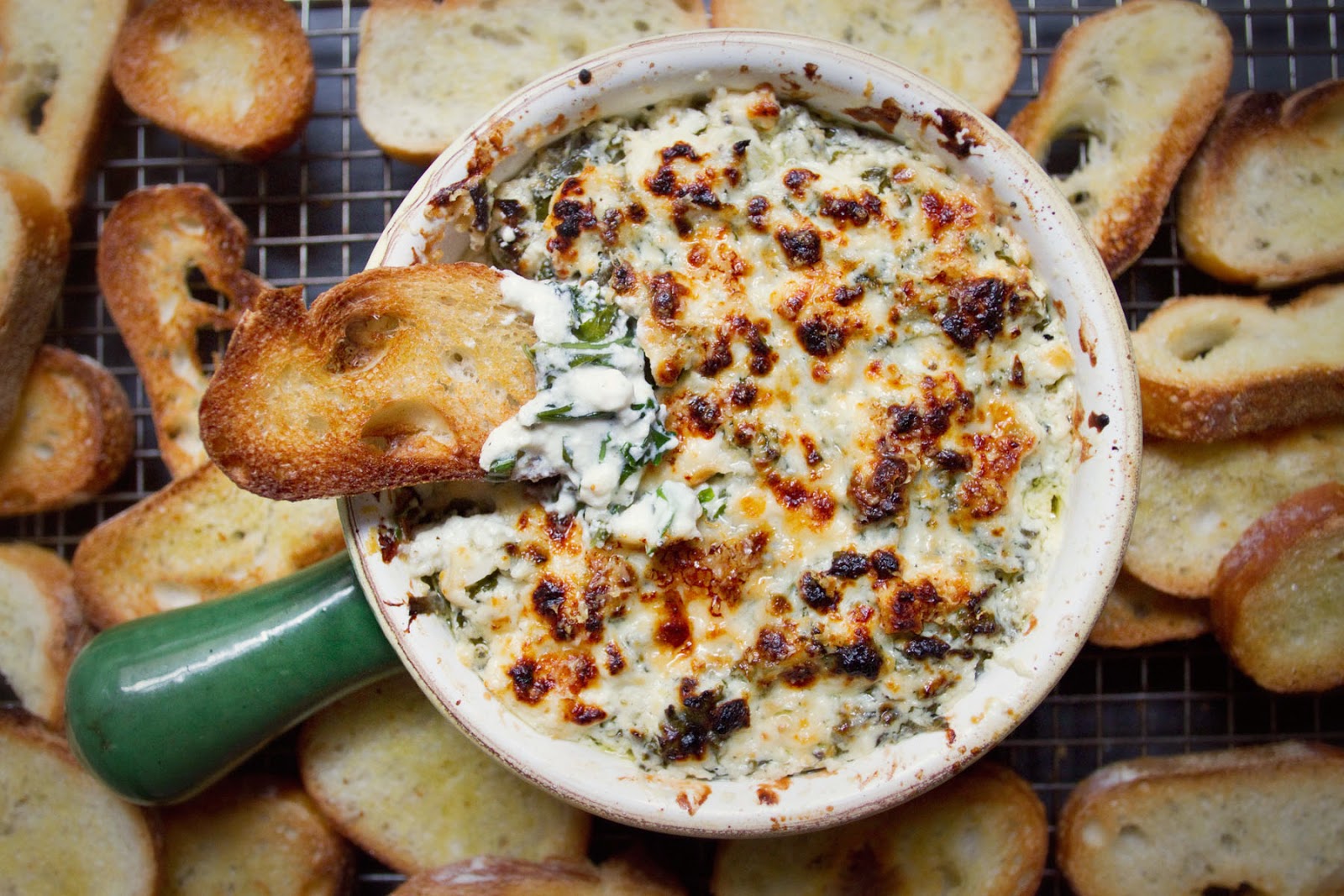 This dip is heavenly. I had the idea for it while scavenging in the kitchen for something to put on a leftover baguette. I could only find feta and olive oil, so I melted the feta in a bit of olive oil, microwaved it, and we gobbled the lumpy, bubbly mixture up on our day old baguette. 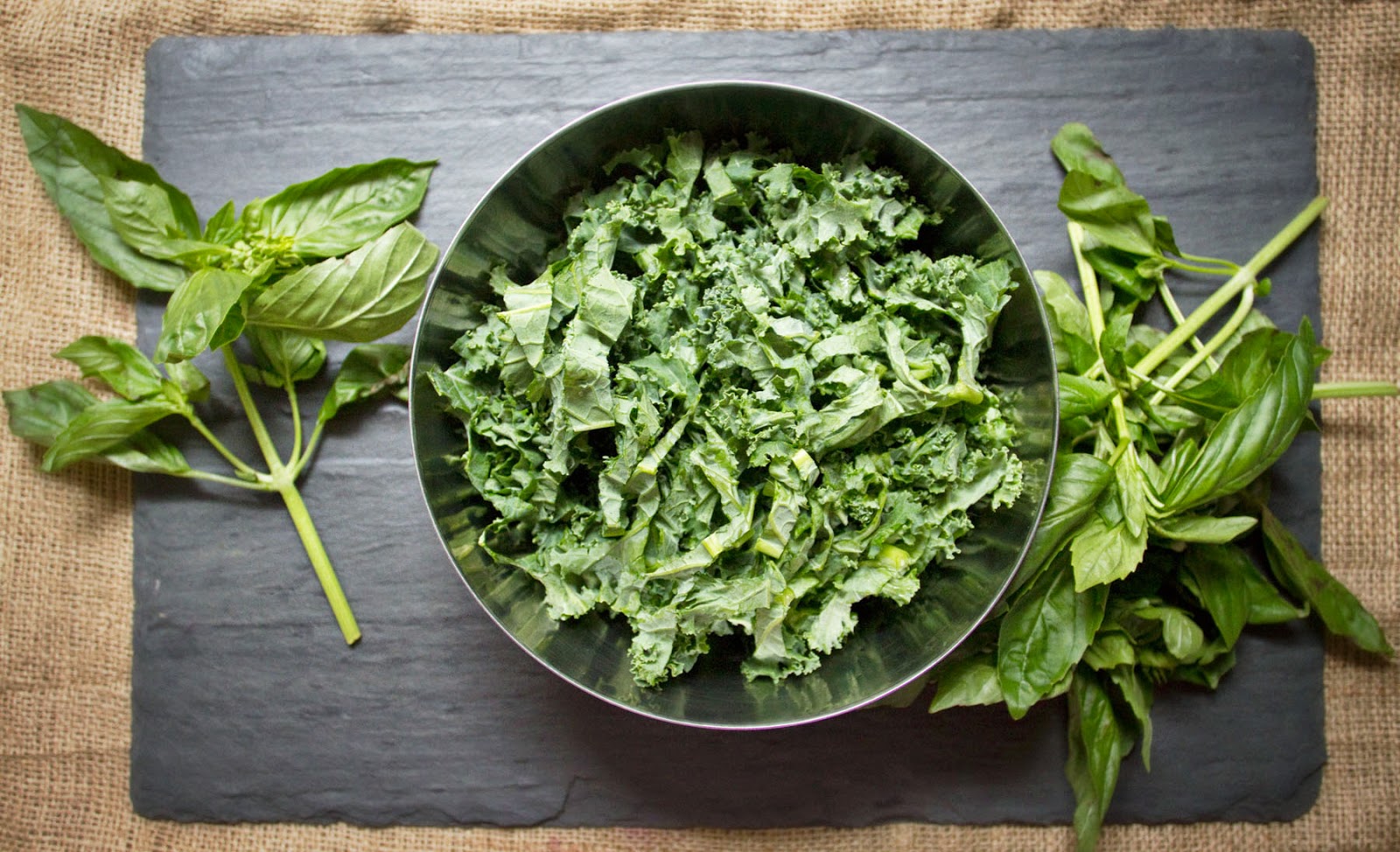 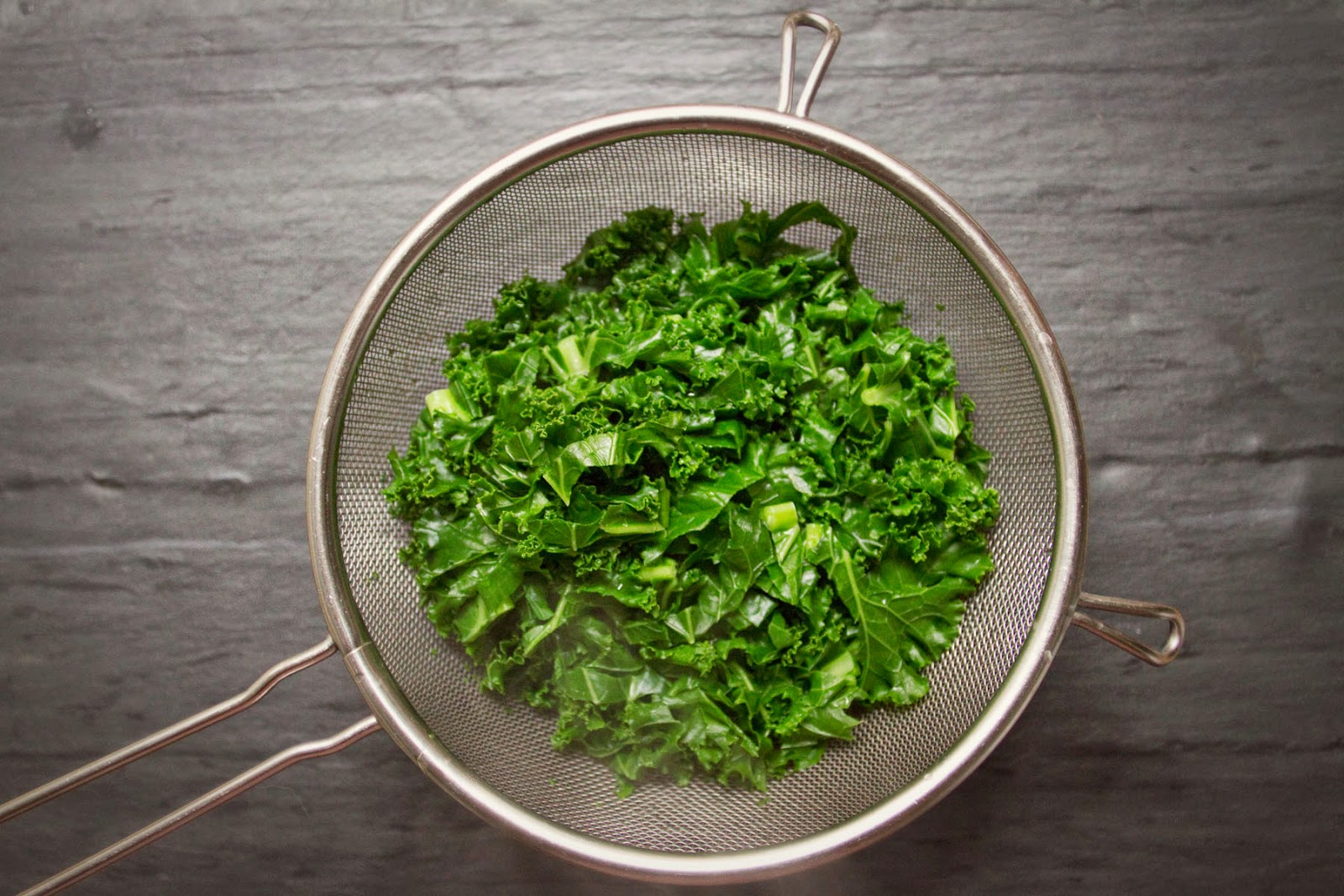 The snack was delicious, but a bit oily and salty, so I started thinking about how I would improve the feta dip, if I made it again. First I thought of greek yogurt, then S thought of cream cheese. Then I realized the answer was to use both. 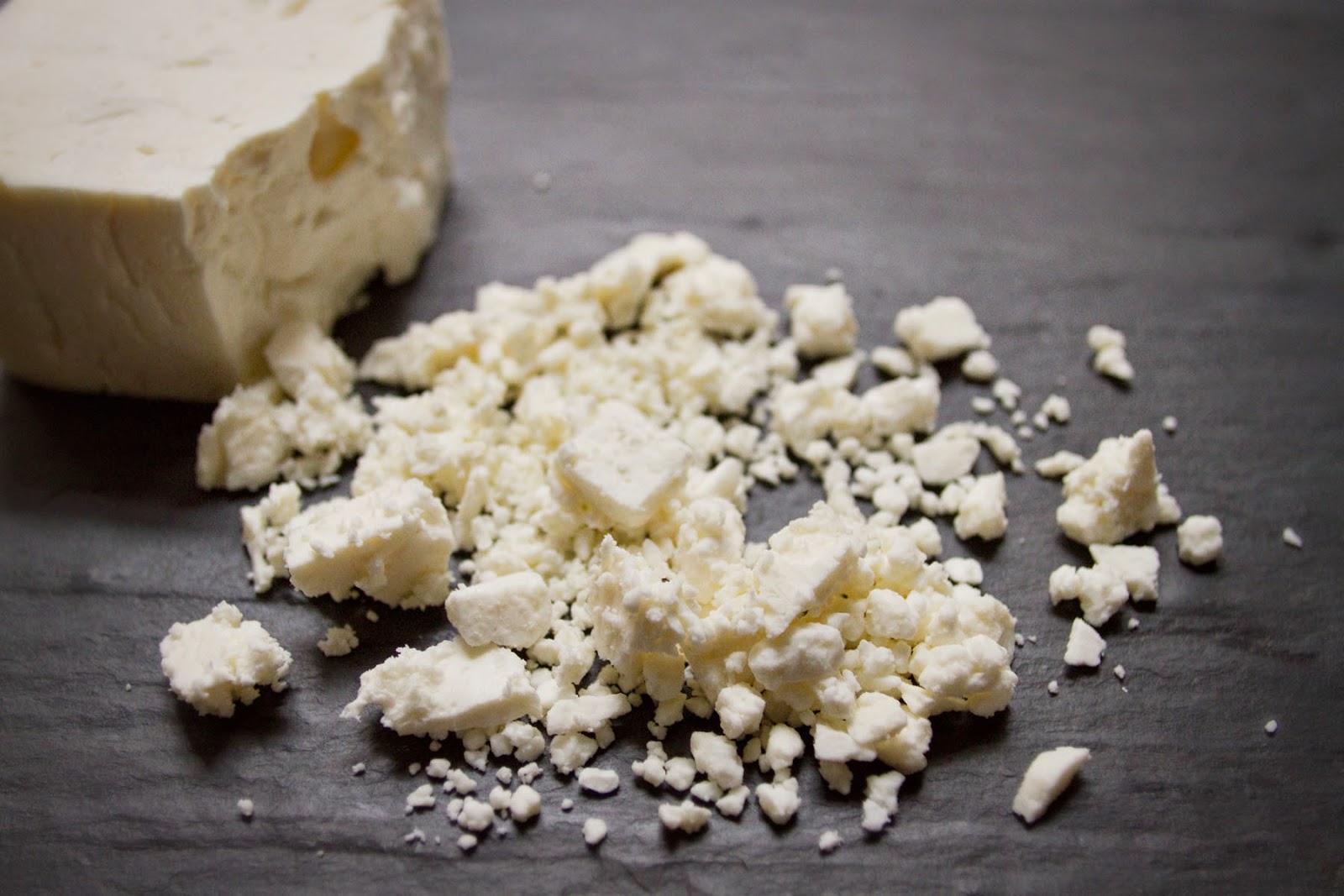 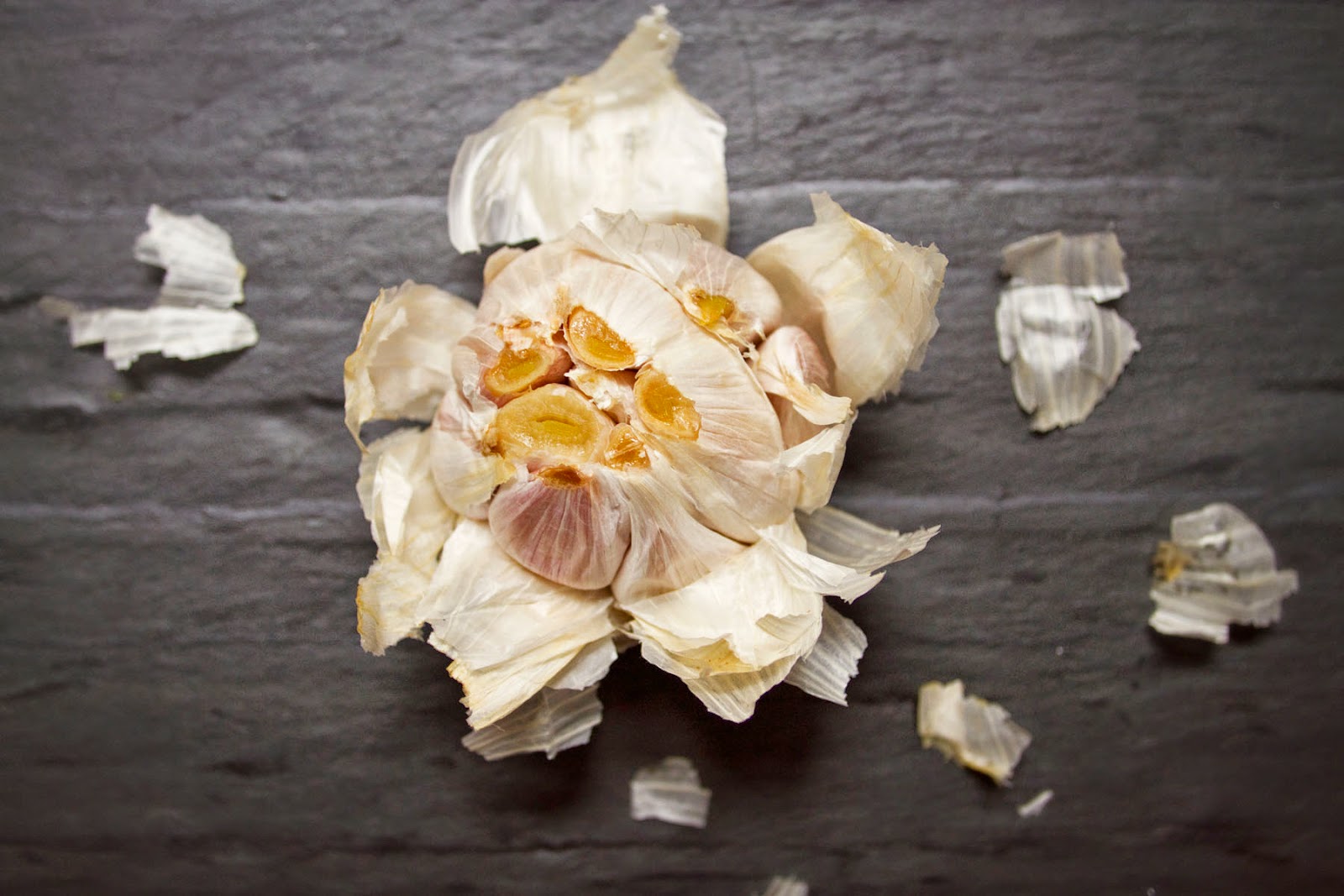 Somewhere along the line I decided to add roasted garlic for its warm, rich flavor, and kale because I pretty much think kale goes in everything. And then I baked it instead of microwaved, so it would get all beautiful and brown and toasty on top. 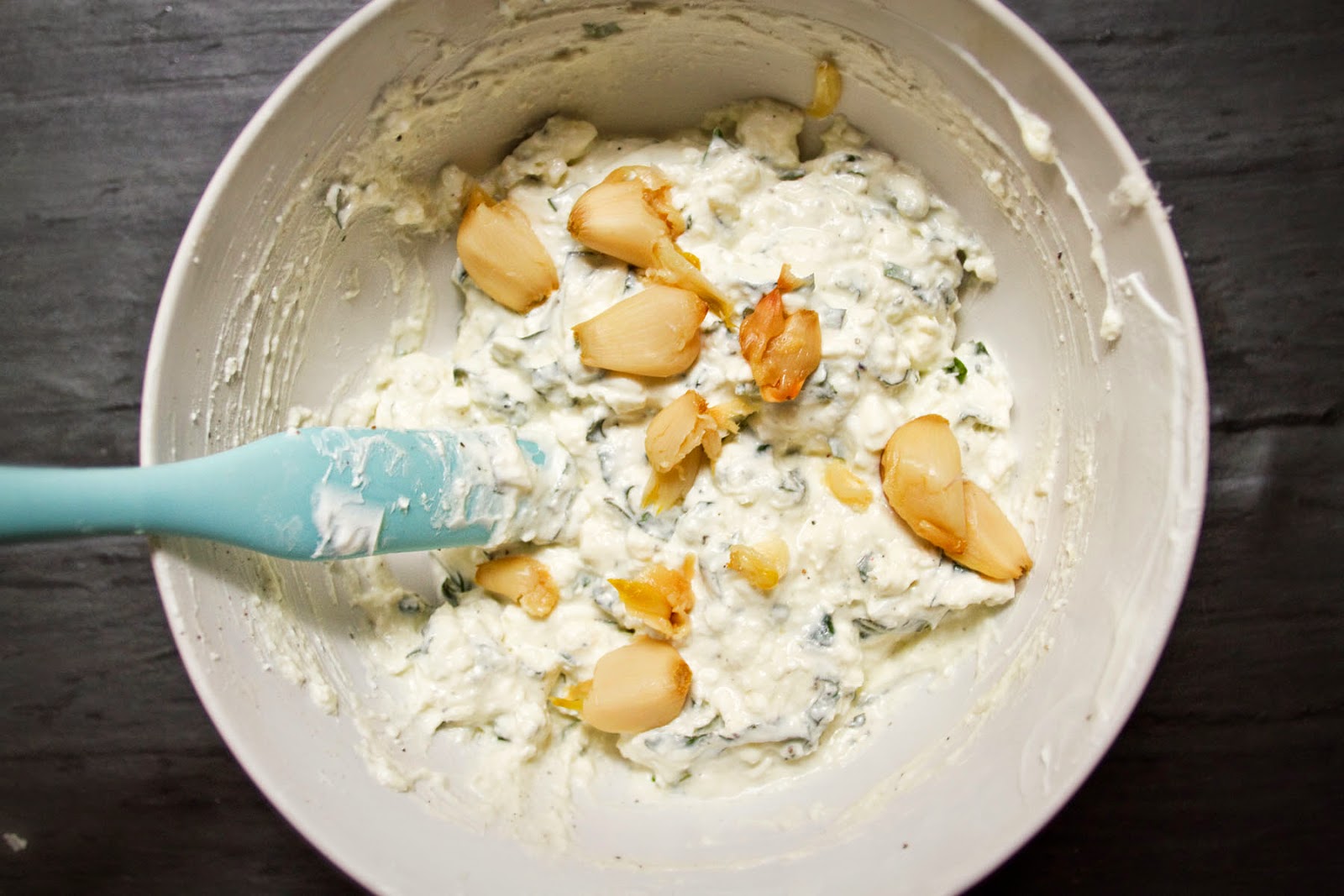 If you're wondering where I was last week, I took a short hiatus to celebrate my 26th birthday by going skiing in Vermont with my father. It was fantastic, we had some great bluebird days, not a cloud in the sky, and some incredibly cold and windy days, and one really foggy and rainy day, but we skied through it all. 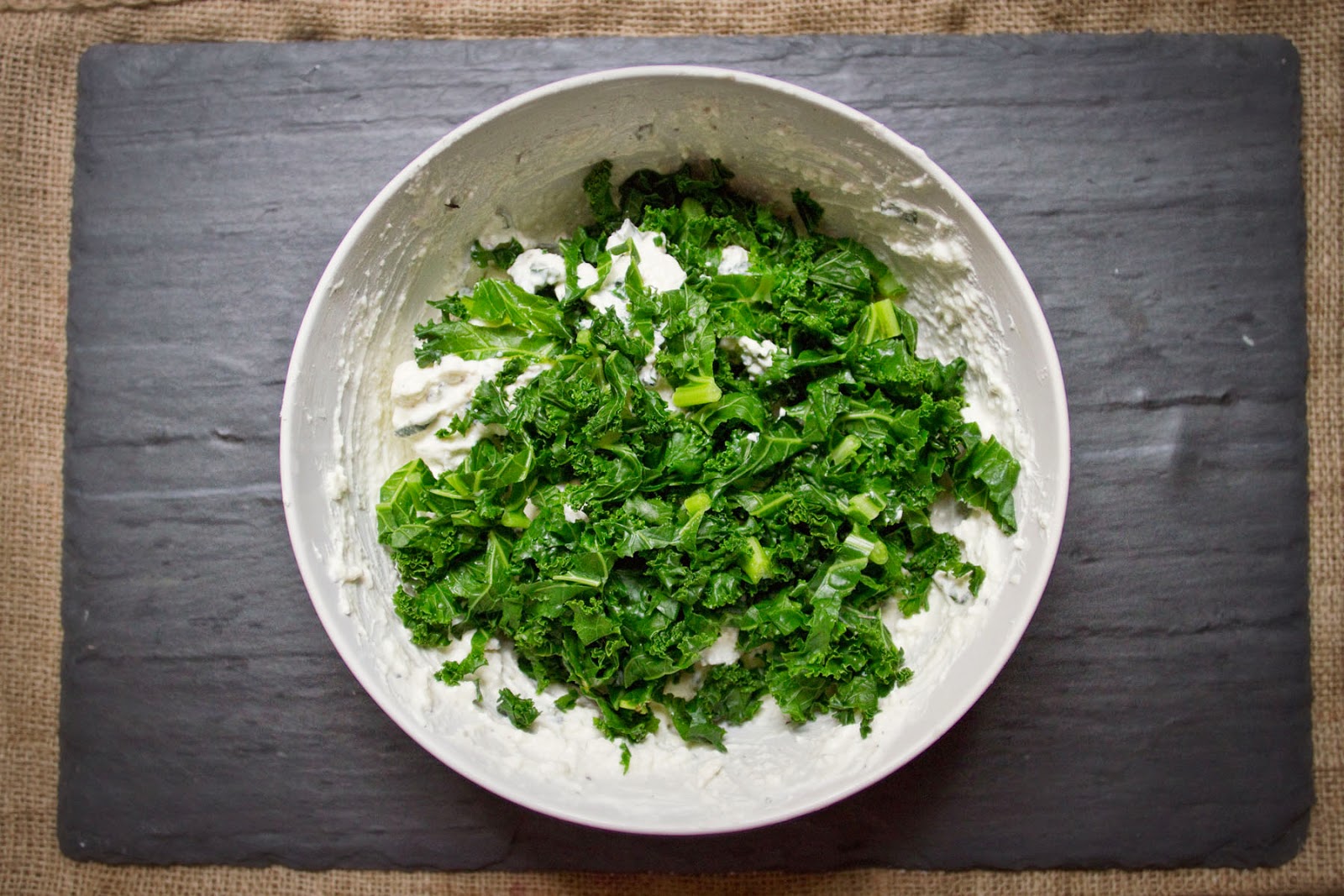 At a little restaurant in Manchester, VT, we had a curry-goat cheese dip one night, which came with eggplant fries. Typically I do not like eggplant, but this was deep fried eggplant, so I was willing to try it. 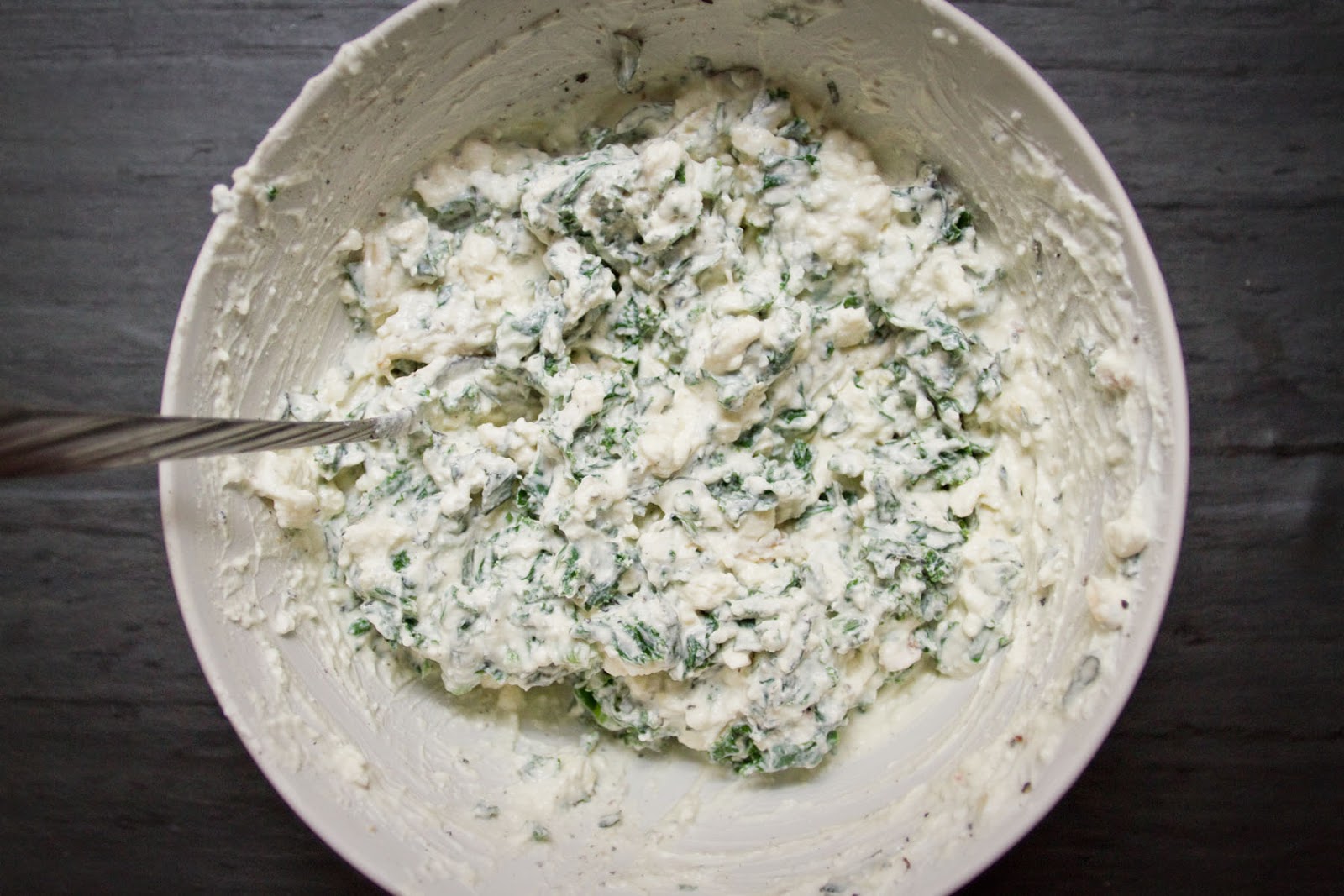 The eggplant fries turned out to be amazing. The dip was good, it tasted quite a bit like Chicken Makhani sauce, but the eggplant fries stole the show. They were crispy on the outside and hot and soft inside, and not too eggplant-y. I bet they would be super tasty with this dip. 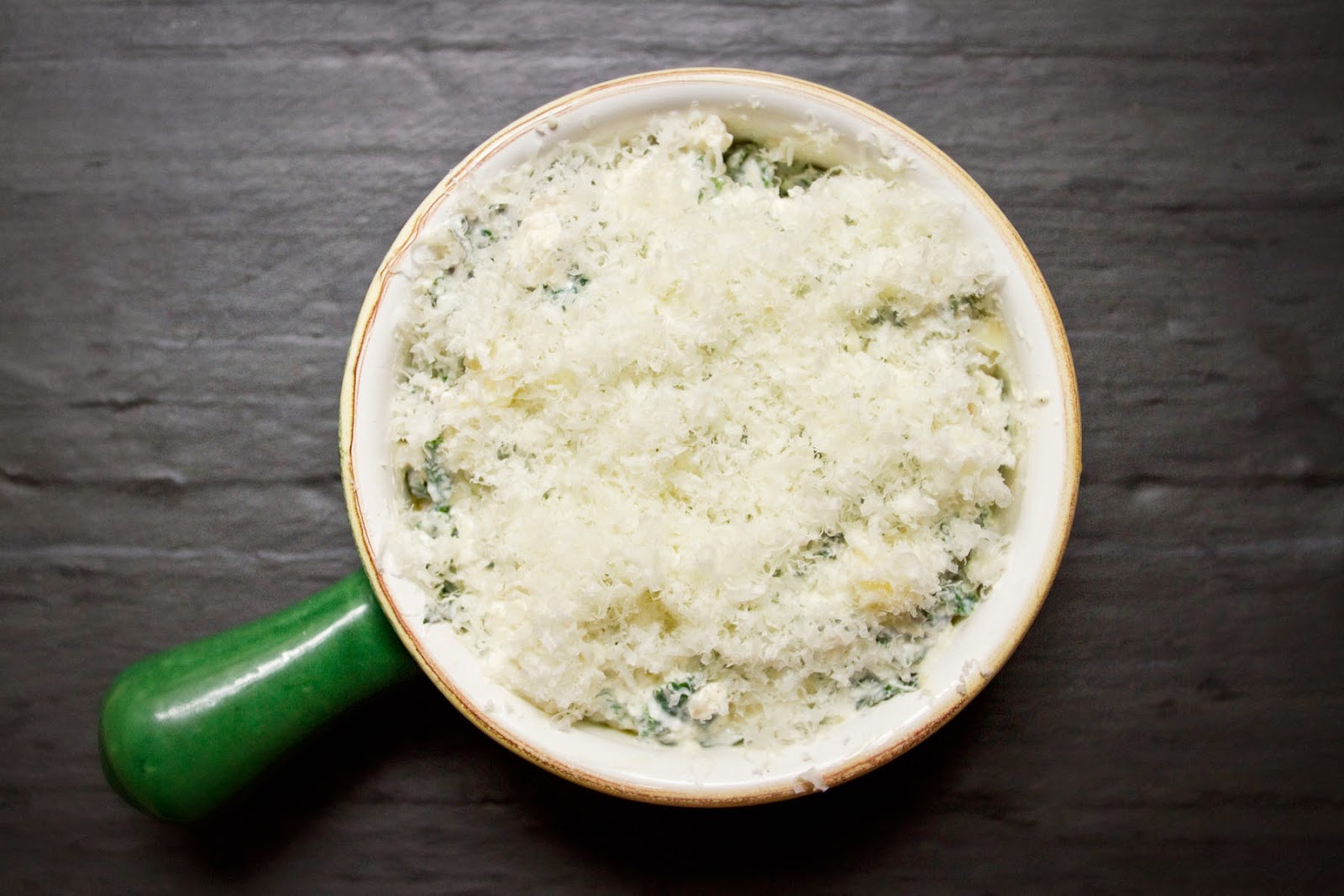 You could dip a lot of things in this kale-feta dip. Sliced baguette, toasted pita strips, carrot sticks, falafel chips (have you tried falafel chips? they're awesome), or pumpernickel bread. What else would you try? I bet it would be great on some of those fancy seeded crackers everyone is into lately. 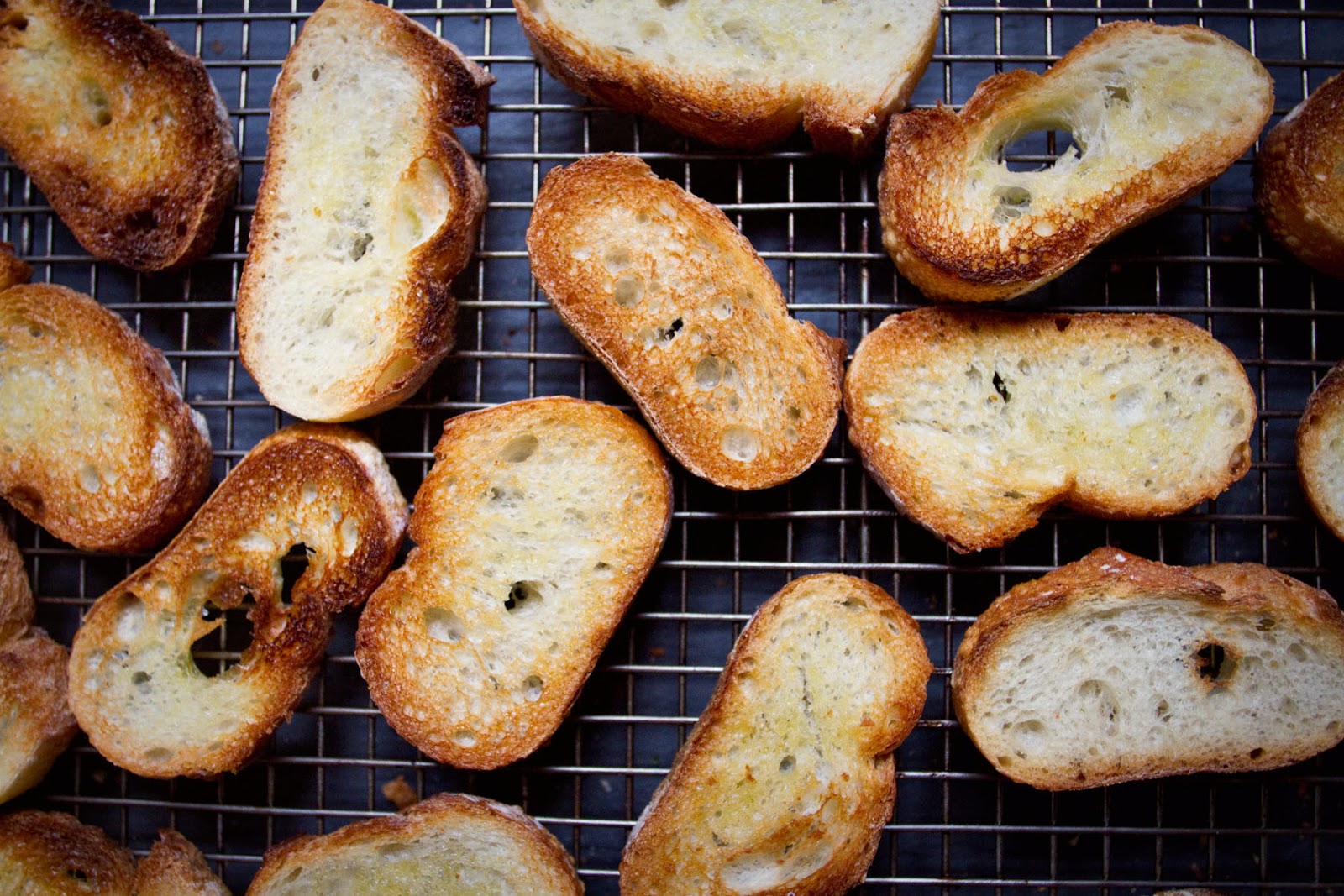 S and I debated what we wanted to eat the dip on, I said toasted pita, he said baguette. He won because baguettes are so delicious and perfect I can never resist the allure of french bread. I toasted my slices a bit to make them sturdier and easier to dip. I recommend this, especially if you're serving the dip to a party. 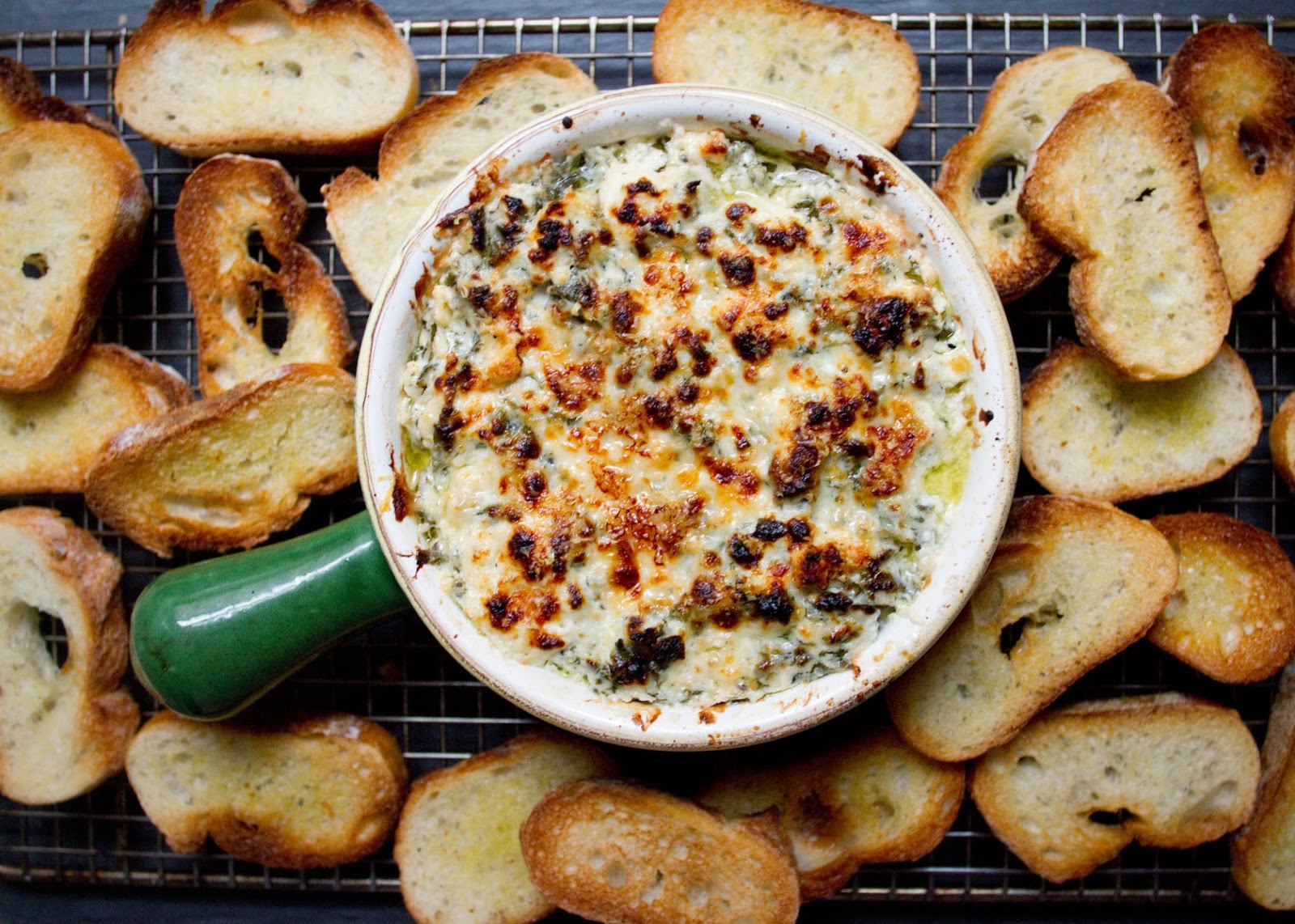 This dip would make an excellent appetizer at a dinner party, finger food at a cocktail party, and goes great as a game night snack (are there any sports on this time of year? I don't even know). Or, be like S and I and just eat it as a side dish at dinner. We had it at two different meals and in between popped the leftovers in the fridge, it warmed up just fine being put back into the oven. Enjoy! 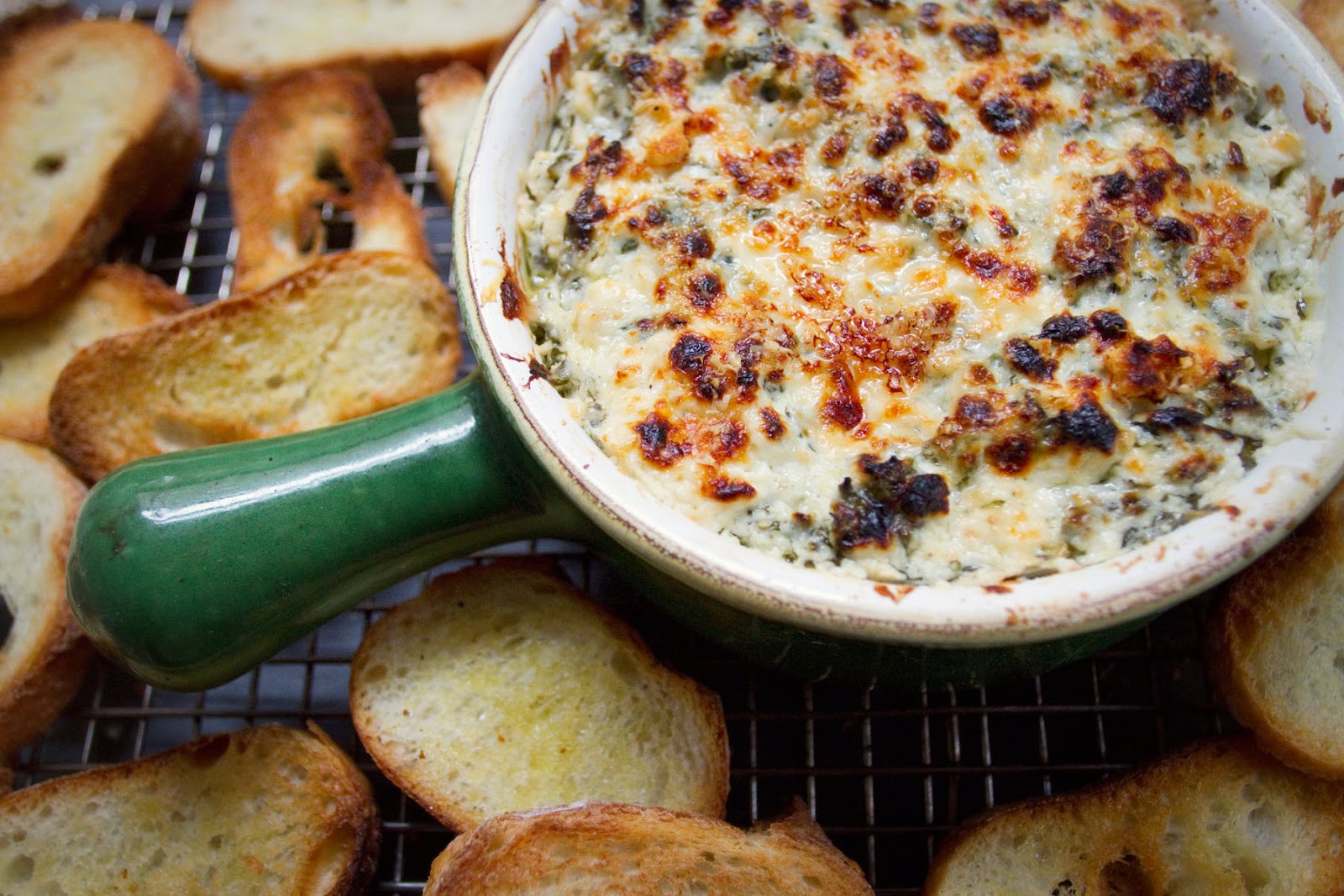 Warm Feta and Kale Dip
serves 4-5 as a side dish, or makes a lovely party appetizer

Begin by roasting the garlic. Preheat the oven to 400 degrees fahrenheit, place the garlic on a cutting board and cut off just the top of it, revealing the tops of each clove. Wrap in aluminum foil and place in the oven for 45 minutes to an hour.

While the garlic roasts blanch the kale. Place a large pot of water over high heat to bring to a boil. Wash kale, remove the rib from the middle of each leaf, then slice thin. I do this by stacking my de-stemmed leaves and rolling them up, then cutting across the roll. Once water is boiling, dump all your kale in it and mix it around for about 20-30 seconds, then drain. Do not over blanch the kale, it will cook more in the oven. Allow kale to fully drain while preparing the dip. You want it fairly dry when it goes in.

Slice the baguette into pretty thin slices and brush each slice with a small amount of olive oil. Place on a rack and toast in the oven alongside the garlic, about 3 minutes, or until the toast is nice and golden brown. Keep an eye on it to prevent burning.

When garlic is roasted through (the cloves will be soft and brown), remove from the oven, unwrap, and set aside. Turn oven down to 350 degrees fahrenheit.
Thinly slice the basil and crumble the feta, set aside.

In a large bowl mix the greek yogurt, olive oil and cream cheese, once smooth, add the cloves of roasted garlic. I squeeze mine to remove them from their papery skins., but peeling is also easy. Mash and mix the garlic into the dip. Add the feta and 1/2 the Romano cheese, and mix well. Fold in the basil and kale until well mixed.

Spoon the dip into an oven safe dish and top with the remaining Romano cheese. Bake in the oven for 20-30 minutes, or until bubbly and hot. Finish under the broiler for 3-5 minutes if you'd like to brown the top. 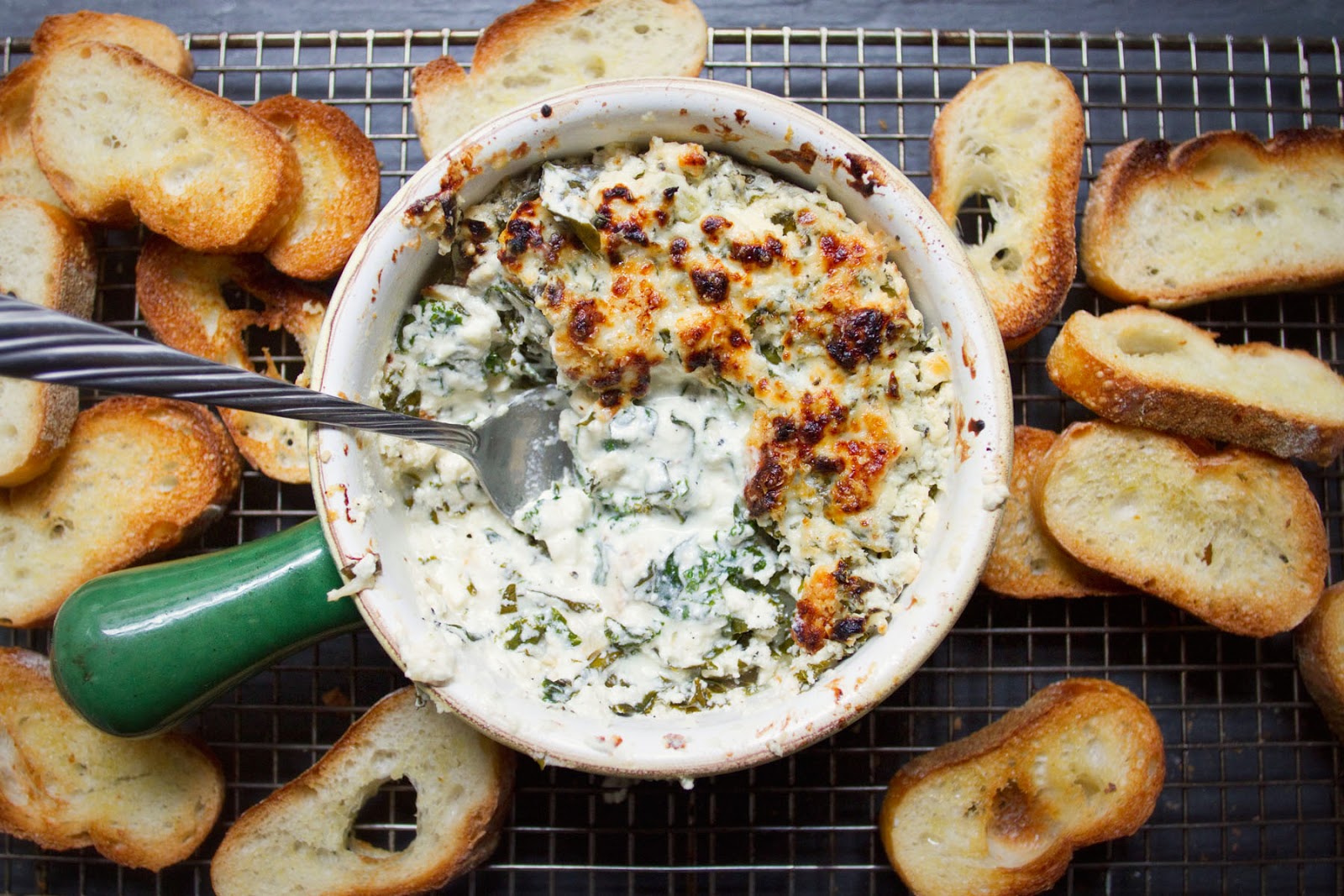 Posted by Little Market Kitchen at 6:48 AM